Dollar and Yen staged strong rebounds overnight, as stocks tumbled after US President Donald Trump halted stimulus talks abruptly. Though, markets somewhat stabilized in Asian session. Swiss Franc and Euro remain the strongest ones for the week for far but both have already pared back much of earlier gains. Australian and New Zealand Dollars are currently the weakest ones. More volatility are still anticipated ahead with eyes on US politics and coronavirus infections. It’s just early in October and more surprises could be lying ahead for us.

Technically, Gold’s breach of 1881.30 support is taken as a sign that Dollar might be coming back. Indeed, even Euro and Swiss Franc couldn’t take out near term resistance level against Dollar cleanly after yesterday’s decline. Focuses are now turning back to 1.1695 support in EUR/USD, 0.9218 resistance in USD/CHF to gauge the change for Dollar to resume recent rebound. The same goes for Yen. Break of 74.92 minor support in AUD/JPY would firstly indicate completion of rebound form 73.97 after rejection by 76.11 support. Secondly, the corrective fall from 78.46 is likely resuming through 73.97 in this case. 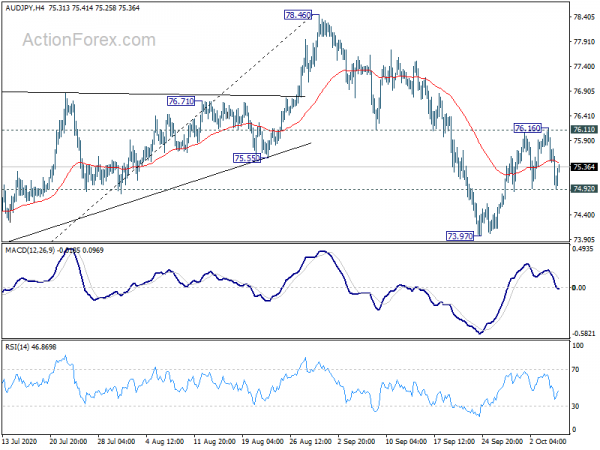 US stocks tumbled as Trump pulled out of stimulus talks

US stocks staged a reversal and tumbled sharply overnight after US President Donald Trump halted stimulus negotiations with Democrats, until after election. He revealed in a tweet “I have instructed my representatives to stop negotiating until after the election when, immediately after I win, we will pass a major Stimulus Bill that focuses on hardworking Americans and Small Business.” The USD 2.2 trillion price tag is an issue that some Republicans explicitly opposed to. Besides, they’re also against the bailout of state and local governments. Separately, Trump urged immediately approval of USD 25 billion bailout for airline and small businesses, with the unused funds from the Cares Act.

Gold rejected by trend line resistance, heading back to 1848 support 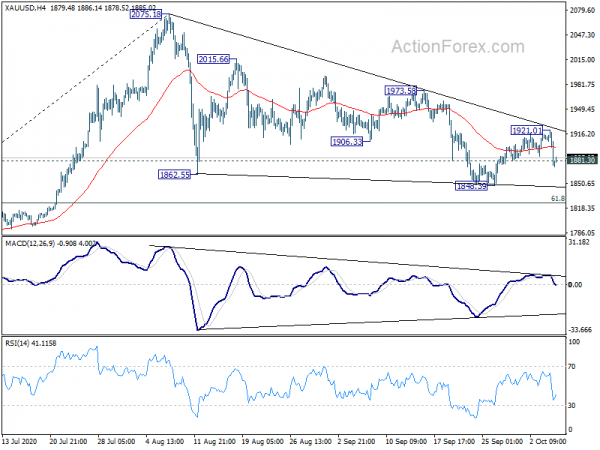 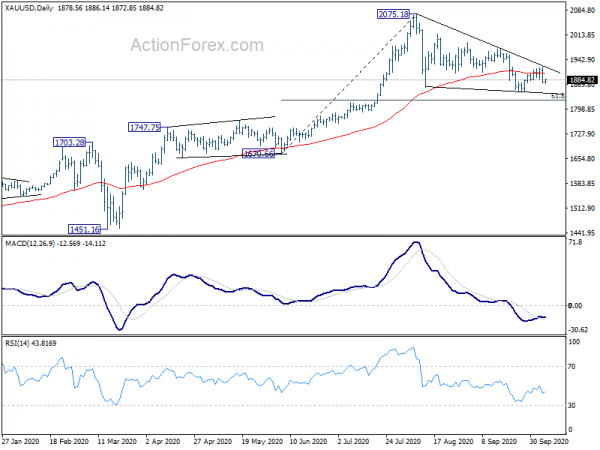 Fed Chair Jerome Powell said in a speech that the economic expansion is “still far from complete”. “At this early stage I would argue that the risks of policy intervention are still asymmetric,” he added. “Too little support would lead to a weak recovery, creating unnecessary hardship for households and businesses.”

Powell also noted, “the risks of overdoing it seem, for now, to be smaller. Even if policy actions ultimately prove to be greater than needed they will not go to waste. The recovery will be stronger and move faster.”

On the economy, Powell also said that the improvement has “moderated” and “risk that the rapid initial gains from reopening may transition to a longer-than-expected slog back to full recovery.”

Australia AiG Performance of Services index dropped to 36.2 in September, down from 42.5. Japan leading indicator rose to 88.8 in August, up fro 86.9, below expectation of 89.4. Germany industrial production dropped -0.2% mom in August, below expectation of 1.5% mom rise. France trade balance, Swiss foreign currency reserves and Italy retail sales will be released in European session. Canada Ivey PMI and FOMC minutes are the main features in US session.

Intraday bias in USD/CHF is turned neutral with 4 hour MACD crossed above signal line. Further fall is mildly in favor as long as 0.9218 minor resistance holds. Below 0.9133 will target a test on 0.8998 low. However, on the upside, break of 0.9218 minor resistance will argue that corrective rebound from 0.8998 is not completed yet. In this case, intraday bias will be turned back to the upside for 0.9304 resistance instead. 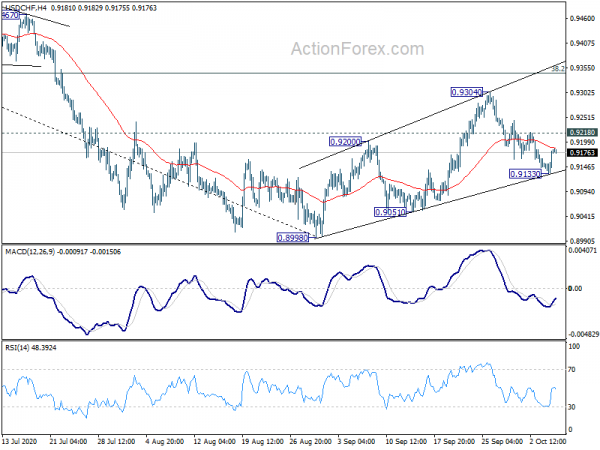 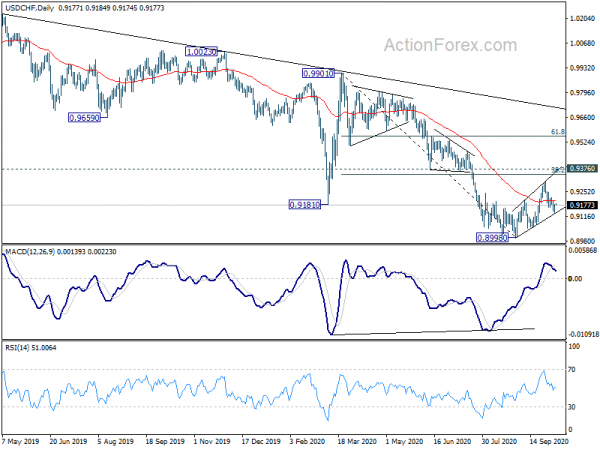