Yen had a U-turn today and breaks near term support level against Dollar. Resilience in treasury yield is seen as a factor for Yen’s weakness. After a brief set back yesterday, US 10-year yield looks set to extend recent rally through 0.78 handle. German 10-year yield is also trying to regain -0.5 handle too. Stock markets are relatively steady, with mixed European indices. DOW futures point to mild gain but it’s unsure whether it could reclaim 28000 handle. Staying in the currency markets, Euro and Swiss Franc are still the strongest for the week. New Zealand Dollar and Yen are now the weakest, followed by Sterling. Dollar is mixed, awaiting FOMC minutes for some guidance.

Technically, the risk of selloff in Yen crosses is eased for now. The first focus is on whether USD/JPY could extend the rebound from 104.00 to 106.94 key near term resistance. Then, second focus is whether such move would prompt stronger rebound in Yen crosses in general, or translate into Dollar strength elsewhere. Or, say, rise in USD/JPY and EUR/JPY would keep EUR/USD in range below 1.1807, just like what USD/JPY did below 105.80 a while ago.

In a written interview with Harvard International Review, ECB President Christine Lagarde said the pandemic is a “common global shock” but the “local impact is going to be uneven”. Output losses in H1 ranged from less than -11.5% in Germany to more than -22.7% in Spain. These differences “reflect both the severity of the outbreak, the design of the national response – itself a function of diverse fiscal positions –, the economic structure, the sectoral activity, the fiscal absorption capacity and the resilience of the corporate and financial sectors.”

“It is clear that the crisis might leave behind a legacy of even more pronounced divergences among the economies of the euro area than we have observed so far. Countries will return to pre-COVID GDP levels at different points in time, some earlier, some later. Those countries set to struggle for longer with the aftermath of the pandemic shock will likely suffer from deeper and longer-lasting scars. All this risks prolonging and even entrenching structural heterogeneity within the euro area.” She added.

That’s the reason why the Next Generation EU recovery package is “so critical. It has a “dual function”, supporting depend and increase the structural resilience and growth potential of the “entire area”.

For Europe, US and the UK, the risk is that “we undershoot inflation targets. Also, she warned, the the full recovery from the pandemic could be hindered by stretched budgets of governments around the world..

UK Trade Secretary Liz Truss told LBC that the UK was “very clear” about the deal they want with the EU. That is a “Canada style deal where we control our own rules and regulations, we are not subject to the European court and we get a good deal on fisheries.”

“There’s a deal there to be done and I think it makes sense for the EU and the UK to sign that deal. But what I’m doing as trade secretary is making sure we’ve got options,” she added. “So we are working on a deal with the United States, we’re working on a deal with the trans-pacific partnership, because what I want is for British exporters to have lots of markets where they can send our fantastic products.”

Separately, Prime Minister Boris Johnson told the parliament, “this country has not only left the European Union but on January 1 we will take back full control of our money, our borders and our laws.”

Intraday bias in USD/JPY remains on the upside at this point, for 106.94 resistance. Current development argues revives the case that down trend from 111.71 has completed on bullish convergence condition in daily MACD. On the upside, break of 106.94 resistance will confirm and turn outlook bullish. On downside, break of 104.94 support is needed to indicate completion of the rebound. Otherwise, further rise will remain mildly in favor in case of retreat. 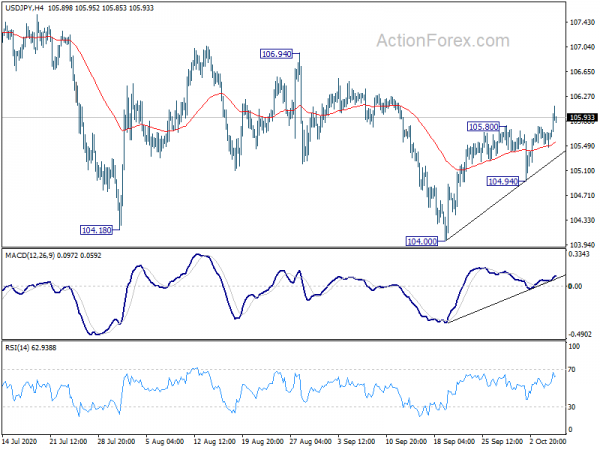 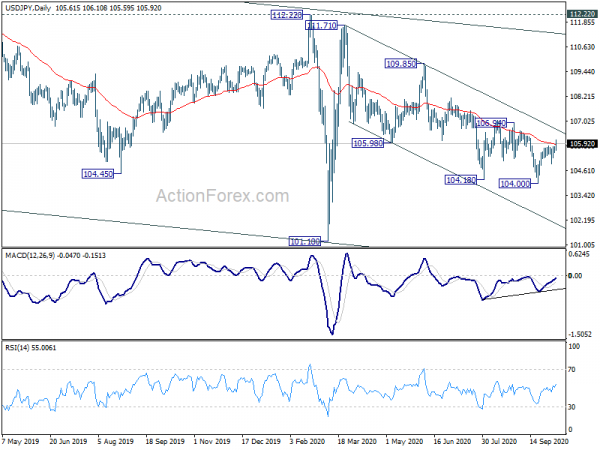