Yen Rebounds in Quiet Markets, Politics to Drive the Week

Asian markets are trading in mixed most, decoupling from strong rally from the US on Friday. The forex markets are also steady. Yen is trading broadly higher and could be riding on the rebound against Dollar to strengthen elsewhere. Dollar is the currently the second strongest for today but it’s merely licking last week’s wounds. Commodity currencies are mildly lower for now, digesting last week’s gains. The economic calendar is light today with US and Canada on holiday, but volatility could still kicks in with political news.

Technically, USD/JPY is an interesting one to watch today as it’s getting more likely that rebound from 104.00 has completed, with break of a near term trend line. Further rise will remain in favor as long as 104.94 support holds. But a firm break there would bring retest of 104.00. In that case, we’d have to see if that triggers selloff its Dollar itself, or more general decline in Yen crosses. 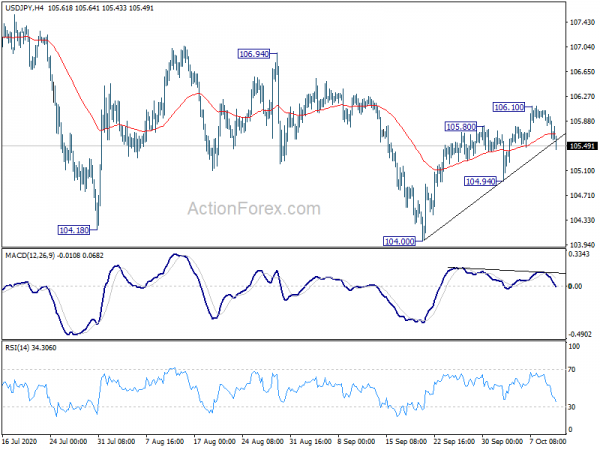 ECB Chief Economist Philip Lane said in a WSJ interview that inflation outlook not satisfactory and the central bank would decide on the next move on a “meeting by meeting” basis. Even if inflation does climb to 1.3% in 2022 as in ECB’s projections, it would stay well below the 2% target. There ares speculations that ECB could expand the PEPP program by year end.

“The current inflation level remains far away from our goal,” Lane said . “We don’t think that is a satisfactory inflation outlook.” “I wouldn’t focus on any one meeting… It’s not the case that we only look at the formal projection rounds.”

Lane also noted that the next phase of the economy is “going to be tougher”. “The big question, and this is why there is so much uncertainty, is: how quickly can the current dynamic, with rising cases, be stabilized.””Some of that uncertainty will be resolved this autumn,” he added. “We will know the fiscal plans, we will know more about the pandemic.”

ECB Governor Council member Ignazio Visco told  Il Corriere della Sera newspaper, “price changes tend to be very low, if not negative, and a gap has been created with our goal of price stability, with effects that can be dangerous”. Because of this, monetary policy “monetary policy must be expansive and remain so for a long time”.

Currently, ECB is adopting a price target of “below of close to 2%”. Visco said it’s “vague and difficult to understand.” He’s in favor of a change to a medium term symmetrical 2% target.

Visco, also the governor of the Bank of Italy, expects the Italian economy to recovery with around 5% growth next year. But he warned of a prolonged decline in demand and policymakers must “do everything to reduce uncertainty.

Separately, Italian Health Minister Roberto Speranza said on Sunday that the country is preparing for fresh restrictions as new coronavirus cases surged again. Though, he added, “now we need a change of pace, and to intervene with measures, not comparable to those adopted in the past, which could allow us to put the contagion under control and avoid tougher measures later on.”

Japan’s corporate goods price index dropped further to -0.8% yoy in September, down from -0.6% yoy, missed expectation of -0.5% yoy. Wholesales prices also dropped -0.1% mom, indicating risk of upstream deflation. “With the global economy still reeling from the pandemic’s pain, the pace of its recovery remains modest. That will weigh on Japan’s wholesale inflation,” a BOJ official told a briefing.

Politics will be the main focuses this week while economic data would take a back seat. US election and stimulus negotiations could be most market moving. Over the Atlantic, Brexit negotiations would continue while the mid-Oct deadline looms. Resurgence of coronavirus infections and the risks of more return to restriction would catch much attentions too.

On the data front, Germany ZEW, China trade balance, Australia employment, US inflation and retail sales will be mostly watched. Here are some highlights for the week: 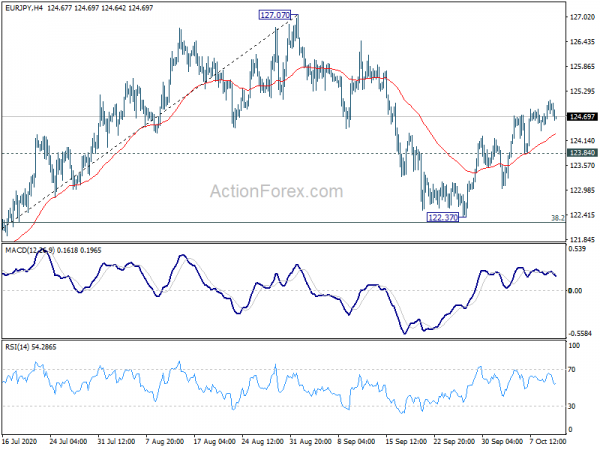 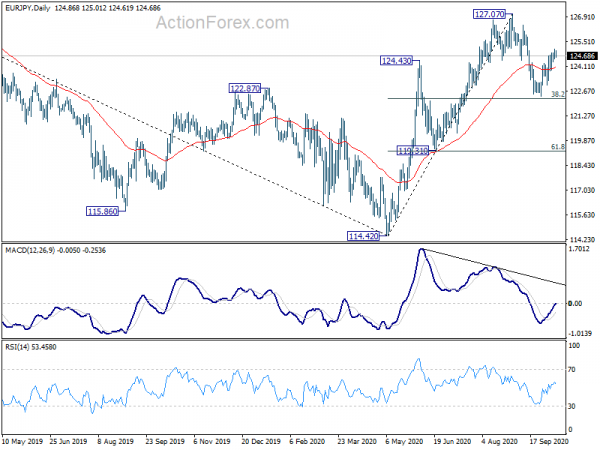