Dollar recovers mildly in relatively quiet markets today while Aussie and Euro turn softer. But major pairs and crosses are generally keep well inside Friday’s range, suggesting limited movements so far. Three central banks will meet this week including BoC, BoJ and then ECB. Lots of heavy weight economic data will be featured too including GDP from US and Eurozone. In the background, the themes of US election and stimulus, Brexit negotiations and coronavirus resurgence are ongoing.

Technically, a point to note is that while Dollar was sold off broadly last week, it’s held above recent lows against all major currencies. Gold also failed to break through 1933.17 resistance but reversed. If the selling doesn’t resume and push the greenback through near term support levels, we might indeed see Dollar bearish lighten up their positions ahead of next week’s election. That is, there is prospect of a rebound in the greenback later in the week. However, some levels need to be taken out firmly before taking the rebound, if happens, seriously. In particular, 1.1688 support in EUR/USD, 106.10 resistance in USD/JPY and 1872.82 support in Gold are key. 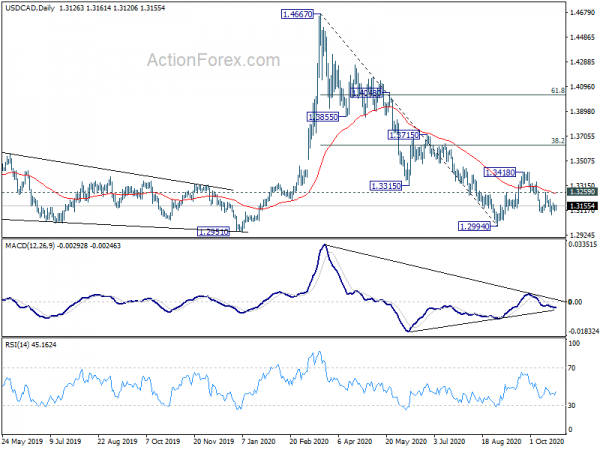 BoJ is widely expected to keep the parameters of the yield curve control unchanged this week. Short term policy rate would be held at -0.10%. JGB purchases will continue without upper limit to keep 10-year yield at around 0%, with fluctuations allowed to some extent. Goushi Katakoa will continue to be the sole dissenter, pushing for more monetary easing.

Governor Haruhiko Kuroda would maintain the assessment that the economy is on track to recovery from the coronavirus pandemic. Yet the path would remain highly depend on infections. There are, though, some expectations that BoJ would downgrade inflation forecasts. for the current fiscal year. With new Prime Minister Yoshihide Suga’s Go To Travel campaign that offers subsidized domestic travel, there is downward pressure on prices. But the temporary move in prices wouldn’t alter BoJ’s plan for now.

Yen’s path has decoupled from US treasury yield recently. But the next move would still be in-sync with overall risk markets, which is heavily affected by the outcome of US election. AUD/JPY is staying in the corrective pattern from 78.46. While selling hesitated ahead of 73.97 support, we’d anticipate an eventual break to the downside for 38.2% retracement of 59.89 to 78.46 at 71.36. 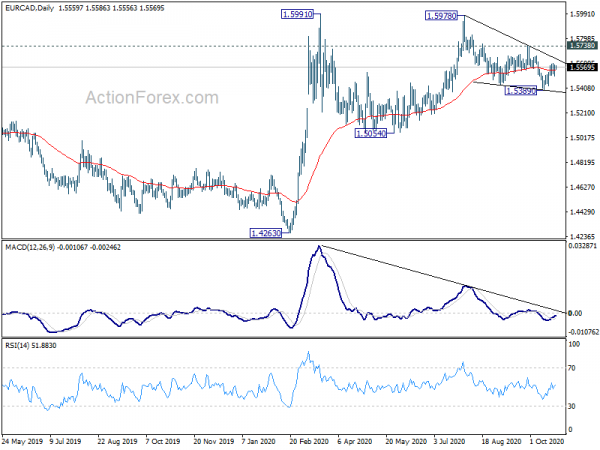 The Eurozone economic is facing much risk of double-dip recession with the resurgence of coronavirus infections. Tens of millions people are returning to restrictions which would hit the services industry particularly hard. Recent PMIs have already shown that recovery is faltering. Inflation has also turned into negative. ECB policymakers are clear that they’re ready for more stimulus.

Yet, Thursday is not seen as the time to deliver any new measures yet. After all, less than half the money allocated to the pandemic emergency purchase program has been spend. There won’t be need economic projections before December. By then, economists could finally factor in the results of US elections and Brexit negotiations. So December would be the better timing to gauge the stimulus needed next year. We might get some indication from President Christine Lagarde for the later move.

While Euro might be firm against Dollar, the picture in EUR/CHF is not looking too well for the near term. As long as 1.0749 resistance holds (which is close to 55 day EMA), we’d expect fall from 1.0877 to extend lower. Such decline is seen as the third leg of the pattern from 1.0915 and would target 1.0602 support and even below. EUR/CHF will need to overcome 1.0749 resistance to clear near term bearishness. 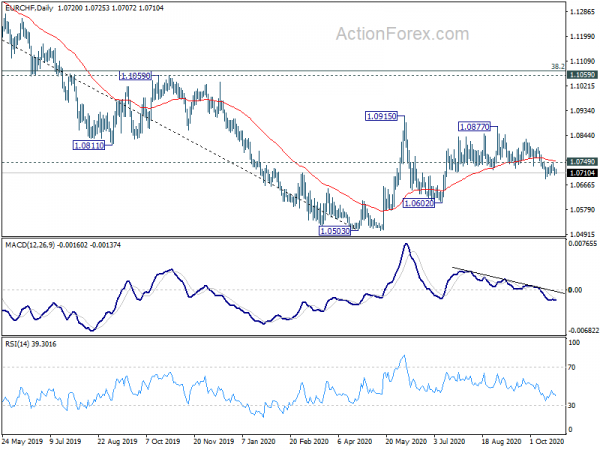 In addition the the three central bank meetings, US elections, Brexit and coronavirus pandemic would remain the focuses for the week. Attention will be paid to some key economic data too, in particular GDP from US, Eurozone and Canada. Here are some highlights for the week:

Intraday bias in USD/JPY remains neutral first and another fall is mildly in favor as long as 105.03 minor resistance holds. Below 104.34 will target 104.00 low first. Break will resume larger decline from 111.71. Nevertheless, sustained break of 105.03 support turned resistance will neutralize immediate near term bearishness. Intraday bias will be turned back to the upside for 106.10 resistance instead. 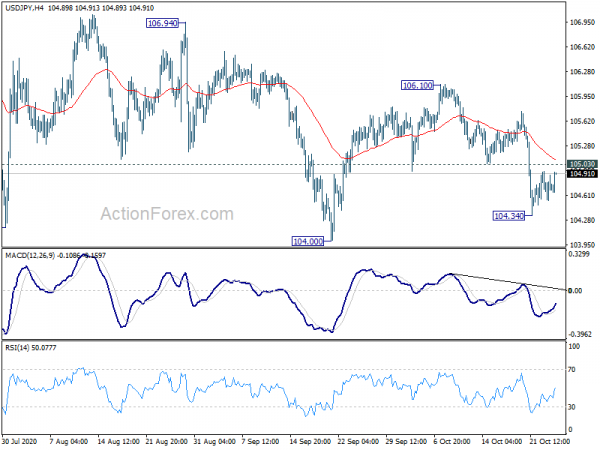 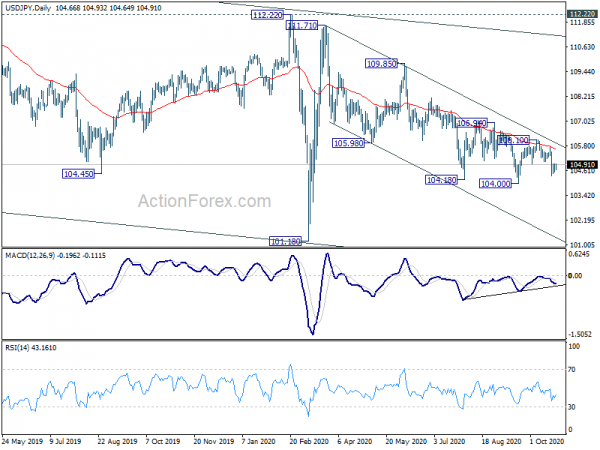