Movements in the forex markets are rather limited in European session, with some firmness seen in Dollar and Sterling. One focus is on the selloff in Canadian Dollar, which is dragged down by the steep decline in oil prices. Euro’s mild weakness is also worth a note, as partly weighed down by German sentiment data. Sterling’s rebound doesn’t warrant some sustainable moves yet. EU chief Brexit negotiator Michel Barnier will be in London today and stay until Wednesday for another rounds of talks. We’ll see if any results could be achieved this time.

Bundesbank: German economy recovery likely to continue in Q4, albeit a much slower pace

Bundesbank said economic output in Germany is “likely to have increased sharply” in Q3. In terms of quarterly GDP, the economy “could have made up for a little more than half of the drastic slump” in 1H. But it’s still around -5% below pre-crisis level at Q4 2019. From today’s perspective, “the economy recovery is likely to continue in the current quarter, albeit at a much slower pace”.

Industry “caught up remarkably” with mood improving. But That for service companies was “clouded a little”, affected by recent sharp rise in coronavirus infections and containment measures. The “slight recovery” on the labor market “has recently continued”. Consumer prices fell slightly and will fall significantly below previous year’s level “due to the lower oil prices and base effects”.

Germany Ifo Business Climate dropped slightly to 92.7 in October, down from 93.2, matched expectations. That’s the first decline after five consecutive rises. Current Assessment rose to 90.3, up from 89.2, beat expectation of 89.7. Expectations Index dropped to 95.0, down form 97.4, missed expectation of 96.0.

WTI dives on demand concerns, extending the correction back to 35.98 first

While the forex markets are relatively steady today, oil price is suffering steep decline in the early part of European session. Demand concern is seen as a reason for the sell-off. The US reported its highest number of new coronavirus infections in the two days through Saturday. Numbers in Europe are also making record runs. The resurgence comes at a rather bad time when the Northern Hemisphere is now entering into winter.

WTI crude oil’s decline is accelerating lower as seen in 4 hour MACD, with break of its trend line. The development now argues that price actions from 35.98 are a consolidation pattern completed with three waves to 41.62. That is, medium term correction from 43.50 is extending with another falling leg. Deeper fall would be seen, possibly through 35.98 low to 100% projection of 43.50 to 35.98 from 41.62 at 34.10. We’d expect strong support from there, which is close to 34.36 support to bring rebound. Meanwhile, near term downside risk will be erased if WTI could reclaim 40 handle. 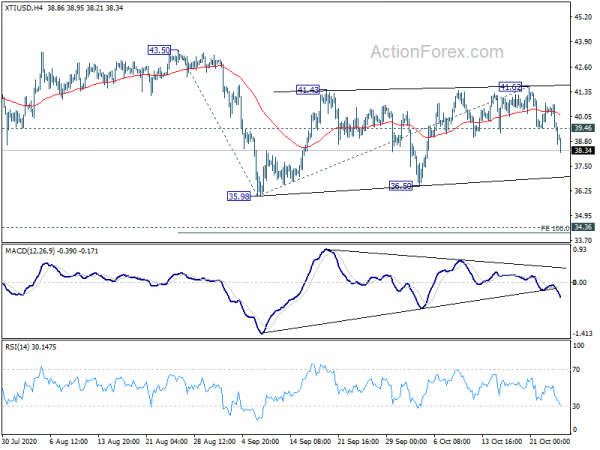 USD/CAD’s recovery from 1.3081 extends higher today but stays below 1.3259 resistance. Intraday bias remains neutral first. On the downside, break of 1.3081 will target a test on 1.2994 low. Break will resume the larger fall from 1.4667. However, break of 1.3259 resistance will extend the consolidation pattern from 1.2994 with another rising leg. Intraday bias will be turned back to the upside for 1.3418 instead. 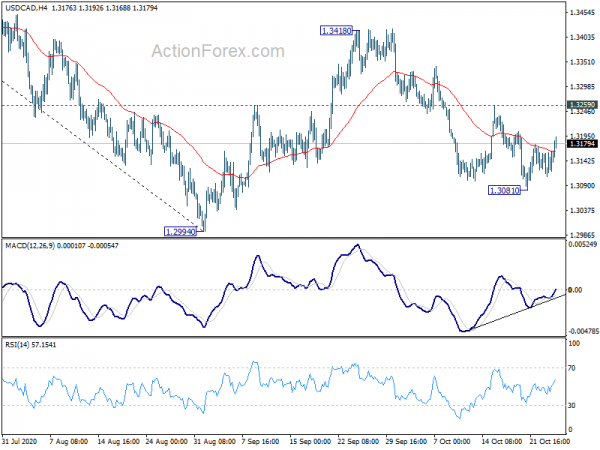 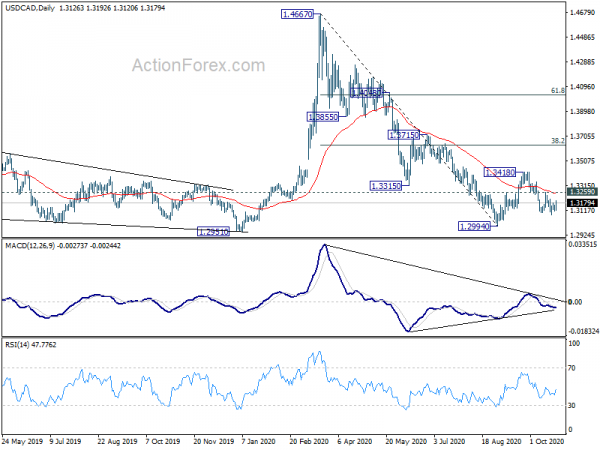