The forex markets are rather steady in Asian session today, after the sharp moves overnight. Asian stocks are rather immune from the mini crash in the US. Still, for the week, Yen and Dollar are currently the strongest ones on risk aversion. Canadian Dollar is the worst performing, suffering from additional drag by oil prices. Australian and New Zealand Dollar are not far behind. Yet, Euro is also among the weakest and “very serious” coronavirus situation would certainly drag the economy further into contraction, while ECB is widely expected to pave the way for further easing in December.

Technically, though, some key technical levels are still holding for now. 1.1688 support in EUR/USD, 1.2910 support in GBP/USD, 0.9165 resistance in USD/CHF, 0.7020 support in AUD/USD are still intact. Even EUR/JPY is still wresting with 122.37 support despite a brief breach. The commitment of Dollar and Yen bulls are still in test. Similarly, Gold is still holding on to 1872.75 support for now, even though it looks rather vulnerable. Firm break of 1872.85 will likely resume the corrective pattern from 2075.18 through 1848.39 low. That would confirm the come back in Dollar. 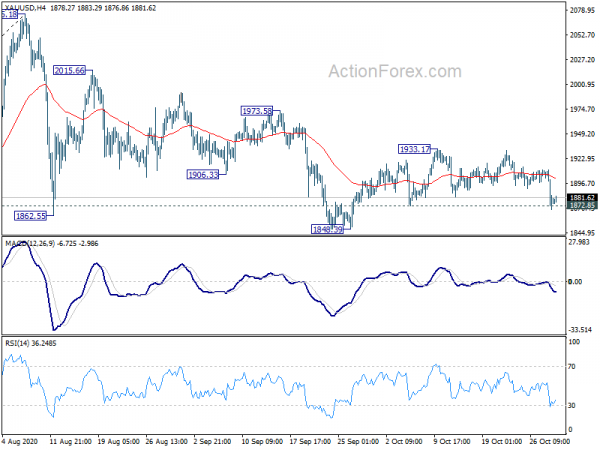 BoJ left monetary policy unchanged at widely expected. Under the yield curve control framework, short term policy interest rate is kept at -0.1%. BoJ will also continue to by JGBs, without upper limit” to keep 10-year yields at around 0%. Goushi Kataoka dissented in the 8-1 vote again, pushing for further strengthening of easing.

In the Outlook for Economic Activity and Prices report, BoJ said the economy is “likely to follow an improving trend with economic activity resuming and the impact of the novel coronavirus (COVID-19) waning gradually”. But, “the pace is expected to be only moderate while vigilance against COVID-19 continues.”

Year-on-year core CPI rate is “likely to be negative for the time being” mainly affected by COVID-19, the past decline in crude oil prices, and the “Go To Travel” campaign. Growth projections for fiscal 2020 was revised lower “mainly due to a delay in recovery in services demand”. But overall outlook is “extremely unclear”, with risks to both activity and prices “skewed to the downside”.

Alan Oster, NAB Group Chief Economist: “The Q3 survey conducted from mid-August to mid-September shows that conditions had improved notably from Q2 reflecting the opening up of the economy and generally better expectations about the virus. That said, despite the strong gains, both conditions and confidence remain very weak”.

“As the economy opens up and the recovery unfolds business confidence will be an important factor in determining how quickly things can get back to normal. While uncertainty will likely remain elevated at the global level, opening up state borders and at least reaching a COVID-normal domestically will be important for further gains in confidence” said Oster.

New Zealand ANZ Business Confidence rose to -15.7 in October, up from September’s -28.5. That’s slightly below October’s preliminary reading of -14.5. Confidence was best in construction at 12.5 and worst in agriculture at -50.0. Own Activity outlook turned positive to 4.7, up from -5.4. Activity was positive in all (including retail, manufacturing, construction and services), except agriculture at -4.0.

ANZ said: “There was a mix of ups and downs – it’s no longer true to say that business activity and sentiment indicators are bouncing strongly across the board. We do expect businesses to face some tougher times as the cushioning impact of the wage subsidy fades, but our best guess is that it’ll take at least a month or two to be felt. For now, the levels are encouragingly robust, on the whole.”

ECB to stand pat but pave way for Dec easing, a look at EUR/CAD

ECB monetary policy decision is a major focus for today. Coronavirus situation is “very serious” as described by European Commission President Ursula von der Leyen. Eurozone economy is destined to contract further in Q4 with tens of millions of people back in lockdowns. Heading reading is negative and would remain so for the near term. Yet, ECB is still unlikely to act “out of character” and deliver more monetary easing today. December remains the timing to do so as expected by most analysts. President Christine Lagarde, though, should clearly indicate that ECB is ready to use the PEPP as the main tool again in December, with extension and expansion.

Euro and Canadian Dollar are two of the weakest ones for the week. Euro is having a slight upper hand thanks the drag from oil prices. Technically, we’re still favoring the case that corrective pattern from 1.5978 has completed with three waves down to 1.5389. Break of 1.5738 resistance would bring retest of 1.5978/91 key resistance zone. Such development would help cushion part of Euro’s decline elsewhere. However, break of 1.5522 minor support would extend the correction with another falling leg, probably even through 1.5389. If happens, that would be an indication of a full across the board selloff in the common currency. We’ll see how it reacts after ECB. 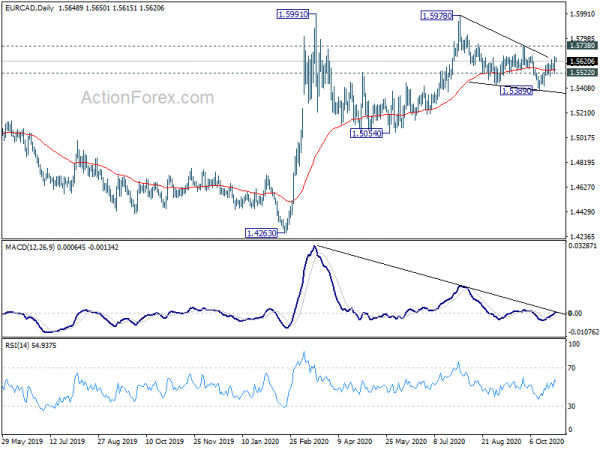 Germany will release unemployment data and CPI. Eurozone will release confidence indicators. UK will release M4 money supply and mortgage approvals. From the US, Q3 GDP will be a major focus while jobless claims and pending home sales will also be released. 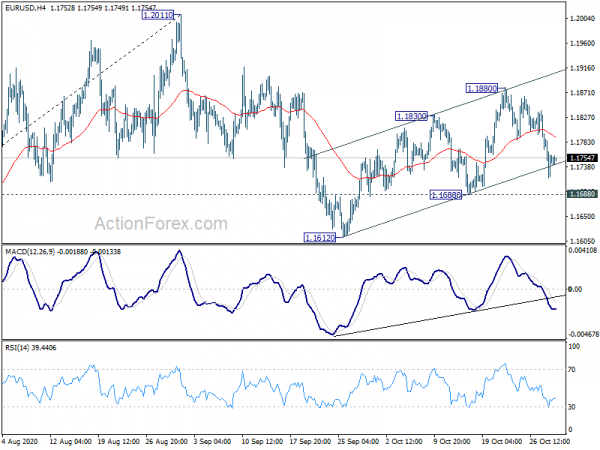 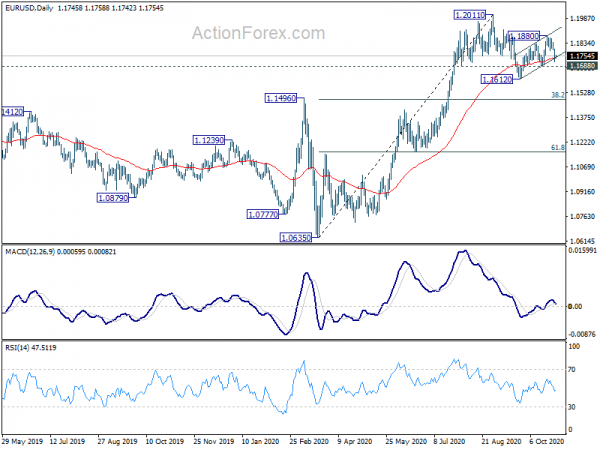