Dollar dropped notably overnight and stays weak in Asian session. Some Fed officials toned down the talk of tapering the asset purchase program, or any monetary stimulus removal. Sterling, on the other hand, is extending this week’s rally, after BoE talked down negative interest rates. The forex markets are mixed elsewhere though, awaiting the next move in overall risk sentiments. Oil prices are having a strong rally this week. But stocks appear to be taking a breather for now.

Technically, USD/JPY’s rejection by the falling channel resistance argues that Dollar’s rebound might have completed. Indeed, USD/CHF was also rejected by 0.8918 resistance. A focus will be firstly on 1.3702 resistance in GBP/USD and break will confirm resumption of larger up trend. 0.7819 resistance in AUD/USD is another level to watch, and break will also resume larger up trend. While EUR/USD might also take out 1.2244 minor resistance. It might not be able to break through 1.2348 for the near term, as upside is capped by weakness in crosses, like EUR/GBP and EUR/AUD. 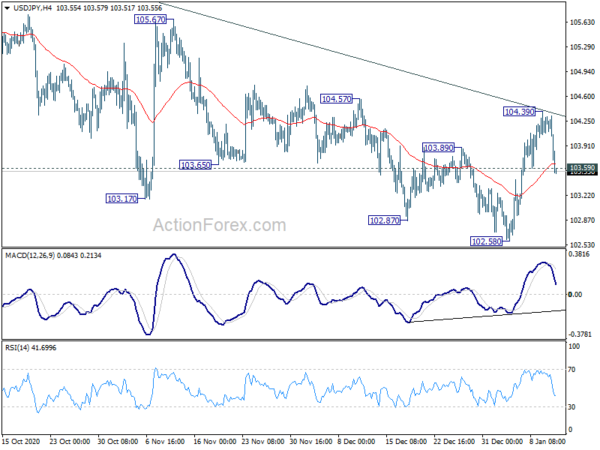 Fed Bullard: We’re not close to tapering yet

St. Louis Fed President James Bullard said it’s an “encouraging sign that the Treasury 10-2 spread is returning to more normal levels for an expansion.” Markets are ” hoping to see the end of the pandemic in 2021,” he added. “. They’re hoping to see good growth going forward, and because of that you’re seeing the yields normalize.”

But he also emphasized, “we want to get through the pandemic and sort of see where the dust settles, then we will be able to think about where to go with balance-sheet policy.” Fed would like to “replicate” the 2013 tapering process “when the time comes”. However, “we are not close to that yet.”

Fed Rosengren: Public health crisis will dissipate over the course of the year

Boston Fed President Eric Rosengren said in a speech that the public health crisis will likely “dissipate over the course of this year”. “The pandemic is likely to continue to be a problem for public health and the economy until widespread vaccinations take hold,” he added. “Nonetheless, with substantial fiscal and monetary support, I expect a robust recovery starting in the second half of this year.”

In response to a question, Rosengren said, “I expect it to be a little while before we’re even talking about tapering on our purchases of government and mortgage-backed securities.”

Fed Mester: Quite a while away from change in monetary policy stance

Cleveland Fed President Loretta Mester said she’s “comfortable” with monetary policy at the moment. “Asset purchases will be tapered once the Fed is ready to make changes, not reduced suddenly.” “It’s very premature to think we’re getting to the point to change our policy stance,” she added. “We’re quite a while away from a change in the policy stance.”

Separately, Kansas City Fed President Esther George said, “overall, the outlook is for monetary policy to remain accommodative for some time… It is too soon to speculate about the timing of any change in this stance.”

WTI crude oil accelerates higher this week and hits as high as 53.90 so far. The break of near term channel resistance is a sign of upside acceleration. That’s supported by the movement in daily MACD too. Production cut of OPEC+, as well as expectations for strong global economic growth in the second half is giving oil price some solid support. 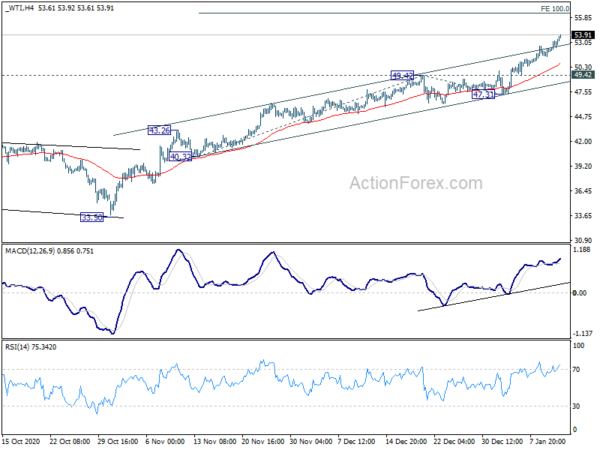 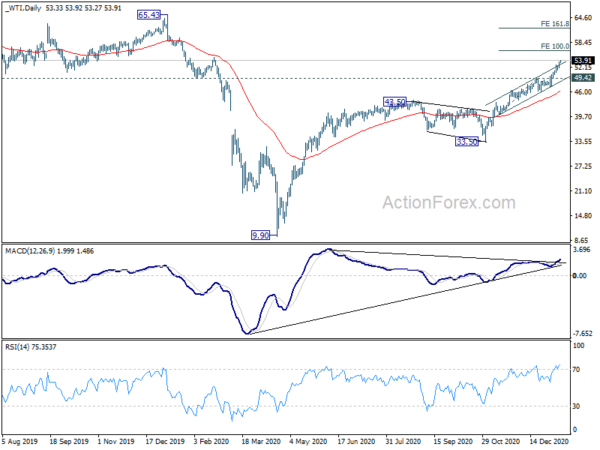 Japan M2 rose 9.2% yoy in December, matched expectations. Eurozone industrial production will be the main feature in European session. Germany will release WPI and Italy will release industrial output. Later in the day, US CPI and Fed’s Beige Book will be released. 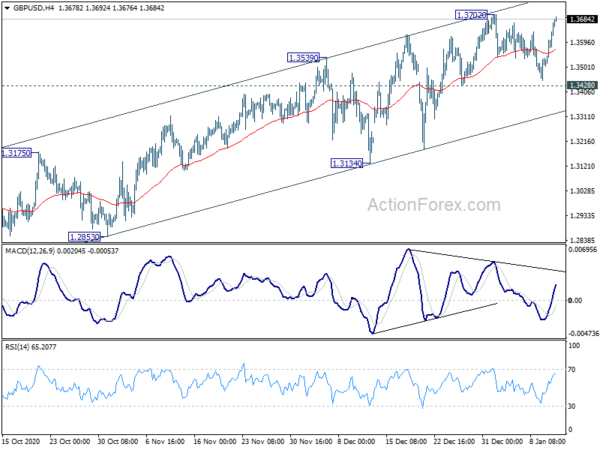 In the bigger picture, the break of 1.3514 structural resistance and sustained trading above 55 month EMA (now at 1.3328) should confirm medium term bottoming at 1.1409. Rise from there should now extend to 1.4376 resistance and above. This will remain the favored case as long as 1.2675 support holds. 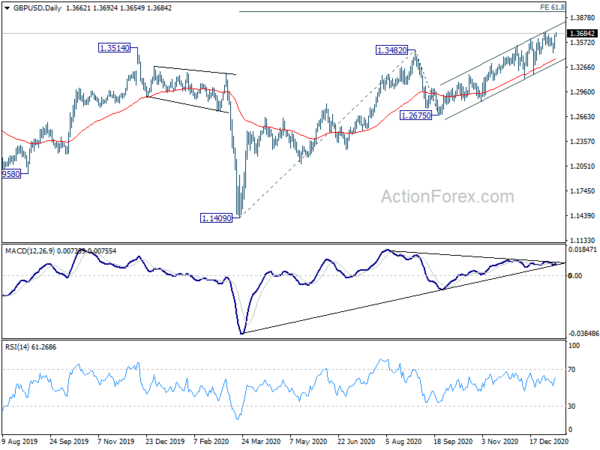