Euro is trying to reverse from initial dip today but buying is so far limited. Traders are getting cautious ahead of ECB President Mario Draghi’s speech in the Jackson Hole symposium. There were media reports last week that Draghi won’t delivery anything outside of the topic of the symposium, that is, "Fostering a Dynamic Global Economy". And it’s also clear that ECB will wait for more economic data, especially on inflation, and discuss policy change in the September meeting. Hence, some analysts argue that Euro could indeed be lifted if Draghi meets this expectation by saying nothing. But of course, what Fed chair Janet Yellen delivers is another big factor for both Dollar and Euro. Markets are generally not convinced that Fed is going to hike again in December. The greenback could be given a lift instead and drag the Euro down if Yellen shows no concern over recent tame inflation reading.

In the global stock markets, European indices are trading lower with both DAX and CAC down more than -0.3%. FTSE is hovering around break even. US futures also point to flat open. Risk aversion in a dominant theme this month, on White House turmoil, Korea tension, terrorist attacks. Yen and Swiss Franc are the main beneficiaries while Sterling suffers most. GBP/CHF’s sharp fall from this month’s high from 1.2852 to as low as 1.2346 is a clear example. Risk will stay on the downside as long as 1.2644 resistance holds, with focus on 1.2339. As price actions from 1.1635 are clearly corrective looking, break of 1.2239 will very likely bring deeper fall to retest last year’s low at 1.1635. 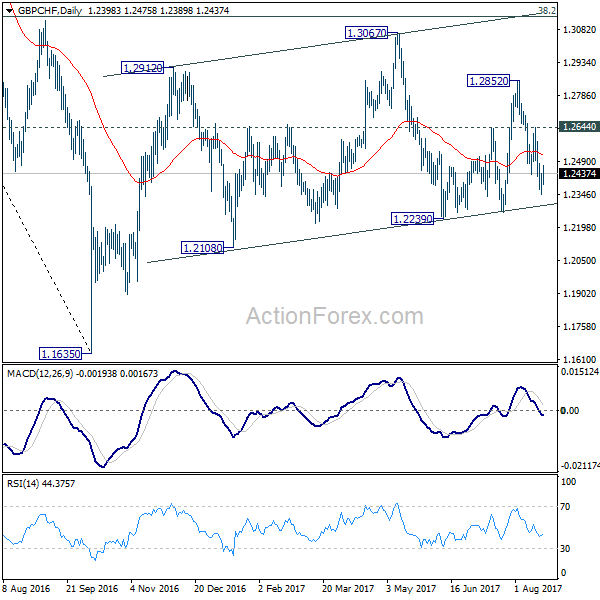 Talking about weakness in Sterling, the upcoming round of Brexit negotiation with EU on August 29 will be a focus to watch later. Last week, the UK government, facing criticisms of its lacking preparation, released the policy papers on future customs arrangements, and Northern Ireland and the border with Ireland. The UK’s positions, in particular the customs arrangements, triggered criticisms and are expected to delay the completion of the first phase negotiation, limiting the time for the second phase (trade issues). British pound has remained under pressure recently, with GBPUSD hovering around a one-month low and EURGBP firming around the highest levels in 10 months. More in UK’s Unrealistic Customs Proposal Might Delay Brexit Negotiations.

In US, there are some findings from a survey by the National Association for Business Economics, polled 184 economists from July 18 to August 2. Only 17% expected Fed Chair Janet Yellen would be offered a second term when the current four-year term ends next February. 67% expected that Yellen will be replaced while 16% don’t know. Among the contenders, 49% expect White House economic adviser Gary Cohn would be picked for the top Fed job. That’s a wide margin from former Fed Governor Kevin Warsh’s 9% as second. However, it should be noted that the survey was done way before US President Donald Trump’s controversial remarks on the Charlottesville clash between Neo Nazi and counter protestors. Cohn was rumored to quite White House last week but denied.

The same survey showed that the respondents are "quite pessimistic about prospects for ‘meaningful, revenue-neutral tax reform’ in the near term." The survey showed only 10% chance of such legislation this year and 15% chance in 2018. Meanwhile, over 50% said Trump’s tax reform will eventually add less than 1% to real GDP growth over the next decade. A third said that impact would be between 1-2%.

Regarding Fed’s unwinding of balance sheet, 41% expect 10 year yield to rise by just 0.5% or less. 25% expect the jump in yield to be 0.75%-1.00%. NABE President Stuart Mackintosh noted that "the overall view of the panel is that the likely interest-rate impact of the Federal Reserve’s balance sheet normalization is fairly benign."

EUR/USD recovers mildly today but stays below 1.1846 minor resistance. Intraday bias in EUR/USD remains neutral as consolidative pattern from 1.1908 might extend. In case of another fall, downside should be contained by 38.2% retracement of 1.1119 to 1.1908 at 1.1606 to bring up trend resumption. Break f 1.1846 minor resistance will argue that larger rise from 1.0339 is resuming for 1.2042 long term support turned resistance next. 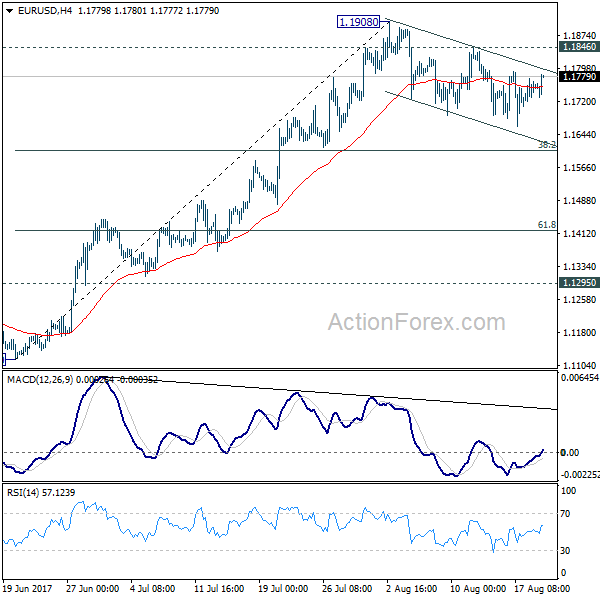 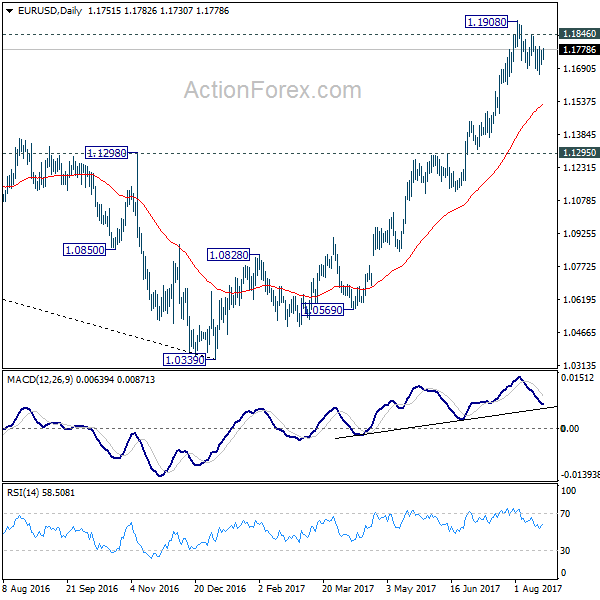