The markets continues to trade in non-committal way as traders await Fed’s comments on treasury yields. Swiss Franc is currently the strongest one for the week, thanks to yesterday’s rally. But there is no follow through buying so far. Canadian Dollar is following closely as the second strongest. Euro, on the other hand, is the worst performing one, followed by Aussie and then Sterling. But, except against Swiss and Loonie, Euro, Aussie and Pound are bounded inside last week’s range.

Technically, despite yesterday’s retreat, USD/JPY, EUR/JPY and GBP/JPY are holding above 108.33, 129.02 and 150.54 minor support respectively. Further rise will remain in favor in these Yen crosses. As for Dollar, it’s holding in range against Euro, Sterling, Aussie and Swiss too. Gold will be used as a tool to double-confirm Dollar’s move. Firm break of 1740.32 resistance should confirm short term bottoming and bring stronger rebound. Meanwhile, rejection by 1740.32 will likely extend the larger fall through 1676.65 temporary low. 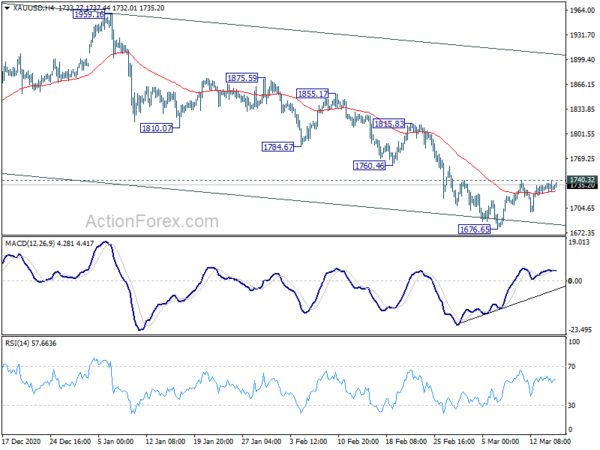 Japan’s export dropped -4.5% yoy to JPY 6038B in February, much worse than expectation of -0.5% yoy. That’s also the first decline in exports in three months. Exports to China slowed sharply to 3.4% yoy, partly due to lunar new year holidays. Exports to US dropped -14.0% yoy. dragged down by automobiles, airplane parts and motors.

Imports rose 11.8% yoy to JPY 5821B, slightly below expectation of 11.9% yoy. That’s, nonetheless, the first annual increase in exports in 22 months due to pickup in domestic demand, restocking of inventory and rises in crude oil and resources prices. Trade surplus came in at JPY 217B.

ECB Governing Council member Peter Kazimir said the rise in Eurozone bond yields this year wasn’t dramatic for now”. The decision last week to significantly increase asset purchase in Q2 was “a reaction to the spillover of the market move triggered by the approval of the U.S. fiscal package.”

“My concern is that, compared with the enormous U.S. fiscal impulse, the effects of the European one will kick in with a major delay — we’re talking months and years,” Kazimir said. “The joint fiscal reaction is lagging behind and needs to pick up its pace to support the recovery.”

Also, Kazimir didn’t expect the need to keep downward pressure on bond yields forever. “With a gradual economic revival, and with generally improving situation, the market rates will naturally react,” he said. “What’s important is that such an increase reflects economic fundamentals and that there aren’t some speculative, unwarranted moves.”

Separately, Executive Board member France Elderson said in a Twitter Q&A: “Inflation increased sharply in January and February, and is likely to go up further in the coming months… This is mainly due to transitory factors, which we look through. Underlying inflation remains subdued owing to weak demand and economic slack.”

S&P affirmed the “AA+/A-1+” sovereign credit ratings on the US. Outlook remained “stable”, as negative and positive rating factors for the U.S. will be balanced over the next three years”.

In the upside scenario, rating could be raised over the next two years if “effective and proactive public policymaking contributes to favorable economic outcomes. Sustained economic growth, along with measures to address long-term fiscal challenges, could slow the recently high annual increases in the general government’s net debt as a share of GDP.

Conversely, in the downside scenario, “unexpectedly negative political developments in the next two years that reduce the resilience of American institutions, the economy, and the effectiveness of long-term policymaking or jeopardize the dollar’s status as the world’s leading reserve currency could lead to a negative rating action.”

Fed to upgrade growth forecasts, eyes on reactions to yields, some previews

Fed is generally expected to keep monetary policy unchanged today. Fed funds rate will be kept at 0-0.25%. Asset purchase will also remain at USD 120B per month pace. Developments since last meeting were positive, with upbeat economic data released recently, passage of USD 1.9T of fiscal stimulus, and progress in vaccination. Fed would likely upgrade GDP forecast for the year, but emphasize it’s premature to even consider stimulus withdrawal.

A much talked about topic is the surge in treasury yields. Fed chair Jerome Powell could just reiterate the view that rising yields were a result of better economic developments and stronger market confidence. That might give treasury yields a note for another powerful rise. Or, yields could be knocked down if there is any hint on the possibility of some measures like operation twist to curb yields. The reactions in the markets could be very volatile.

Eurozone CPI final is the main feature in European session. Canada will release CPI later in the day. US will release housing starts and building permits before Fed rate decision.

Intraday bias in USD/JPY remains neutral for some consolidations. Further rise is expected as long as 108.33 minor support holds. On the upside, break of 109.35 will resume the rally from 102.58 to long term channel resistance at 110.02 next. Decisive break there will carry larger implications. However, on the downside, break of 108.33 will indicate short term topping. Intraday bias will be turned to the downside for correction. 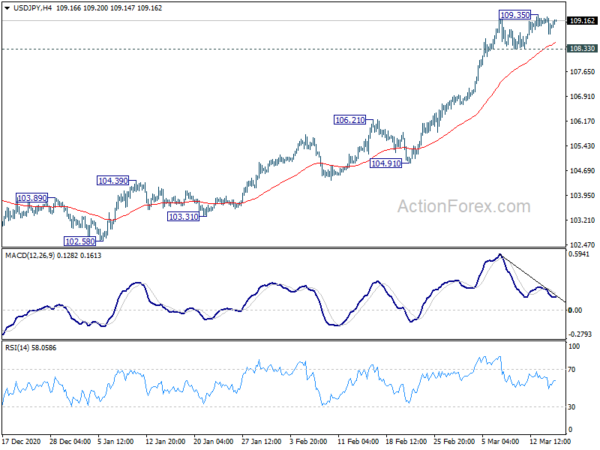 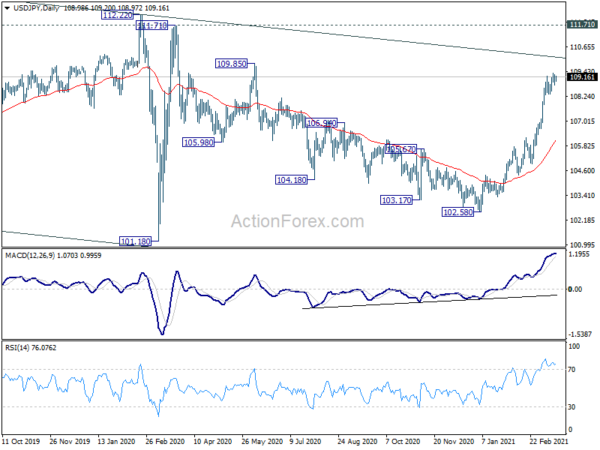