Markets are generally steady in Asian session today, with mild recovery seen in Nikkei. Though, movements in other markets are rather subdued. Commodity currencies recover in general while Yen, Swiss Franc and Dollar are the weaker ones. However, for the week, Dollar and Yen remain the strongest one while New Zealand and Australian Dollar are the worst performing so far. Focus will turn to SNB rate decision and US jobless claims.

Technically, we’d continue to pay attention to Dollar pairs. In particular, USD/CHF is holding below 0.9374 resistance for now. Firm break there will resume larger rally from 0.8756. USD/JPY recovers ahead of 108.33 minor support and focus is back on 109.35 temporary top. Firm break there will also resume the larger rise from 102.58.

Chicago Fed President Charles Evans said he expected economy to growth 6.5% this year. Unemployment rate is expected to fall to 4.5% this year and below 4% next. Inflation would rise temporarily, but then fall back.

He noted there’s a lot of reason to be optimism but there are also concerns, like the scarring effects on large part of workforce due to the pandemic.

On monetary policy, “we’re looking for actual improvement in the economy and inflation to get back up to our dual mandate objectives of maximum inclusive employment and 2% inflation on average,” he added, before removing accommodation.

Fed Williams: I don’t know when we will take the next policy action

New York Fed President John Williams said, “I see the U.S. economy recovering really nicely over the next couple of years.” But, “I don’t see inflationary pressures really building during that time.” Indeed, it would be a while before US could reach a sustained inflation rate of 2%, considering the high rates of unemployment, and other global disinflationary forces.

On monetary policy, Williams said, “I don’t know when we will take the next policy action because it will be driven by what happens in the economy.

Fed Daly: We wont’ preemptively take the punchbowl away from the economy

San Francisco Fed President Mary Daly echoed the rhetorics of her FOMC colleagues, and said, “we won’t be preemptively taking the punchbowl away from the economy”.

Instead, “we want to discipline ourselves here and not get overly joyous that the unemployment rate is coming down, while so many other measures of labor-market activity remain well below pre-pandemic levels, still needing to recover,” she deed.

“So what you’re going to see in our framework is a good, healthy, and I think appropriate, dose of patience.”

BoE Haldane: When recovery comes, it will come fast and large

Asked by in ITV’s Robert Peston Show on whether the UK will have the fastest recovery for a century, BoE Chief Economist Andy Haldane said, “yes, as it was the sharpest recession to begin with”.

About GBP 150B has been saved over the past year, mostly by higher income house holds. “If some of those savings do get spent, even a small amount of them, we’re talking abut a pretty rip roaring recovery.”

“When it comes, it will come fast, and it will be large.”

Later in the day, US will release jobless claims and Q4 GDP final.

USD/JPY is staying in tight range of 108.33/109.35 and intraday bias remains neutral first. Outlook is unchanged. With 108.33 minor support intact, the consolidation should be relatively brief. On the upside, break of 109.35 will resume the larger rise from 102.58 long term channel resistance at 110.02 next. However, on the downside, break of 108.33 will indicate short term topping. Intraday bias will be turned to the downside for correction. 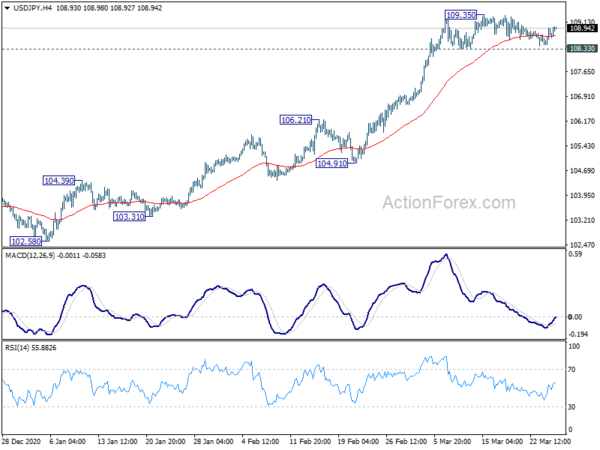 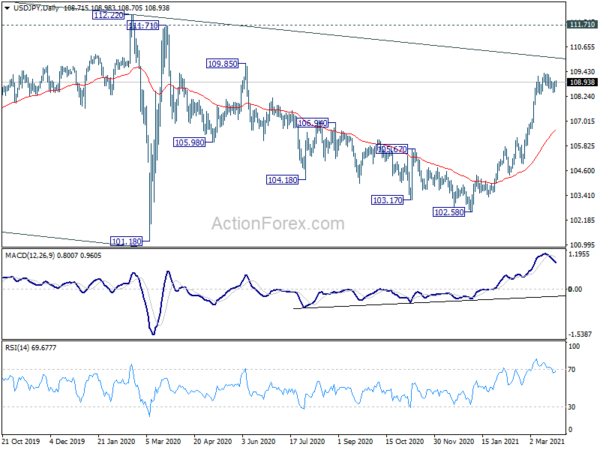