Yen bounces broadly in Asian session session today, after Japan reported solid trade data. Sterling is currently following as second strongest, then Aussie. On the other hand, Euro weakens in general, dragging down the Swiss Franc too. The developments came as Sterling is reversing recent decline against other European majors. Dollar and Canadian are both mixed at the time of writing.

Technically, EUR/GBP’s break of 0.8638 minor support argues that the rebound from 0.8470 has completed much earlier than expected. Deeper fall could be seen back to retest 0.8470. EUR/JPY could now be eyeing 129.56 support. Break will extend the consolidation pattern from 130.65 with another fall towards 128.28 support. Selloff in Euro crosses could in turn keep EUR/USD capped by 1.2 handle.

Bitcoin was in heavy selloff during the weekend, together with other crypto currencies. There’s unconfirmed news that the US Treasury is going to tighten up regulations to crackdown money laundering with digital assets. The selloff was also seen as hangover of Coinbase listing on NASDAQ last week. Some believed it’s related to the blackout in China’s Xinjiang region, which caused almost half of Bitcoin network to go offline in 48 hours.

Technically, the decline wasn’t much a surprise to us. We have been seen price actions from 20283 as developing in to a five-wave terminal triangle. The break through 60726 to 64828 was a bit stronger than expected. But that’s kept by upper trend line of the triangle nonetheless.

Immediate focus is now on 55555 support, which is close to lower trend line of the triangle. Firm break there should confirm the start of a larger correction, to the whole up trend from 4000 (Mar 2020). The eventual depth of the correction would depend on the strength of the interim rebound. But we’d tentatively put 38.2% retracement of 4000 to 64828 at 41591 as target. That’s also close enough to top of prior range of 20283/41964. 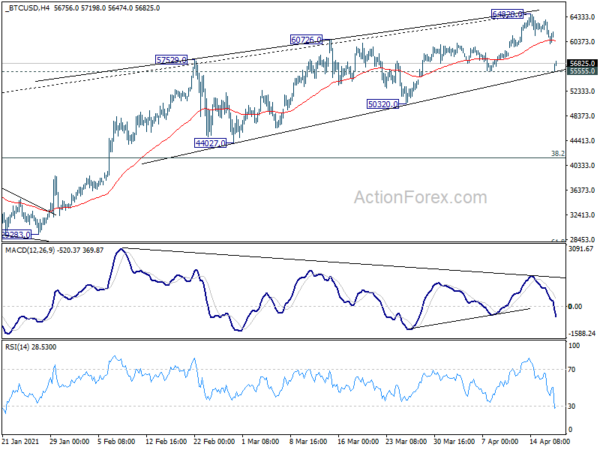 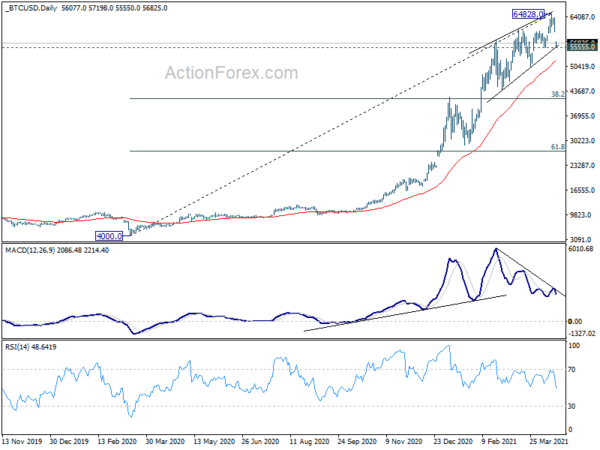 BoC is generally expected to be the first major central to taper asset purchases this week, from the currently CAD 5B per week to CAD 3B per week. As for interest rate, however, it will likely reiterate that overnight rate will remain at the effective lower bound until into 2023. Additionally, new economic forecasts in the MPR will be closely watched.

ECB will also meet this week, but it’s unlikely to provide any new information, given that it has just started to increase the pace of asset purchases significantly this month. Though, the overall tone of President Christine Lagarde could be slightly more upbeat, as Eurozone seems to be weathering the third wave of pandemic rather well. Also to be featured, RBA minutes will likely be a non-event.

On the data front, it’s a big week for the UK, with employment, CPI and PPI, retail sales, and PMIs featured. Japan, Canada and New Zealand will also release CPI. Eurozone will release PMIs too. The calendar will get busier towards the end of the week. Here are some highlights: 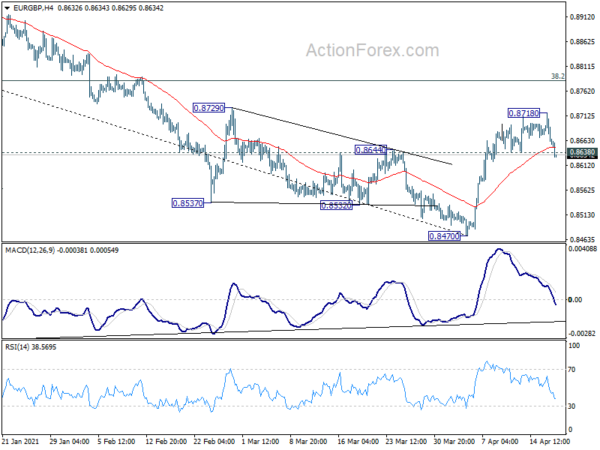 In the bigger picture, we’re seeing the price actions from 0.9499 as developing into a corrective pattern. That is, up trend from 0.6935 (2015 low) would resume at a later stage. This will remain the favored case as long as 0.8276 support holds. However, firm break of 0.8276 support will suggest that rise from 0.6935 has completed and turn medium term outlook bearish. 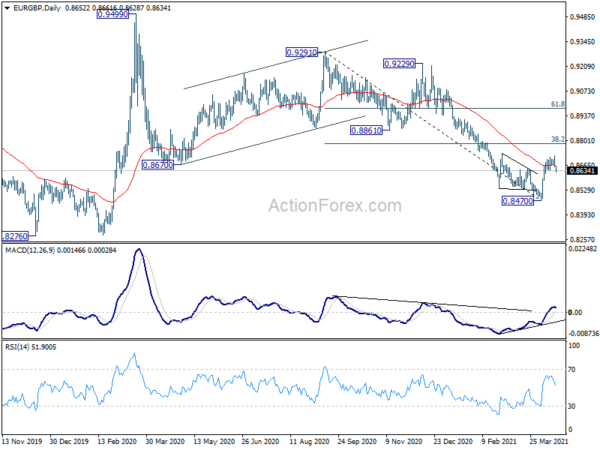