Markets Back in Risk on Mode, Dollar Softens Mildly

Markets seem to be back in mild risk on mode in Europe, shrugging off the selloff in Asia. US futures also point to higher open, as the record run could resume this week. The currency markets are relatively mixed. Yen is stabilizing into US session after earlier selloff. Dollar is also weakening mildly for the moment. For now, Swiss Franc is the weakest followed by Yen. Sterling is the strongest followed by Aussie.

Technically, Swiss Franc could be a focus this week, in particular against European majors. EUR/CHF recovered notably ahead of 1.0954 support. While it’s still far away, break of 1.1073 resistance will indicate completion of consolidation pattern from 1.1149 and bring retest of this high. Similar, GBP/CHF also recovered ahead of 38.2% retracement of 1.1683 to 1.3070. Break of 1.2814 resistance will also indicate completion of the correction from 1.3070 and bring retest of this high. 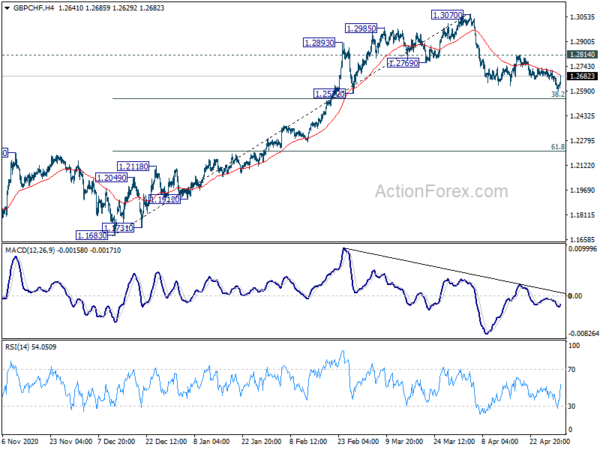 ECB President Luis de Guindos said in an interview that the current situation in Eurozone’s economy is “bittersweet”. Q1 was weaker than expected by vaccination is gaining momentum in Europe, which will have a “major impact on the economy”. “We expect the second half of the year to be very positive, even if there is still uncertainty.”

On the matter of tapering, “I don’t have any preconceived notions in this respect,” he added. “The way in which the economy develops will be the deciding factor.” If Europe could meet that target of vaccinating 70% of adult population by summer, and economy starts to pick up speed, “we may also start to think about phasing out the emergency mode on the monetary policy side”.

But he emphasized he was only “referring to a cautious exit from the emergency programme”, but not about raising interest rates. “it should be managed with a great deal of prudence.”

Eurozone PMI Manufacturing was finalized at 62.9 in April, up from March’s 62.5, highest since record began in 1997. Markit noted considerable increases in out and new orders. But supply delivery times lengthened at unsurpassed rate, helping to driver rapid price increases.

Chris Williamson, Chief Business Economist at IHS Markit said: “The consequence of demand running ahead of supply is higher prices being charged by manufacturers, which are now also rising at the fastest rate ever recorded by the survey. “The big uncertainty is how long these upward price pressures will persist for, and the extent to which these higher charges for goods and services will feed-though to consumers.”

“Encouragement comes from the sharp increase in employment and investment in machinery and equipment signalled by the survey, which suggests firms are scaling up capacity to meet resurgent demand. This should help bring supply and demand more into line, taking some pressure off prices. But this will inevitably take time.”

Australia AiG Performance of Manufacturing Index rose 1.8 pts to 61.7 in April. that’s the seventh straight month of rise, and the strongest reading since March 2018. All six manufacturing sectors expanded, as did all seven activity indicators.

Ai Group Chief Executive Innes Willox said: “Australia’s manufacturing industry showed no signs of slowing in the month following the end of the JobKeeper wage subsidy…. There was a large lift in manufacturing production, sales and exports and employment continued to grow solidly – although not at the very rapid pace seen in March. To date the sector as a whole has not been adversely affected by the stronger Australian dollar although a number of businesses are keeping a close eye on where the currency goes from here.” 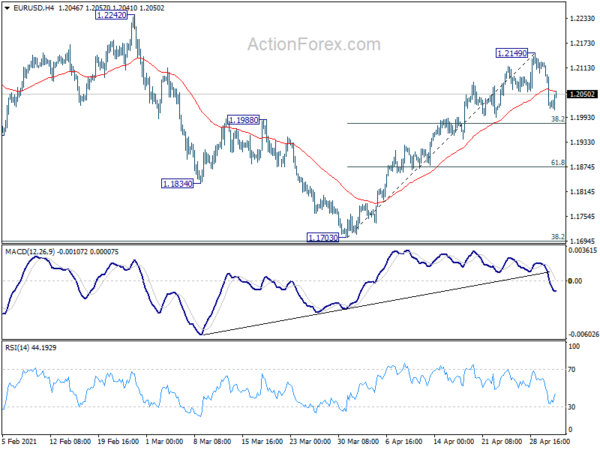 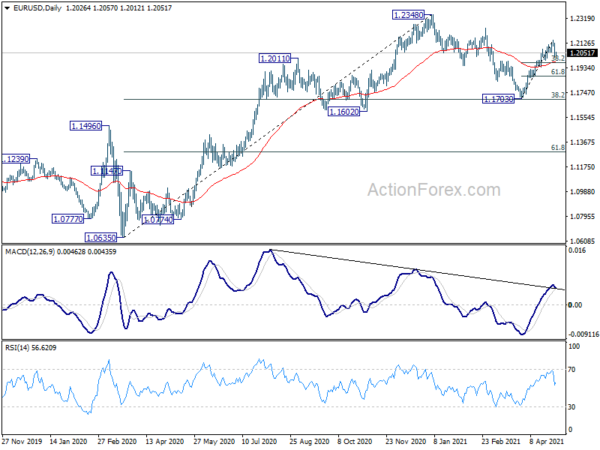