Dollar Recovers But Not Turning Around Yet, Sterling Firm

Dollar recovers broadly today even though Fed officials sung a chorus emphasizing patience in monetary policy. Canadian Dollar is also firm with help from rebound in oil prices. On the other hand, Australian Dollar is trading generally lower together with Kiwi. Nevertheless, for the week so far, Sterling remains the strongest one, as UK GDP data is awaited.

Technically, it’s too early to say that Dollar is turning around the corner. We’d at least want to see break of 4 hour 55 EMA in EUR/USD at 1.2091 and 4 hour 55 EMA in USD/CHF at 0.9076, to give us some confidence on the sustainability of the rebound. Meanwhile, Canadian Dollar continues to outperform other commodity currencies. Break of 0.9447 temporary low will resume the fall from 0.9991 to 0.9247 cluster support. 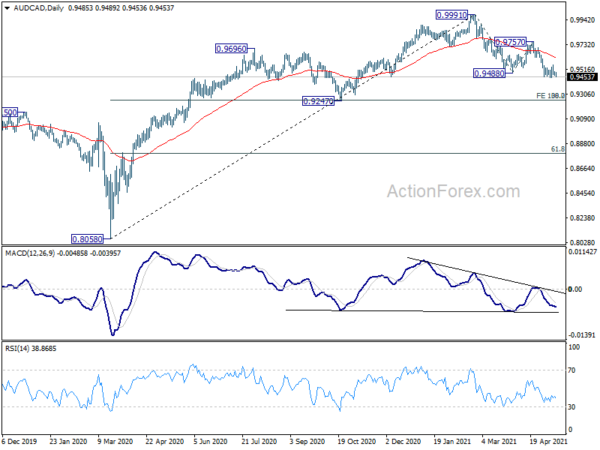 NASDAQ could build a base after late rebound

While US stocks tumbled sharply initially overnight, the late rebound in NASDAQ was rather impressive. It drew support from just above 61.8% retracement of 12397.05 to 14211.57 at 13090.19 and rebounded, closing down just -0.09%. There is prospect of building a base at current levels. 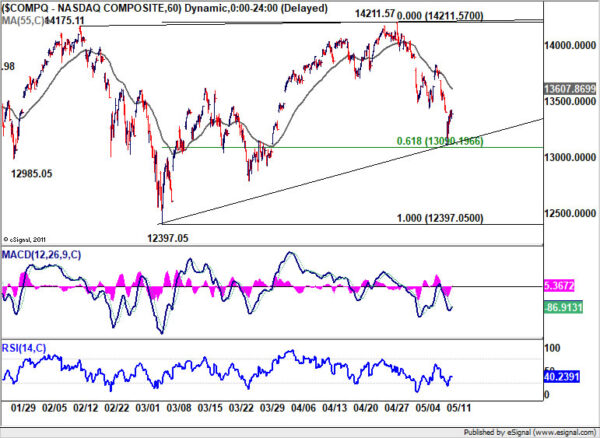 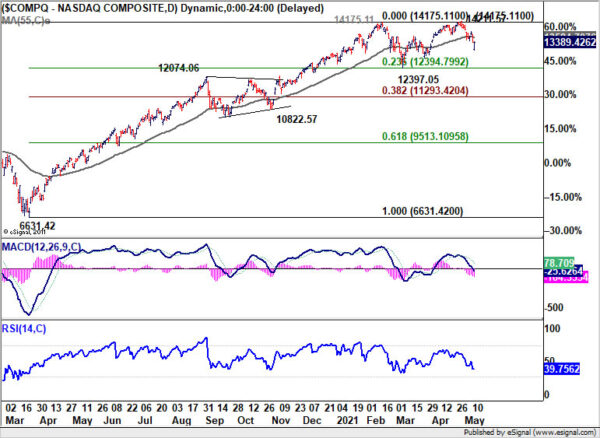 Fed Harker: Recovery is still a work in progress

Philadelphia Fed President Patrick Harker said in a speech, “we’ll keep the federal funds rate very low and continue making more than $100 billion in monthly Treasury bond and mortgage-backed securities purchases. While the economic situation is improving, recovery is still a work in progress, and there’s no reason to withdraw support yet.

“With so much fiscal support and monetary accommodation, there is some upside risk to increased inflation, and we will continue to monitor that closely. But for now, I’m forecasting 2.3 percent headline inflation for 2021 with core inflation at 2 percent,” he added.

Later he added, inflation is “not only a number”, but also “the rate of change”. He said 3% is probably the maximum inflation he would like to see. But he’d be more comfortable with inflation at around 2.5%. “We don’t want inflation to run out of control,” he said.

Fed Governor Lael Brainard said that the weak April NFP report “reminds us that realized outcomes can diverge from forward projections and underscores the value of patience”. Also, “to the extent that supply chain congestion and other reopening frictions are transitory, they are unlikely to generate persistently higher inflation on their own.”

“Remaining patient through the transitory surge associated with reopening will help ensure that the underlying economic momentum that will be needed to reach our goals as some current tailwinds shift to headwinds is not curtailed by a premature tightening of financial conditions,” she said.

“I don’t think you really want to change policy while you’re still in the pandemic tunnel. Even though you can sort of see the end of the tunnel, we’re not there yet, and we’ve got to push hard till we get all the way to the end,” he said.

ECB Knot expects more than 4% growth over the full year

ECB Governing Council member Klaas Knot said yesterday, “we can take comfort that the euro area in the coming months will take the exact same trajectory, services will also pick up, we expect more than 4% growth over the full year.” Further, he added, “I would argue that there is still significant upside risk actually, and that has to do with pent-up demand.”

“Traditionally we have been very conservative within the ECB, assuming in our baseline projections that the savings rate would just return to its pre-corona level, that there would be no pent-up demand taking place,” Knot said. “I personally think that’s a bit of an overly conservative assumption.”

Nevertheless, inflation is still too low and ECB would need to provide abundant support even if the PEPP purchases end in 2022. “The only thing we are talking about is rotation from emergency support to other forms of unconventional support,” he said, “we will still have the old asset purchase programme, we will still have the negative interest rates in place and most importantly, the targeted longer-term refinancing operations to the banks.”

UK GDP, productions and trade balance are the main focus in European session. Germany will release CPI final while Eurozone will release industrial production. Later in the day, US CPI will take center stage.

A temporary top is formed at 1.4165 with 4 hour MACD crossed below signal line. Intraday bias in GBP/USD is turned neutral for some consolidations. But further rise is expected as long as 1.4008 resistance turned support holds. on the upside, break of 1.4165 will resume the rally from 1.3668 to retest 1.4240 high. Firm break there will resume larger up trend from 1.1409 low for 1.4376 long term resistance next. however, firm break of 1.4008 will delay the bullish case and extend the corrective pattern from 1.4240 with another falling leg. 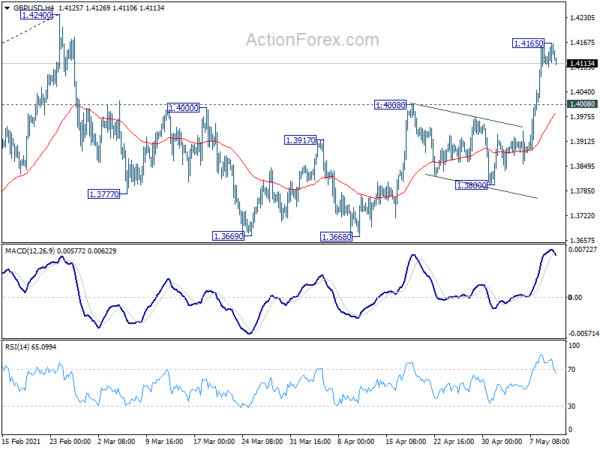 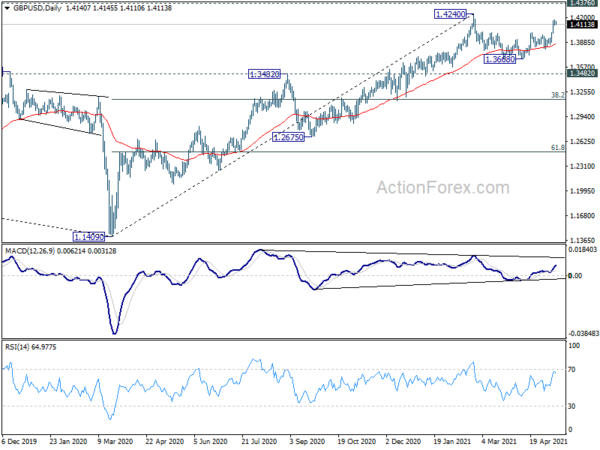