Dollar rose broadly overnight, following solid job and services data, and remains firm in Asian session. Nevertheless, the real test lies in today’s non-farm payroll report. As of now, Yen is the second strongest for the week, following the green back. Canadian Dollar is the third strongest, and will face the test of its own job data too. Kiwi and Aussie are the worst performing, together with Sterling.

Technically, AUD/USD’s break of 0.7673 support suggests that the pattern from 0.8006 is now in its third leg, targeting 0.7530 support again. To seal the case of near term Dollar reversal, we should ideally see decisive break of 1.4090 support and GBP/USD, as well as 0.9046 resistance in USD/CHF today. Gold’s break of 1882.07 support overnight should confirm short term topping at 1916.06. However, a strong and quick rebound above this support turned resistance could be a warning for the Dollar bulls. 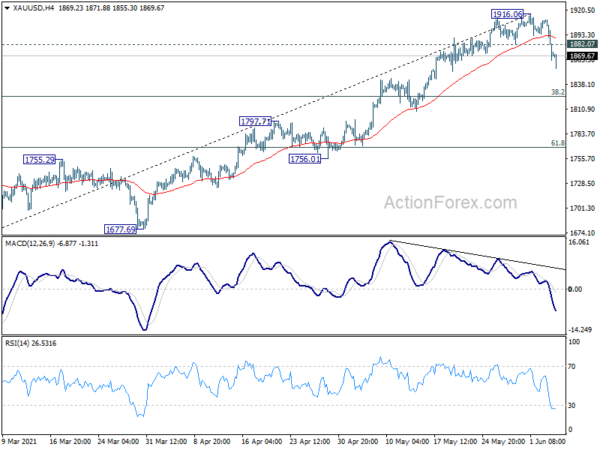 US non-farm payroll employment is once again a major focus today. Markets are expecting 621k job growth in May. Unemployment rate is expected to drop from 6.1% to 5.9%. Average hourly earnings are expected to grow 0.2% mom.

Looking at related data, ADP private jobs grew a massive 978k in the month. More importantly, growth was quite evenly distribution among small, mid, and large companies. Four-week moving average of initial jobless claims dropped sharply from 612k to 428k. However, ISM manufacturing employment dropped notably from 55.1 to 50.9. ISM services employment also dropped from 58.8 to 55.3. There is still room for disappointment considering the relatively high expectations on the NFP numbers.

Dollar staged a strong and broad based rebound overnight. The Dollar index look set to start the third leg of the consolidation pattern from 89.20. Yet, we’d need to see firm break of 90.90 resistance, as well as sustained trading above 55 day EMA to confirm. In that case, stronger rise should follow towards 93.43 resistance in the next few months. However, failure to do so would keep near term outlook bearish for at least another take on 89.20 low. 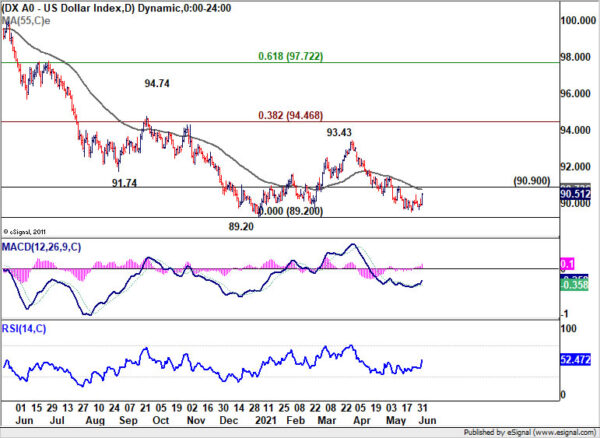 Fed Williams: Not is not the time to take any action on tapering

New York Fed President John Williams said, “we’re still quite a ways off from maintaining the substantial further progress we’re really looking for in terms of adjustments to our asset purchase program.” And, “I just don’t think the time is now to take any action.”

Williams was “very positive” about the economic look. “I expect the economy will adapt to the rapid recovery and we’re going to see very good jobs growth and expect to see really strong GDP growth this year and seeing good growth next year,” he said.

Dallas Fed President Robert Kaplan reiterated that “it would be wiser sooner rather than later to begin discussions about adjusting our purchases with a view to taking the foot off the accelerator gently, gradually, so we can avoid having to depress the brake down the road.”

“At this stage, as it’s clear we are weathering the pandemic and making progress, I don’t think the housing market needs the level of support that the Fed is currently providing,” he added. “I would love to see sooner rather than later a discussion of the efficacy, for example, of those mortgage purchases.”

Japan household spending rose 13.0% yoy in April, above expectation of 8.9% yoy. UK PMI construction and Eurozone retail sales will be release in European session. Later in the day, employment data from US and Canada are the major focuses. US will also release factor orders while Canada will release Ivey PMI. 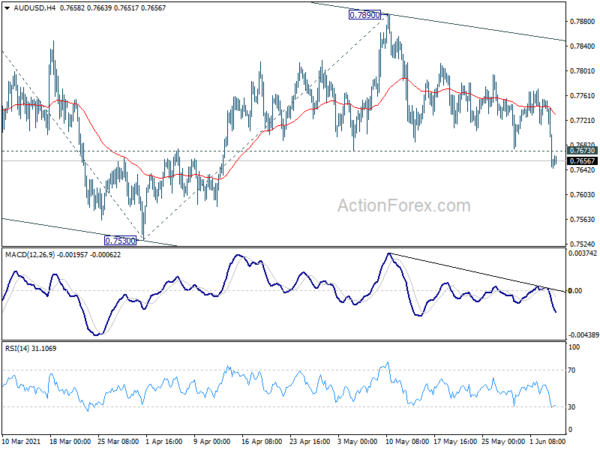 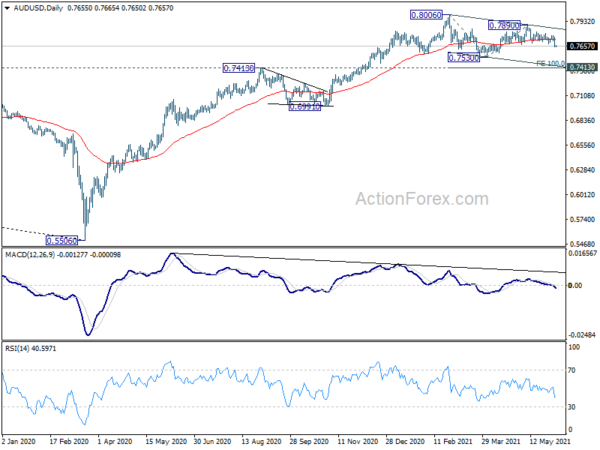