Dollar suffered another round of selloff overnight and stays soft. Mild risk aversion in Asia is not helping the greenback much. But commodity currencies are following closely, in particular Aussie and Kiwi, as the next worst performers for the week. European majors look set to be the winners of the week, as led by Sterling. Nevertheless, a bunch of GDP data from Eurozone and Canada could change the picture before the weekend.

Technically, Euro’s decline against Sterling appears to be low as seen in 4 hour MACD. EUR/CHF is also approaching a 1.0737 cluster support. There is prospect of some recovery in both Euro crosses. That might help finally push EUR/USD through 1.1880 resistance decisively, towards 1.1974 resistance. This would be a focus in the European session. 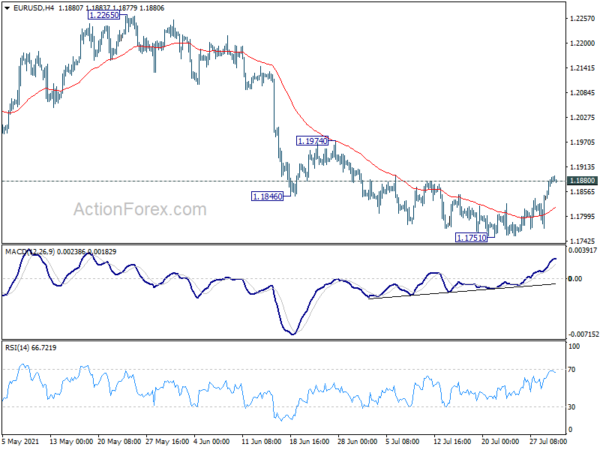 Japan industrial production rose 6.2% mom in June, above expectation of 5.0% mom. Output also revised much of the -6.5% mom decline in May. Manufacturers expected production to fall -1.1% mom in July and then rise 1.7% in August.

A government official said, “we are continuing to see the impact of the global chip shortage but it’s moderating somewhat, mainly for automakers… But manufacturers’ August output plan may not fully reflect the impact of the spread of new COVID-19 variants on global and domestic economies, as well as the risk of a prolonged chip shortage.”

Vice President Luis de Guindos said yesterday that “substantial monetary support” is needed for the economy “for some time to come. He added, “even if recovery is successful, there is still a lot of uncertainty.” Pace of inflation will “slow down again” next year as a number of one-off factors wane, such as the temporary VAT cut in Germany last year.

He also said that when to end the PEPP is a “medical question first and foremost”. He added,  “it depends on whether the vaccination campaigns are successful in combating the Delta variant and whether new, more resistant variants appear.”

Later in the data, US will release personal income and spending, with PCE inflation. Canada will release GDP, IPPI and RMPI.

EUR/GBP’s downside momentum diminished as seen in 4 hour MACD. But further decline is still in favor as long as 0.8555 resistance holds. Choppy corrective fall from 0.8718 is still in progress and could target a retest on 0.8470 low. On the upside, though, break of 0.8555 will turn bias back to the upside for 0.8668 resistance instead. 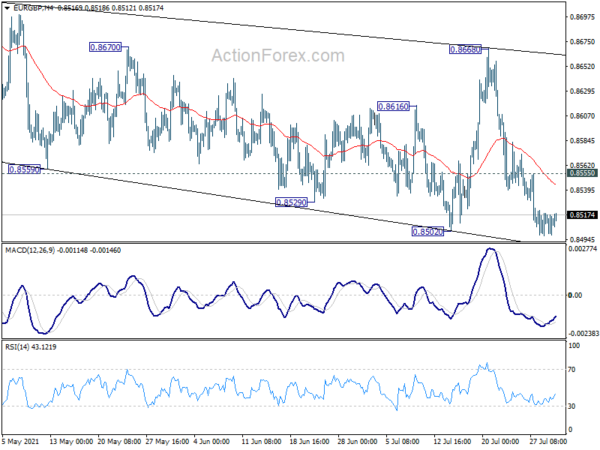 In the bigger picture, price actions from 0.9499 are still seen as developing into a corrective pattern. That is, up trend from 0.6935 (2015 low) would resume at a later stage. This will remain the favored case as long as 0.8276 support holds. However, firm break of 0.8276 support will suggest that rise from 0.6935 has completed and turn medium term outlook bearish. 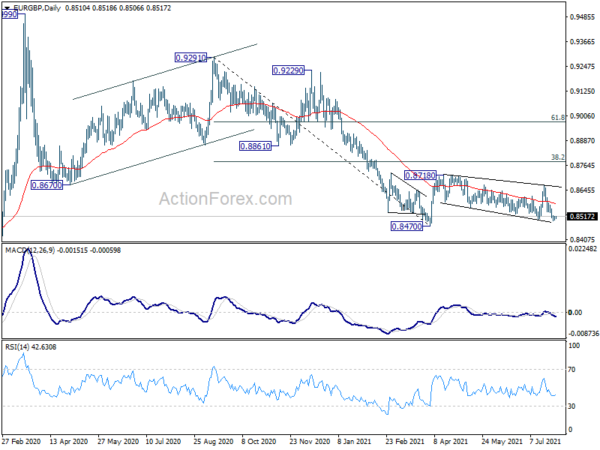