Another round of selling was seen in Dollar overnight, as US stocks extended record run. But Yen was even weaker, following the strong rally in treasury yields. It remains to be seen if investors are already starting to position themselves for the Jackson Hole symposium. For now, Yen, Dollar, and Swiss Franc are the worst performers for the week. New Zealand Dollar is the strongest, followed by other commodity currencies.

US 10-year yield jumped as focus turns to Jackson Hole

US 10-year yield staged a strong rally overnight, closing up 0.052 at 1.342. The development came as markets are awaiting the highly anticipated Jackson Hole Symposium, which kicks off today. While the main highlight is Fed Chair Jerome Powell’s speech on Friday, there would likely be continuous news flow of central banker comments ahead of that.

After Fed hawk Robert Kaplan’s comments the possibly of adjusting the timing of tapering, it seems less likely for Fed to make a September announcement. We’ll look forward to other Fed officials for guidance, as Powell would act like what he used you be, composed, balanced, but non-inspirational.

Some suggested reading on Jackson Hole:

As for 10-year yield, it’s back pressing 55 day EMA (now at 1.344) with yesterday’s rise. Sustained trading above there, followed by firm break of 1.420 resistance, should confirm that the correction from 1.765 has completed 1.128. That came after hitting 50% retracement at 1.1345. We should then see further rise back to retest 1.1765 high during the rest of the year, as the world is well-vaccinated to live with the coronavirus. 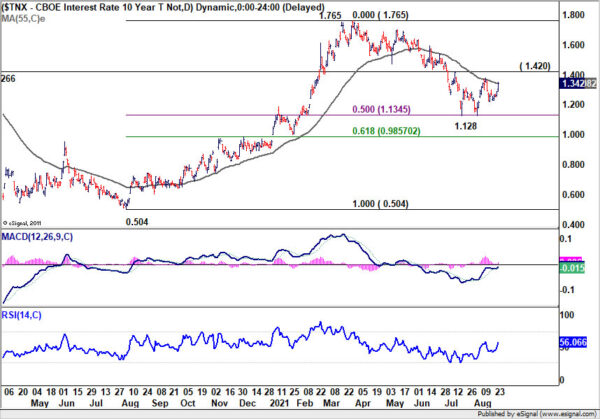 Japan corporate services price index rose 1.1% yoy in July, below expectation of 1.3% yoy. The increase was driven by 1.4% rise in transportation fees, and in particular, with international freight costs up 24.6%. Meanwhile, hotel service fees rose 10.8%, highest in six years, reflecting the impact of the Tokyo Olympics.

“The recent increase in infections will weigh on services producer prices, though we could see service demand perk up if progress in vaccinations help re-open the economy,” said Shigeru Shimizu, head of the BoJ’s price statistics division.

Bank of Korea raised interest rate by 0.25% to 0.75% today, becoming the first major Asian economy to hike. “The Board will gradually adjust the degree of monetary policy accommodation as the Korean economy is expected to continue its sound growth and inflation to run above 2% for some time, despite ongoing uncertainties over the virus,” the BOK said in its monetary policy statement.

Governor Lee Ju-yeol said, “we’ve decided to put the focus on reducing financial imbalances, and as we raise the rate, we are embarking on a process of normalizing policy in line with economic recovery.”

BoK maintained its forecast of 4% GDP growth this year. Consumer inflation forecast was, however, upgraded from 1.8% to 2.1%. 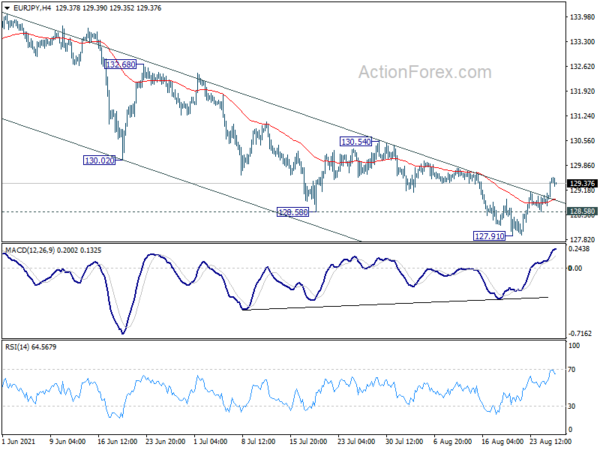 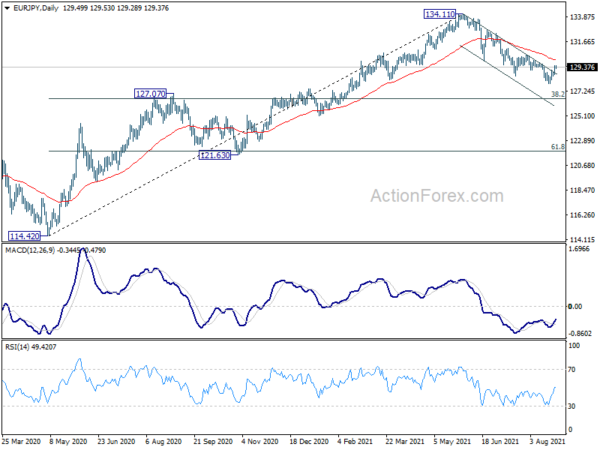