Dollar is trading as the weakest major currency for the week. Dovish comments from Fed officials are weighing on the greenback. Also stocks and yield played catch up after holding and suffered notable lost. DOW closed down -1.07% at 21753.31. 10 year yield dropped through last week’s low, losing -0.087 to close at 2.070. 2.0 handle is starting to look vulnerable as recent decline extends.

Japanese Yen is trading as the strongest major currency for the week on mild risk aversion. USD/JPY, despite the selloff, is holding above last week’s low at 108.26 so far. More notable move is seen in EUR/JPY, which drops through 129.65 minor support, which suggests more near term weakness. But that was mainly due to Euro’s softness ahead of ECB meeting. That can also be seen in EUR/GBP which is extending near term fall from 0.9305.

In other markets, Gold turned into consolidation after hitting 1349.7 and is yet to take out 1350 handle firmly. WTI crude oil jumped to as high as 48.98 so far. But strength in oil is not transferred to Canadian Dollar yet as BoC rate announce looms.

Past Fed hike could have hurt the economy

Minneapolis Fed President Neel Kashkari, a known dove, warned that "it’s very possible that our rate hikes over the past 18 months are leading to slower job growth, leaving more people on the sidelines, leading to lower wage growth, and leading to lower inflation and inflation expectations." And, these "premature rat hikes" are "not free". He criticized that Fed might be making "one of two fundamental mistakes". Firstly, Fed is "overestimating how tight the labor market is". secondly, Fed "allowed inflation expectations to drift lower".

Dallas Fed President Robert Kaplan while hurricane Harvey was a "significant" event, it doesn’t change his view on the timing about unwinding Fed’s USD 4.5T balance sheet. He maintain that Fed should start it "as soon as possible". But regarding another rate hike, Kaplan said that "I actually believe we should be patient here". Fed Governor Lael Brainard also said that Fed should be " cautious about tightening policy further until we are confident inflation is on track to achieve our target." She also noted that "there is a high premium on guiding inflation back up to target so as to retain space to buffer adverse shocks with conventional policy." And she emphasized that " it is important to be clear that we would be comfortable with inflation moving modestly above our target for a time."

In UK, Brexit Secretary David Davis told the parliament that UK and EU continues to have "significant differences" over the divorce bill. And two sides have "very different legal stances" on the amount. Davis also said that "time pressure as a pressure point to put up against Britain". But he warned that it is "a pressure tactic to make us pay". Sabine Weyand, EU’s deputy Brexit negotiator, told the Bundestag that she doesn’t seen the chance of making sufficient progress for EU leaders to give a go to move on to trade agreement in October. The fourth round of talk is scheduled to being on September 18.

A draft document on UK’s plan for post-Brexit immigration system was leaked to the Guardian and published. The proposals in the document are to be endorsed by ministers and subject to negotiation with EU. But it’s also triggered much controversies as some believed that it targets low skilled EU migrants. Some MPs reacted furiously to the document as criticized it as a "mean and cynical approach". Chair of the home affairs select committee Yvette Copper said the document "seems to contradicts the home secretary’s decision just over a month ago". Meanwhile, German MEP Elmar Brok, who’s one of European Parliament’s Brexit officials, warned that the proposal will " increase the lack of credibility and deepen mistrust". It would make it even harder to reach agreement on divorce by October.

BoC to stand pat and wait for October

The focus today is on the BoC meeting. Recent strong dataflow from Canada has raised bets for a rate hike this month. Real GDP growth accelerated to 4.5% in 2Q17, form 3.7% in the prior quarter. The improvement was significantly better than expected. However, inflation has stayed way below target. It would also be prudent for BoC to be more cautious over tightening the monetary policy as NAFTA talks remain highly uncertain. We expect policymakers to keep the policy rate unchanged at 0.75%, while a rate hike would be implemented in October. The surprisingly strong second quarter GDP growth would also lead the central bank to upgrade its economic forecasts at the October meeting.

USD/CAD is losing some downside momentum as seen in 4 hour MACD. But still, with 1.2490 minor resistance intact, intraday bias stays on the downside. Current decline from 1.3793 (and 1.4689) is expected to continue and target next long term fibonacci level at 1.2048. On the upside, above 1.2490 will turn focus back to 1.2662. Break there will be the first sign of near term reversal.

In the bigger picture, price actions from 1.4689 medium term top are seen as a correction pattern. Such corrective fall is expected to extend to 50% retracement of 0.9406 to 1.4869 at 1.2048. At this point, we’d look for strong support from there to contain downside and bring rebound. Break of 1.2777 resistance will indicate reversal and turn outlook bullish for 1.3793 key resistance. However, sustained break of 1.2048 will carry larger bearish implications and bring deeper decline. 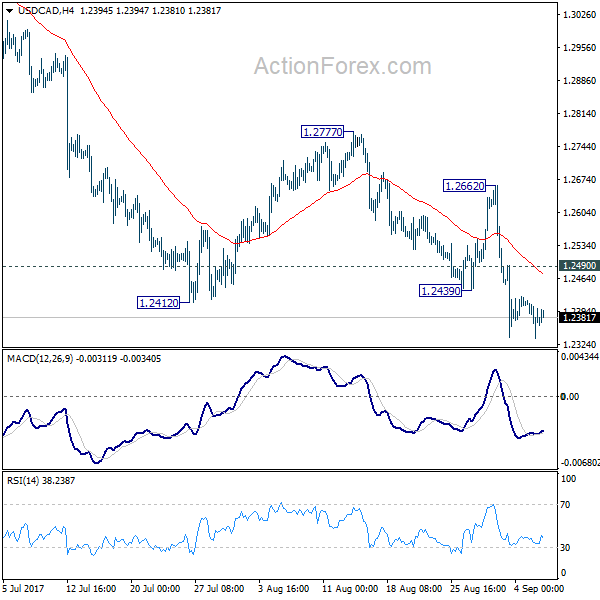 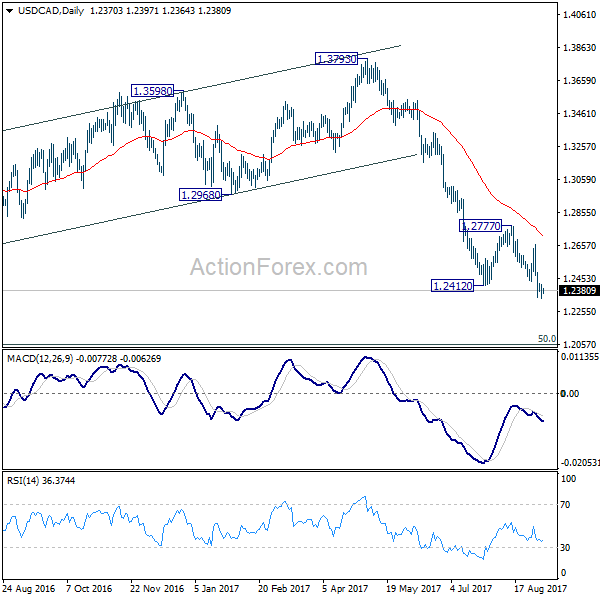