Fresh selling is seen in Dollar as most of the event risks for the week are past. Weakness in Dollar is also accompanied by falling treasury yield, with 10 year yield closed down -0.047 at 2.061. USD/JPY finally takes out 108.12 key support level in Asian session, resuming medium term fall from 118.65. EUR/USD was also lifted after ECB meeting yesterday and took out near term resistance at 1.2069. But for the week, commodity currencies are particularly strong. USD/CAD also started diving early this week after BoC’s rate hike. 1.2 handle is now within touching distance and Canadian Dollar will look into employment data for further strength. AUD/USD also takes out 0.8065 resistance today to resume larger rally. In other markets, gold continues to extend recent strong rise and is trading above 1360 handle now. WTI crude oil, however, is struggling to take out 50 handle again.

Hawkish Fedspeaks give no support to Dollar

Comments from Fed officials were hawkish yesterday, but they give little support to the greenback. New York Fed President William Dudley maintained that "even though inflation is currently somewhat below our long-run objective", it is "still appropriate to continue to remove monetary policy accommodation gradually". He noted that, with dollar’s depreciation and "fading of effects from a number of temporary, idiosyncratic factors", inflation will climb back to 2% target over the "medium term". And Dudley expects the US economy to "continue to perform quite well".

Cleveland Fed President Loretta Mester also noted that "if economic conditions evolve as anticipated, I believe further removal of accommodation via gradual increases in the fed funds rate will be needed and will help sustain the expansion". And she advocates that raising interest rate periodically "removes policy ambiguity at a time when uncertainty seems to be rising on other fronts."

Yesterday, ECB left the policy rates unchanged as widely expected. It also kept the QE program at a pace of 60B euro per month until end of 2017, or longer if needed. At the press conference, President Mario Draghi acknowledged in the post meeting press conference that growth in the Eurozone is solid and broad-based. At the same time Draghi also promised to "decide on the calibration" of its policy instruments beyond this Autumn. He went further to say that the "bulk of the decisions" will come at the October meeting. Regarding a recent hot topic in exchange rate, Draghi noted that a "few" members express concerned back in July. And those concerns were reiterated by "most" members this time. And recent volatility in the exchange rate is seen as a source of uncertainty that requires monitoring. Nonetheless, while financial conditions "unquestionably tightened" following Euro’s rise, they remain "broadly supportive" for non-financial enterprises.

China’s trade surplus narrowed to USD 42.0b in August, from USD 46.7B and missed expectation of USD 48.6b. Imports grew 13.3% yoy, well above expectation of 10.0% yoy. Imports also maintained July’s pace at 11.0% yoy. However, exports softened and grew only 5.5%, below expectation of 6.0% yoy and notably slower than July’s 7.2% yoy. China’s foreign current reserves rose for a seven straight month in August. Reserves jumped USD 10.81b to USD 3.092T. But the number was well below economists expectation of USD 19b. 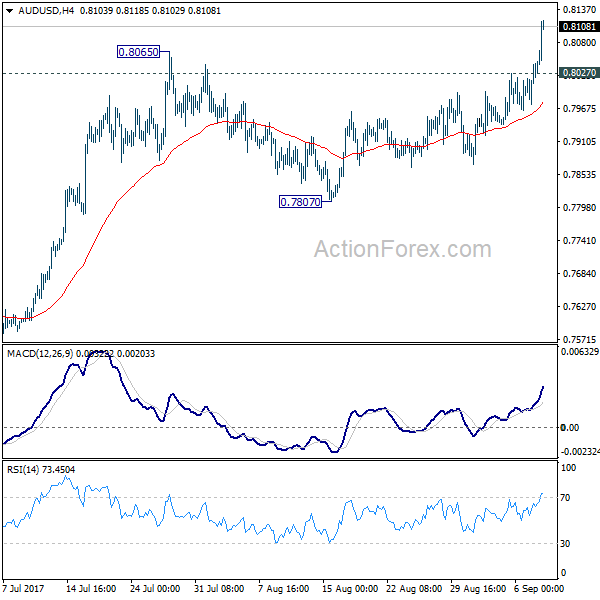 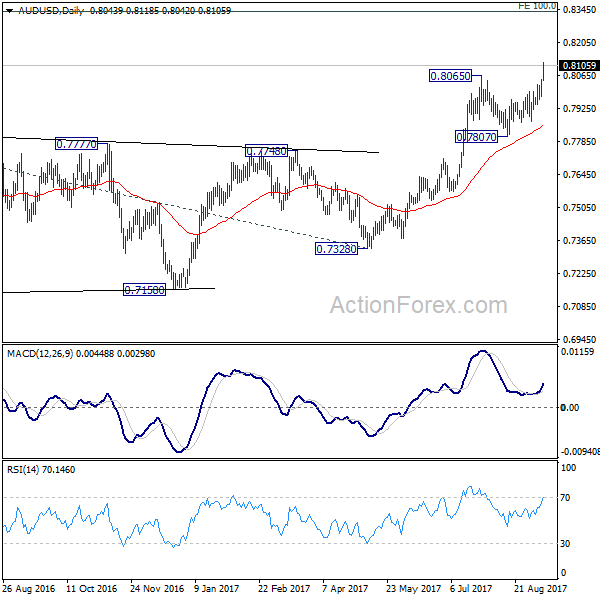