Risk appetite staged a strong strong return as DOW closed up 259.58 pts, or 1.19%, to close at 22057.37 overnight. S&P 500 also gained 26.68 pts, or 1.08%, to 2488.11, a record close. 10 year yield also responded positively, gaining 0.064 to 2.125. Gold, on the other hand, extended this week’s sharp pull back and is back below 1330. Asian markets followed with MSCI Asian Pacific ex Japan hitting the highest level since 2007. Sentiments were given a boost after United Nation Security Council passed fresh sanctions against North Korea. It may be a slap in the face to the US as it can only get a much watered down version of the sanctions approved. But the fact that there is no outright ban on oil supplies to North Korea means the threat of an immediate military confrontation should have eased. And that was cheered by investors. IN the currency markets, Canadian Dollar and US Dollar remain the strongest ones for the week while Yen and Swiss Franc are the weakest.

The United Nations Security Council passed tougher sanctions on North Korea yesterday. All 15 council members backed the resolution unanimously, including Russia and China. This came after the US compromised and tabled a much watered down version of the original draft of sanctions. The resolution imposes a ban on the pariah regime’s textile exports, such as fabrics and apparel products, and a ban its import of natural gas liquids. Textile is North Korea’s second-biggest export after coal and other minerals in 2016, totaling USD 752m.

On imports, the UNSC decided that all member states would "prohibit the direct or indirect supply, sale or transfer" to North Korea "of all refined petroleum products beyond 500K barrels during an initial period of three months (Oct 1 2107 to Dec 31, 2017) and exceeding 2M bpd per year during a period of 12 months beginning on Jan 1, 2018 and annually thereafter. Meanwhile, the members would "not supply, sell or transfer crude oil" to North Korea "in excess of the amount supplied, sold or transferred by that State in the 12-month period prior to the adoption of today’s resolution".

The US initially proposed to include an oil embargo, but this was objected by Russia and China, the two permanent UNSC members possessing veto power to reject the entire resolution.

In UK, the House of Commons approved the European Union (Withdrawal) Bill by a vote of 326 to 290, passing the first hurdle in Parliament. The bill is now approved in principle, but there will be challenges from lawmakers on the details and requests for amendments before a final vote later this year. There will be 64 hours of debate over eight days as lawmakers scrutinize the bill line-by-line. In short, the so called Repeal Bill aims at converting EU laws and regulations into UK legislations on the day on Brexit in March 2019.

Prime Minster Theresa May hailed that "Parliament took a historic decision to back the will of the British people and vote for a bill which gives certainty and clarity ahead of our withdrawal from the European Union" And, "this decision means we can move on with negotiations with solid foundations and we continue to encourage MPs from all parts of the UK to work together in support of this vital piece of legislation."

A number of ECB officials spoke yesterday. The general tone is that while remaining cautious, it’s about time to make the decision to scale back stimulus in gradual manner. Executive Board member Sabine Lautenschlaeger said that "the economy in the euro area is doing better and the conditions are in place for inflation to pick up and move steadily toward our goal." And, "we have to be prepared to take tough decisions in good time. We also have to adapt our communications accordingly." Another Executive Board member Yves Mersch said that "over the course of autumn we will see how far our instruments should or have to be adapted on the basis of new insights and how confident we are that we can withdraw the support to the economy through our monetary policy."

Governing Council member Ardo Hansson wrote in an article that "too much emphasis has been put on the fears of policy normalization." And he emphasized that "the process of normalization of policy stance is very gradual, and in fact it has been already started." Another Governing Council member Ewald Nowotny also said that the plan to scale back stimulus must be "well designed, it has to be gradual, clear and consistent with our reaction function and our forward guidance."

ECB President Mario Draghi said last week that the "bulk" of decisions on recalibration of the stimulus will be made at the October meeting.

Australia NAB business condition rose to 15 in August up from 14, and hit the highest level since 2008. However, business confidence tumbled notably to 5, down from 12. It’s also the first time it dropped below its long-term average since mid-2016. NAB chief economist Alan Oster noted that "for those indicating deterioration in confidence, the biggest concerns appear to be customer demand, government policy, as well as cost pressures – both energy and wages." But, it’s "it is probably too early to read much into the drop in confidence this month." And, "household consumption is a notable point of difference between our relatively subdued growth outlook and the RBA’s more sanguine forecasts, and will be key to the economy’s sustained return to trend growth."

UK inflation data will be the main focus of the day. In particular, headline CPI is expected to climb back to 2.8% yoy in August. RPI and PPI will also be released.

Intraday bias in GBP/JPY remains on the upside for as rebound from 139.29 continues. As noted before, fall from 147.76 has completed at 139.29 already, on bullish convergence condition in 4 hour MACD. Further rise should be seen for 147.76/148.42 resistance zone. Overall, price actions from 148.42 are seen as a sideway consolidation pattern. Break of 141.17 support will turn bias to the downside and bring another fall. But downside should be contained by 135.58 cluster support to bring rebound. 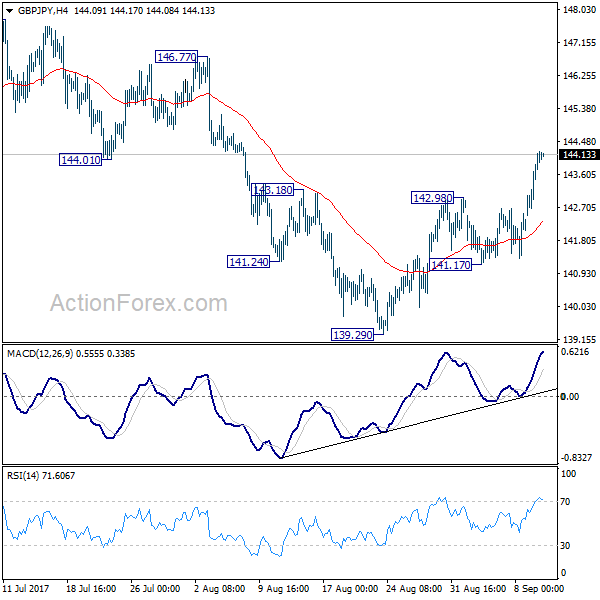 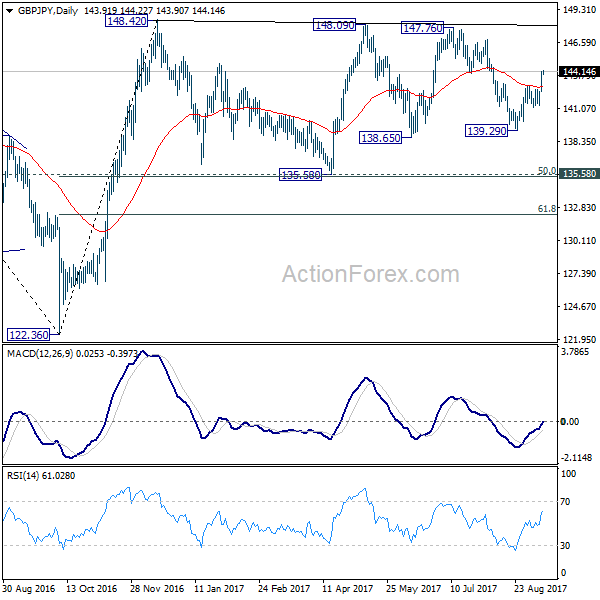