Much volatility is seen in the markets today, in particular in Sterling. The Pound tumbled sharply on news that the UK Government to going to activate a plan B and impose some restrictions as soon as on Wednesday, due to spread of Omicron. Yet, sentiments recovered After Pfizer said results from an initial laboratory showed their vaccine could neutralize Omicron after three doses. For now, Sterling is still the weakest one for today, while Euro and Aussie are the strongest. 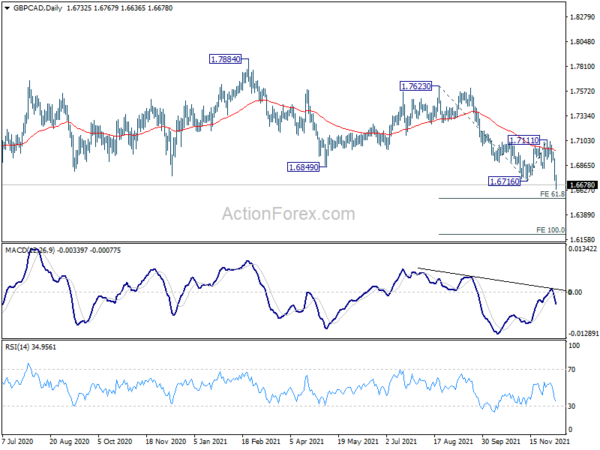 ECB Governing Council member Martins Kazaks said in an interview that the PEPP emergency asset purchase program would still end as scheduled in March, despite Omicron.

“At the current moment, we don’t know how the omicron variant will develop,” Kazaks said. “Unless it spills over into significant and large negative revisions to the outlook for growth, I don’t see that March — which the market has been expecting for some time and which we’ve been communicating in the past — should be changed.”

“At the moment we simply know too little about omicron,” he said. “I see it important to remain data-driven and make our decisions step by step. So react to the data, rather than preempt decisions when uncertainty is way too high.”

“If in February we see that it’s painful then of course we can change our views and that’s the issue of flexibility,” he said. “In my view, it’s possible both to restart PEPP or increase the envelope if it turns out to be necessary.”

On inflation, Kazaks said, “to exactly what level will it land in 2023-24, of course, there’s lots of uncertainty.” Nevertheless, “my baseline remains that it slides to below 2%.”

BoJ Deputy Governor Masayoshi Amamiya said in a speech that Japan’s inflation rate is still “far below the price stability target of 2 percent”. CPI is projected to be just around 1% even in fiscal 2023, the end of the current projection period. Therefore, BoJ will “persistently continue with powerful monetary easing” under the current QQE with yield curve control.

While central banks in US and Europe have recently started adjusting their monetary policy, the situation is different in Japan. Amamiya said, “given the price developments in Japan I have described, I think it makes sense that the Bank does not actually need to adjust its large-scale monetary easing at present”.

EUR/GBP’s rise from 0.8379 resumed by breaking 0.8549 and intraday bias is back on the upside for 0.8593 structural resistance. Sustained break there will be the first sign of larger bullish reversal and target 0.8656 resistance next. On the downside, break of 0.8487 support is needed to indicate completion of the rebound. Otherwise, near term outlook will stay cautiously bullish in case of retreat. 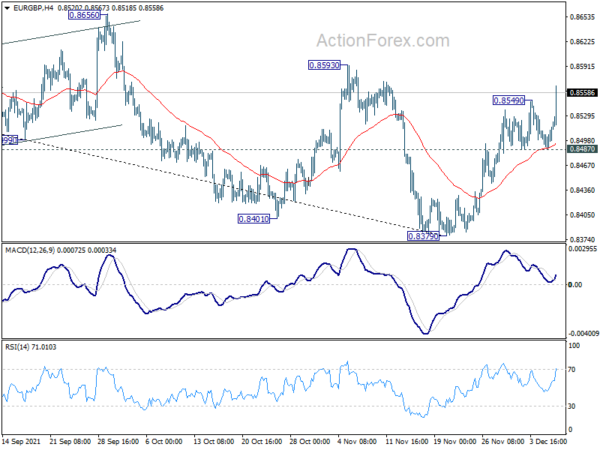 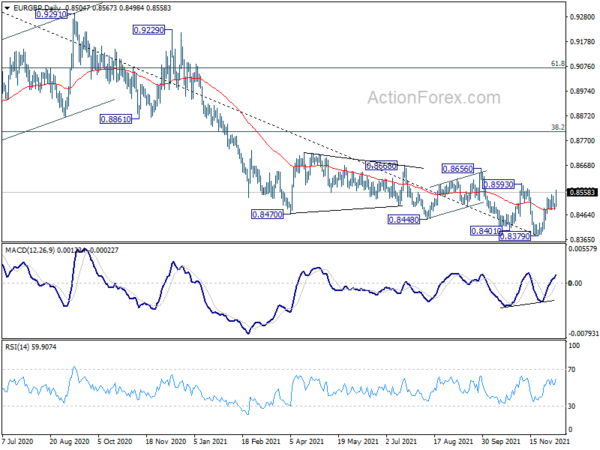