Risk appetite remains strong in the markets. And the provocative response from North Korea on fresh sanctions is largely ignored. S&P 500 closed up 8.37 pts, or 0.34%, at 2496.48 overnight, making another record high. DOW also rose 61.49 pts, or 0.28%, to close at 2118.86, a record, even though it’s short of intraday record at 22179.11. NASDAQ also scored a record close at 6454.28, up 0.34%. Sentiments are also positive in Asia with Nikkei trading up 0.5% at the time of writing. Gold continues to suffer as it struggles to regain 1340 handle. In the currency markets, British Pound remains the strongest one for the week as boosted by the CPI release yesterday. Commodity currencies are also firm together with Dollar. Meanwhile, Yen, Swiss Franc and Euro are trading as the weakest ones for the week.

North Korea has just issued an official response to the fresh sanctions approved by United Nations Security Council earlier this week. The foreign ministry condemned the sanctions as "another illegal and evil" one as "piloted by the US. It said in a statement that it aimed at  "completely suffocating its state and people through full-scale economic blockade". And it "served as an occasion for the DPRK to verify that the road it chose to go down was absolutely right." North Korea pledged to "redouble the efforts to increase its strength to safeguard the country’s sovereignty and right to existence." The country’s ambassador to the UN, Han Tae Song, also said yesterday that the country is "ready to use a form of ultimate means". And, "the forthcoming measures … will make the U.S. suffer the greatest pain it ever experienced in its history."

Trump criticized US proposed sanctions as "not a big deal"

On the other hand, US President Donald Trump criticized the sanctions that his own country has tabled to UNSC. He said "it’s just another very small step, not a big deal." And Trump added that "I don’t know if it has any impact, but certainly it was nice to get a 15-to-nothing vote, but those sanctions are nothing compared to what ultimately will have to happen." Treasury Secretary Steven Mnuchin warned that if China doesn’t follow through on the sanctions on Korea, the US would "put additional sanctions on them and prevent them from accessing the U.S. and international dollar system."

Brexit negotiations delayed for a week to Sep 25

The next round of Brexit negotiation between EU and UK is originally scheduled for next week, starting September 18. But it’s now be postponed by a week to September 25 to "allow more time for consultation". In a statement, UK said that "both sides settled on the date after discussions between senior officials in recognition that more time for consultation would give negotiators the flexibility to make progress in the September round." The decision came just a week after  European Parliament’s chief Brexit negotiator Guy Verhofstadt said UK Prime Minister Theresa May was preparing to make an "important intervention… in the coming days".

Sterling is holding on to the post CPI gains and remains the strongest currency for the week. Recapping yesterday’s release, headline CPI accelerated to 2.9% yoy in August, up from 2.6% yoy, and beat expectation of 2.8% yoy. That’s also the highest level in a year. With re-acceleration in headline CPI, there is very little chance that hawks Michael Saunders and Ian McCafferty would change their mind. Both are very likely to continue to vote for a 25bps hike. And there is chance that chief economist Andy Haldane would finally put his hawkish words into vote. But after all, the hawks are still short of two votes to push through a hike. Still, its likely that BoE will step up its warning on rate hike, in particular the pace of the path in coming years.

In Germany, Chancellor Angle Merkel’s Christian Democratic Union (CDU) is maintaining solid lead over rival Social Democrats (SPD). According to the latest weekly poll by Insa, CDU is having 36.5% support while SPD is having 23.5%. Most critics consider the race for the next Chancellor over with the solid lead. The question is whether CDU and its natural coalition partner Free Democrats (FDP) are able to secure a majority. Meanwhile, it’s reported that Merkel will very likely keep "Wolfgang Schaeuble" as Finance Minister after winning the election.

In Japan, Prime Minister Shinzo Abe declined to comment on who would succeed BoJ Governor Haruhiko Kuroda after his five year terms ends in April next year. And, Abe didn’t comment on whether Kuroda’s term would be renewed. But he hailed that Kuroda’s massive monetary stimulus has boosted employment and  "created a situation where Japan was no longer in deflation." Abe emphasized that it’s important to hit the 2% target and "stabilizes at that level". And, "the government expects the BOJ to continue efforts to meet the target." Meanwhile, Abe said he’s still on track to raise sales tax from 8% to 10% in October 2019.

Japan BSI large manufacturing rose to 9.4 in Q3, domestic CGPI rose 0.0% in August. Australia Westpac consumer sentiment rose 2.5% in September. German CPI final, Swiss PPI, Eurozone industrial production and employment will be released in European session. But UK data will be the focus again with employment data featured. US will release PPI later in the day.

Intraday bias in USD/CAD remains neutral as consolidation from 1.2061 temporary low continues. We’ll stay cautious on strong support from 1.2048 long term fibonacci level to bring sustainable rebound. But still, break of 1.2412 support turned resistance is needed to be the first sign of trend reversal. Otherwise, outlook will remain bearish. Firm break of 1.2048 will pave the way to next fibonacci level at 1.1424. 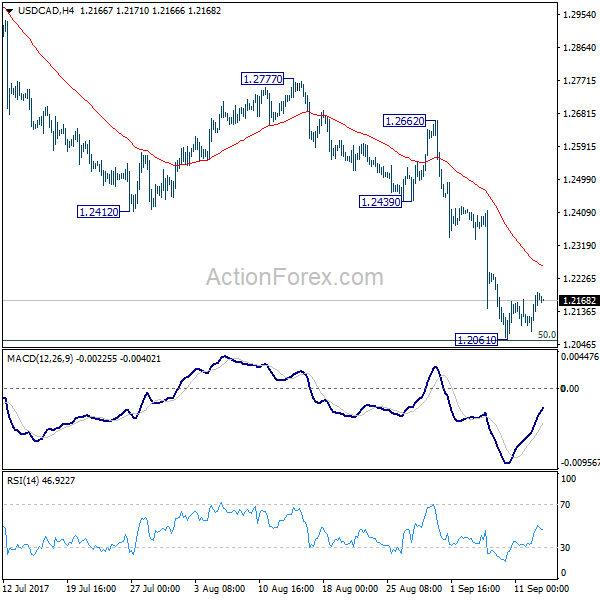 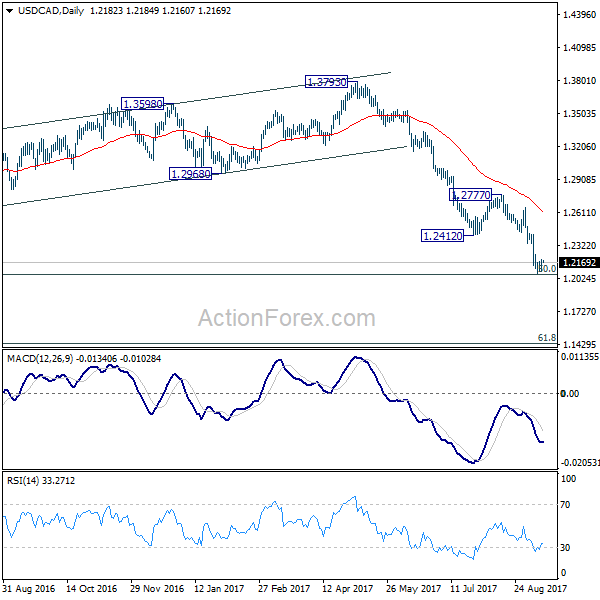