Yen is trying to recover on weaker risk sentiment today. But momentum is relatively soft against Dollar and Europeans. Aussie and Kiwi follow broader risk markets lower. Sterling and Dollar remain the strongest ones for the week, on expectation of hawkish BoE and Fed. Euro and Swiss Franc are mixed, with Euro having a slight upper handle. Traders could not turn more cautious until tomorrow’s non-farm payrolls report.

Technically, we’d now pay some attention to USD/CHF. Break of 0.9200 resistance will argue that fall from 0.9372 has completed with three waves down to 0.9101. Stronger rally would be seen to 0.9293 resistance and above. If that happens, it could be a prelude to EUR/USD’s downside range breakout. 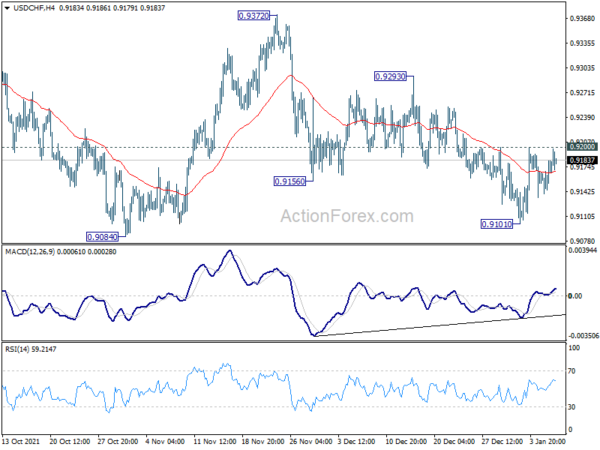 US initial claims rose to 207k, above expectation

Germany factory orders rose 3.7% mom in November, better than expectation of 2.5% mom. Comparing with October, Largest increase in new orders (32.0%) was recorded in the manufacture of other transport equipment (aircraft, ships, trains etc.) for which extensive major orders were reported. New orders in the manufacture of motor vehicles, trailers and semi-trailers were up by 7.0%. Not including major orders, an 3.8% increase in new orders in manufacturing was recorded.

The strong growth in new orders was attributable to foreign orders which increased by 8.0%. New orders from the euro area rose by 13.1%. New orders from other countries amounted to 5.0% in the current month. Domestic orders went up 2.5% in November 2021 on the previous month.

Tim Moore, Economics Director at IHS Markit: “December data revealed a severe loss of momentum for the UK economy as many customer-facing businesses experienced a drop in demand due to escalating COVID-19 cases. Total new orders in the service sector increased at the weakest pace for 10 months. Mass cancellations of bookings in response to the Omicron variant led to a slump in consumer spending on travel, leisure and entertainment. Survey respondents also noted that renewed pandemic restrictions had slowed the recovery in business services.

Wang Zhe, Senior Economist at Caixin Insight Group said: “To sum up, the economy recovered in December with improvements in demand and supply of manufacturing and services. Inflationary pressure eased. But the job market was still under pressure and businesses were less optimistic, raising questions about the stability of the economic recovery. The repeated Covid-19 flare-ups and sluggish overseas demand were challenges to stability.”

Bitcoin breaking down, 40k might only offer temporary support

Bitcoin finally breaks down and it’s now heading back to 41908 spike low. Prior rejection by 55 day EMA maintains near term bearishness and fall from 68986 is likely resuming. There might be some initial support between 39559/41908, around 40k handle. But outlook will stay bearish as long as 52101 resistance holds. 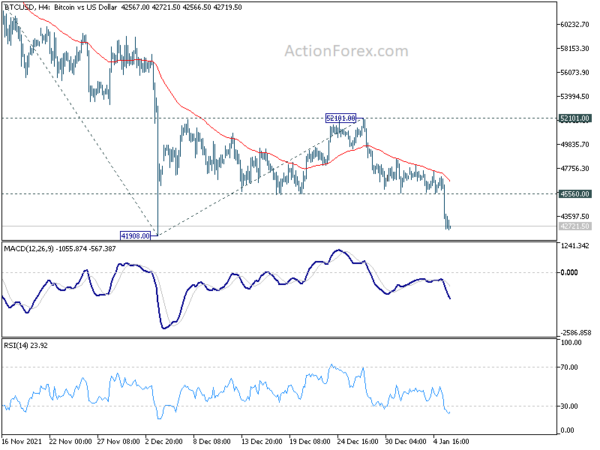 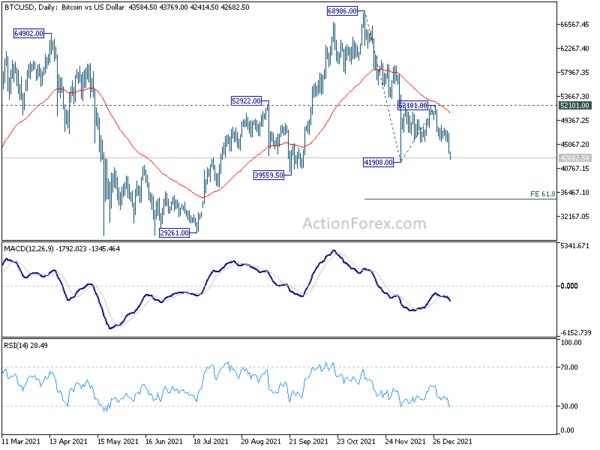 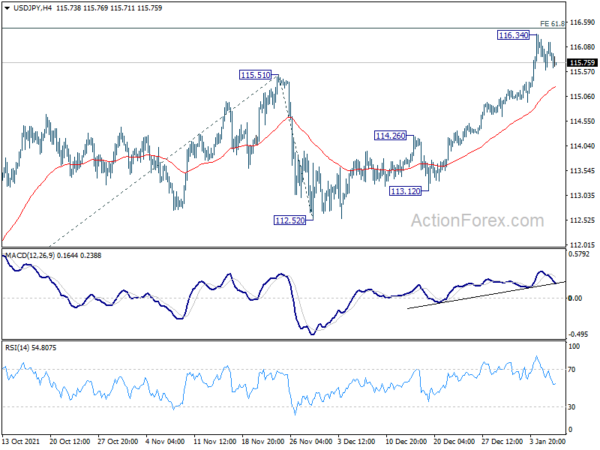 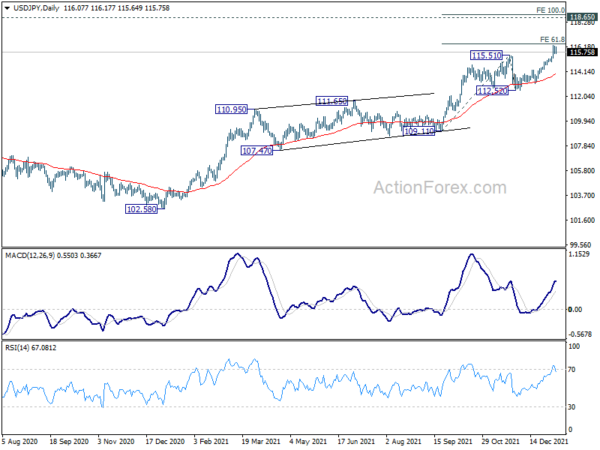