Euro turns softer in a quiet Asian session together with Swiss Franc, but Yen is even weaker. On the other hand, Aussie is ticking up slightly together with Loonie and Dollar. Overall, trading is rather subdued with major Asian stock indexes treading water in tight range, and Japan is on holiday. Focuses will turn to Fed chair Jerome Powell’s testimony, and US inflation data later in the week, which should bring the markets back to life.

Technically, we’ll keep an eye on Sterling. EUR/GBP is staying bearish, and it looks ready to resume the medium term down trend through 0.8333 temporary low any time. GBP/JPY is also still on track to retest 158.19 resistance, and resume larger up trend. Meanwhile, if GBP/USD could build up more momentum above 1.3570 support turned resistance, that would solidify the case of near term bullish reversal for 1.3833 resistance next. 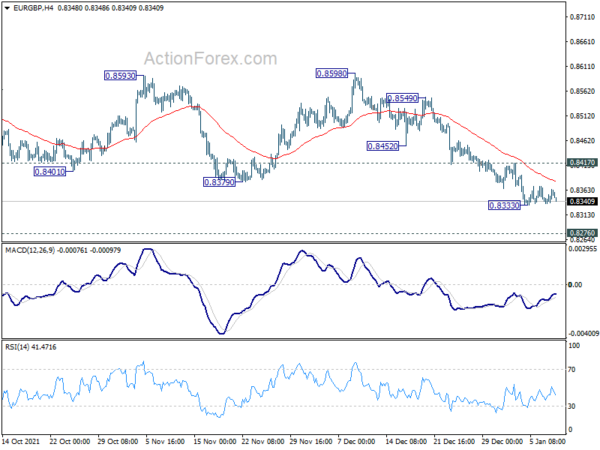 In an blog post, senior IMF officials said the continued to expect “robust US growth”. Inflation will “likely moderate” late this year as supply disruptions ease and fiscal contraction weighs on demand. Fed’s indication that it would raise interest rate more quickly “did not cause a substantial market reassessment of the economic outlook”.

“Should policy rates rise and inflation moderate as expected, history shows that the effects for emerging markets are likely benign if tightening is gradual, well telegraphed, and in response to a strengthening recovery,” the post noted.

However, “broad-based US wage inflation or sustained supply bottlenecks could boost prices more than anticipated and fuel expectations for more rapid inflation”.

“Faster Fed rate increases in response could rattle financial markets and tighten financial conditions globally. These developments could come with a slowing of US demand and trade and may lead to capital outflows and currency depreciation in emerging markets.”

ECB Schnabel: Rising energy prices may require a departure from a looking through policy

ECB Executive Board member Isabel Schnabel warned in a speech on Saturday, “monetary policy, for its part, cannot afford to look through energy price increases if they pose a risk to medium-term price stability.”

“This could be the case if prospects of persistently rising energy prices contribute to a deanchoring of inflation expectations, or if underlying price pressures threaten to lift inflation above our 2% target as rising carbon prices and the associated shifts in economic activity boost rather than suppress growth, employment and aggregate demand over the medium term.”

WTI oil back below 80 as Kazakhstan normalizes production

For now, we’re not expecting a break of 85.92 yet. We’d expect at least one more down leg before the corrective pattern from there completes. Hence, we’d look for topping between 83.86/85.92. 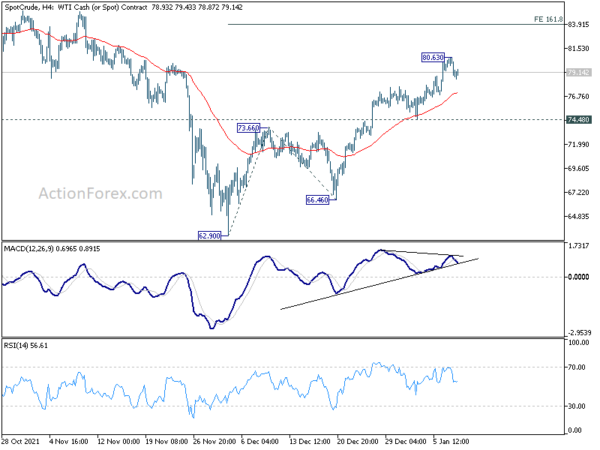 Fed Powell testimony and US inflation to move the markets

Fed Chair Jerome Powell’s testimony before Senate Banking committee will be a main focus of the week. Powell would likely be asked about his views on March rate hike, as well as the timing of off-loading the balance sheet. Additionally, CPI and PPI from the US would be equally market moving while retail sales will be featured. Elsewhere, a batch of data from China, UK and Australia will also catch some attention.

AUD/USD recovers mildly today but stays in range of 0.7081/7277. Intraday bias remains neutral for the moment. On the downside, break of 0.7081 support will indicate that corrective rebound from 0.6992 has completed with three waves up to 0.7277, after hitting 55 day EMA. Intraday bias will be back on the downside for retesting 0.6991/2 key support zone. Firm break there will resume larger down trend from 0.8006. On the upside, though, break of 0.7277 will turn bias to the upside to resume the rebound. 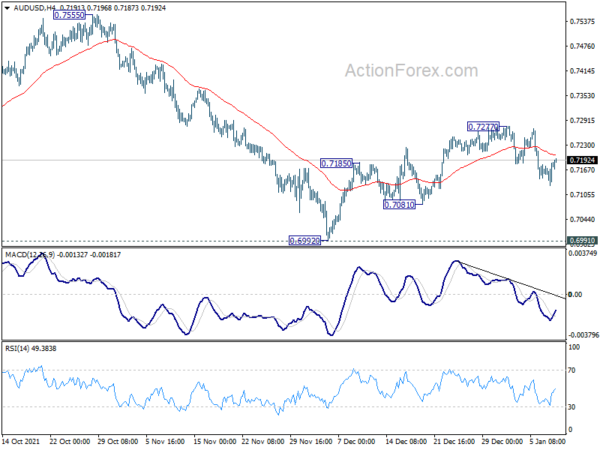 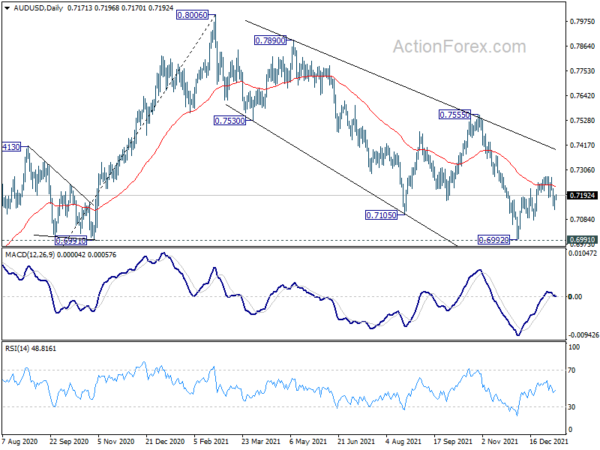