The markets are overall relatively quietly in Asian session today and trading could be subdued with US on holiday. Canadian Dollar is resilient with WTI oil staying firm at around 84 handle. Euro and Dollar are both strengthening notably. On the other hand, Yen, Aussie and Kiwi are softening. In particular, traders seem to be lightening up Yen positions ahead of tomorrow’s BoJ policy decision and statement.

Technically, while the selloff in USD/JPY was steep last week, EUR/JPY and GBP/JPY are staying in consolidative range only. In particular, GBP/JPY is holding comfortably above 154.86 minor support. We’ll turn our focus to 131.59 and 157.12 resistance in EUR/JPY and GBP/JPY today. Break there will resume recent rally in both crosses. If that happens, we’ll see if EUR/USD and GBP/USD would break through corresponding levels at 1.1482 and 1.3748.

The National Bureau of Statistics said, “we must be aware that the external environment is more complicated and uncertain, and the domestic economy is under the triple pressure of demand contraction, supply shock and weakening expectations.”

Bitcoin is now staying in consolidation above 39636 short term bottom, after quickly defending 40k handle. Considering that it’s sitting just above 39559 structural support too, the consolidation could extend for a while. But outlook will stay bearish for another fall to 61.8% projection of 68986 to 41908 from 52101 at 35366 before completing the decline from 68986 high.

The timing of the downside breakout will depend on the eventual reaction to 4 hour 55 EMA (now at 43211) which it’s struggling with. A strong break above 4 hour 55 EMA will stronger rebound to 55 day EMA (now at 48230) first, and rejected there to bring down trend resumption. Meanwhile, rejection by the current level could bring downside breakout rather quickly through 396363 to the mentioned 35366 target. 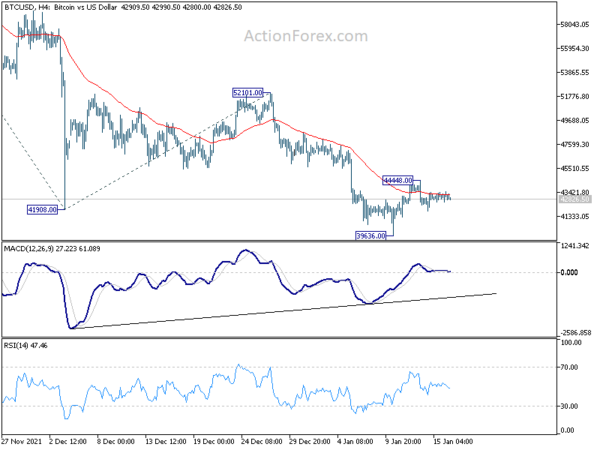 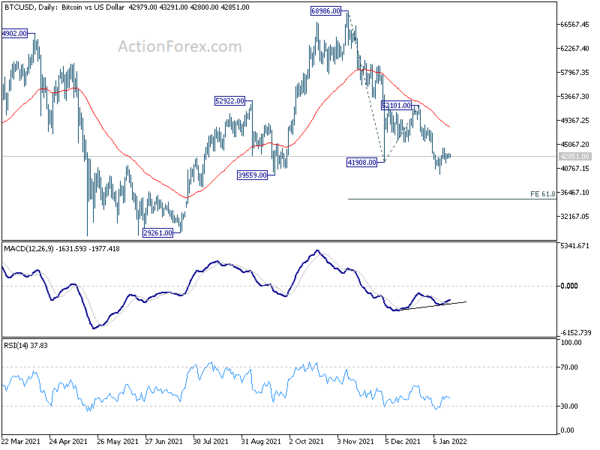 BoJ to highlight the week, with a batch of UK data

BoJ meeting is a focus for the week even though no policy change is expected. There are talks that debates on telegraphing a rate hike has already started between policymakers. While BoJ is still distant from actually delivering it, they may start to build up market expectations for an eventual hike, by gradually tweaking the forward guidance. It could also be argued that a hint on rate increase could help solidify positive inflation expectation. Meanwhile, CPI from japan will also be closely watched.

Elsewhere, UK will also release a batch of data including employment, inflation and retail sales. But it unsure if markets would shrug off them just like the strong GDP data released last week. Germany ZEW, Canada CPI and retail sales, Australia employment, and China GDP will also be closely watched.

Intraday bias in GBP/JPY remains neutral for the moment, and consolidation from 157.74 could extend. Overall, further rise is still expected with 154.86 support intact. On the upside, decisive break of 158.19 high will resume larger up trend to 167.93 long term fibonacci level. On the downside, below 154.86 minor support will turn intraday bias back to the downside for deeper pull back. 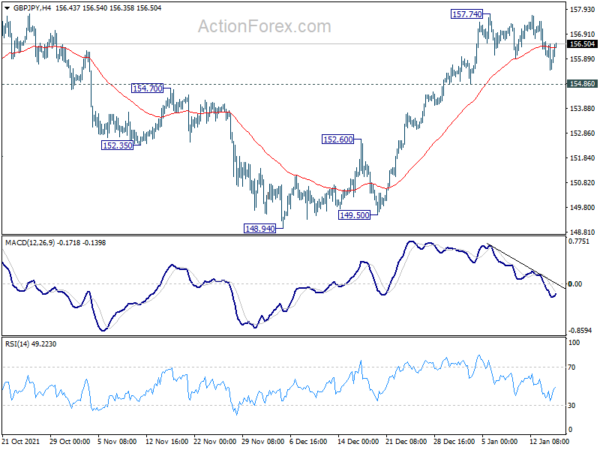 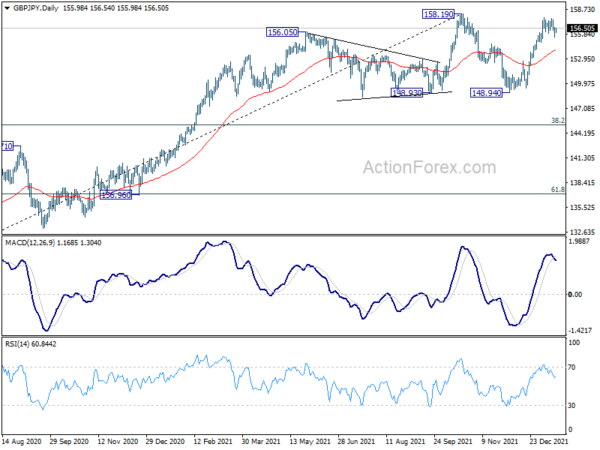