Dollar rebounded strongly overnight on news that the so called Big Six Republicans are finally going to release the framework of tax reforms in the week of September 25. Also, there is some optimism on the White House as US President Donald Trump seems to be employing a new strategy to reach out to Democrats. Also thanks to return of risk appetite and rebound in treasury yields, the greenback is now trading as the second strongest major currency for the week, next to Sterling. Nonetheless, technically, there is no confirmation of a trend reversal in Dollar yet. Markets could remain cautious on it until something concrete is delivered. For now, focus will turn to SNB and BoE rate decisions first, US CPI next.

House Ways and Means Committee Chairman Kevin Brady, the chief house tax writer, said the tax overhaul framework will be released in the week of September 25. Brady noted that the document will include "core elements of tax reports. And he emphasized that there is "really the consensus of the tax writers themselves so that we’re working from the same page". The group of writers include Speaker Paul D. Ryan, Senate Majority Leader Mitch McConnell, Senate Finance Committee Chairman Orrin G. Hatch, Treasury Secretary Steven Mnuchin, and White House economic adviser Gary Cohn. Trump also seemed to be using the hurricanes as pressure on the Congress for tax reforms. He tweeted that "with Irma and Harvey devastation, Tax Cuts and Tax Reform is needed more than ever before. Go Congress, go!"

Separately, Trump had a dinner with Democratic leaders of the House and Senate, Nancy Pelosi and Chuck Schumer, on Wednesday. After striking a deal with the Democrats for suspending the debt limit last week, it’s reported that Trump also reached a tentative "Dreamers" deal. It’s a legislation to protect around 800k undocumented children immigrants from deportation. At the same time, it’s reported that some Democrats are open to working on a bipartisan tax reform.

Australian Dollar is given a mild lift by better than expected employment data. The job market expanded by 54.2k in August, nearly triple of expectation of 19.2k. That consists of decent growth in full-time jobs by 40.1k and part-time jobs by 14.1k. Unemployment rate was unchanged at 5.6%, in line with consensus. Participation rate also rose to 65.3%. There is slight change in expectation of RBA policies after the data. Markets are pricing in roughly 50% chance of a hike in June 2018.

RBA board member Ian Harper said yesterday that while there is "terrific" full time job growth, it’s a "concern" to see sluggishness in underemployment. And, the Australian economy is still "operating below its potential". And it cannot justify a rate hike yet. Nonetheless, improvements in the economy prompted market analysts to reverse their forecast of RBA rate path. National Australia Bank predicted two rate cuts by RBA in 2017 earlier this year. But now’s NAB is expecting a total for four rate hikes by RBA over the next two years. Stronger employment, GDP growth and investment are the main reasons for the change in NAB’s forecast.

The latest set of macroeconomic data from China came in weaker than expected. Industrial production expanded 6% yoy in August, missing consensus of 6.6% and July’s 6.4%. Retail sales growth moderated to 10.1% yoy, form 10.4% in July. The market had anticipated an improvement to 10.5%. Urban fixed assets investment rose 7.8% in the eight months through August, decelerating from 8.3% in the first 7 months of the year. The slowdown came in much more than expectations of 8.2%.

BoE as the main focus, SNB watched too

The focus today is undoubtedly the BOE meeting. Overshooting inflation has raised bet for a rate hike. However, we expect the members to vote 7-2 to leave the Bank rate unchanged at 0.25% and the asset purchase at GBP 435b. Most members would remain cautious and cite slow economic growth and Brexit uncertainty as reasons for keeping the monetary policy accommodative. However, the MPC is expected to adopt a more hawkish tone, attributing the strong inflation to Sterling depreciation and cautioning over the underestimation of the urgency of a BOE rate hike. More in BOE To Maintain Status Quo With New Comer On Dovish Side. SNB would be meeting today. It is widely anticipated that the central bank would maintain the status quo, warning that the franc remains "overvalued" and the reiterating the commitment to combat deflation.

GBP/USD retreated after forming a temporary top at 1.3328. Intraday bias is turned neutral first. Outlook outlook is unchanged. Another rise could be seen in GBP/USD and above 1.3328 will target 1.3444 key resistance next. At this point, we’d maintain that price actions from 1.1946 are still seen as a corrective pattern. Hence, we’d expect strong resistance from 1.3444 to limit upside to bring larger down trend reversal eventually. Firm break of 38.2% retracement of 1.2773 to 1.3328 at 1.3116 will raise the chance of reversal and turn bias to the downside for 61.8% retracement at 1.2985. However, on the upside, firm break of 1.3444 will carry larger bullish implication and target 1.3835/5016 resistance first zone first.

In the bigger picture, overall, price actions from 1.1946 medium term low are seen as a corrective pattern. While further rise cannot be ruled out, larger outlook remains bearish as long as 1.3444 key resistance holds. Down trend from 1.7190 (2014 high) is expected to resume later after the correction completes. And break of 1.2773 support will be the first sign that such down trend is resuming. However, considering bullish convergence condition in monthly MACD, firm break of 1.3444 will argue that whole down trend from 2.1161 (2007) has completed. And stronger rise would be seen back to 38.2% retracement of 2.1161 to 1.1946 at 1.5466. 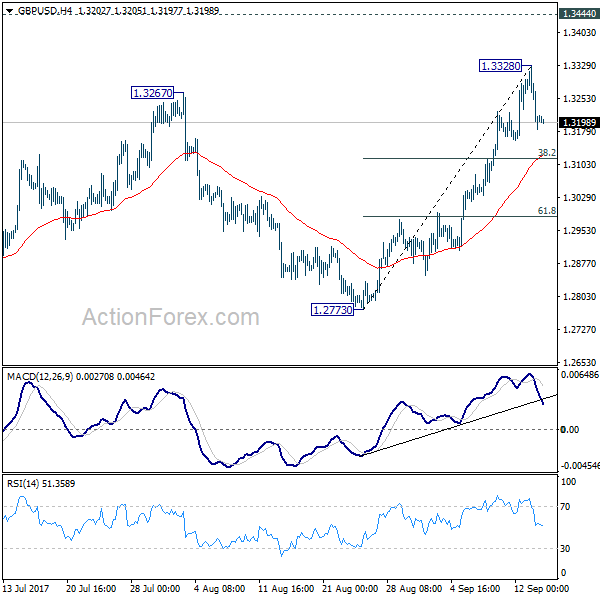 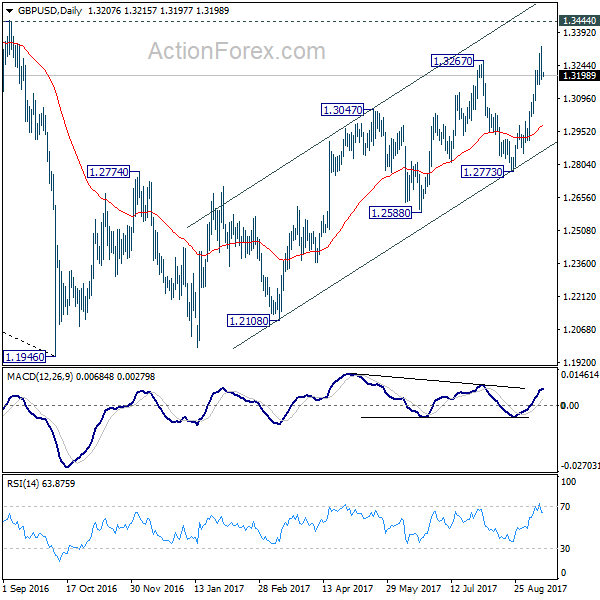