Dollar drops in early US session together with treasury yields after consumer inflation data. While headline CPI came in higher than expected, core CPI’s pick up missed expectations. Commodity currencies are trading generally higher as US futures point to a rebound in major stock indexes. European majors are also attempting a recovery but momentum is relatively weak. Yen is trading is tight range, consolidating recent losses.

Technically, a focus is now on whether USD/JPY would correct from current level, after rejection by 125.85 long term resistance. Bring of 124.66 minor support will bring deeper pull back. But overall, there shouldn’t be any change in the up trend. Any retreat should be contained above 121.27 support, to bring another attempt on 125.85 resistance. 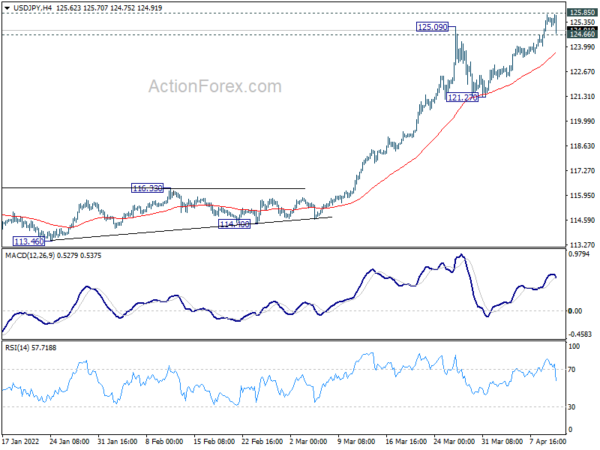 Germany ZEW economic sentiment dropped to -41, prospect of stagflation over…

“The ZEW Indicator of Economic Sentiment remains at a low level. The experts are pessimistic about the current economic situation and assume that it will continue to deteriorate. The decline in inflation expectations, which cuts the previous month’s considerable increase by about half, gives some cause for hope. However, the prospect of stagflation over the next six months remains,” comments ZEW President Achim Wambach.

Japan corporate goods price index rose 7.3% yoy in March, slowed from 9.7% yoy but beat expectation of 9.3% yoy. The March index, at 112.0, was the highest level since December 1982. The yen-based import price index surged 33.4% yoy, signaling that Yen’s depreciation could be amplifying import inflation.

Separately, Finance Minister Shunichi Suzuki warned, “The government will closely monitor developments in the foreign exchange market, including the recent depreciation of the yen with a sense of vigilance. That includes the impact on the Japanese economy.”

“Business confidence continued to improve in March, with little evidence of any adverse impact from events in Ukraine,” said Oster. “The outlook also strengthened in terms of forward orders which points to ongoing economic growth over coming months.”

Intraday bias in USD/CHF remains neutral for the moment. On the upside, firm break of 0.9380 should confirm that fall from 0.9459 has completed with three wave down to 0.9193. Such development will revive near term bullishness and turn bias back to the upside for 0.9459 and then 0.9471 resistance. On the downside, below 0.9280 minor support will turn bias to the downside for 0.9193 support next. 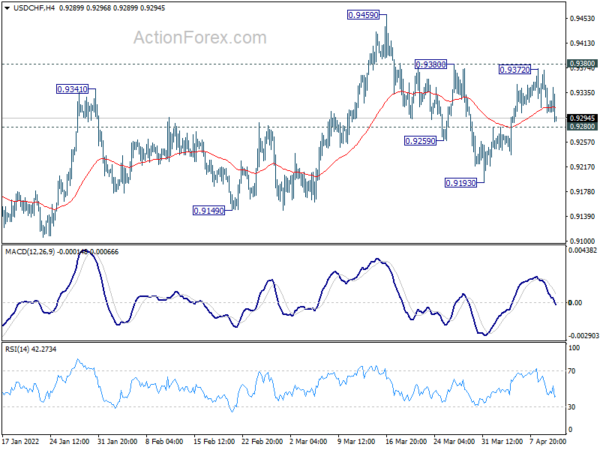 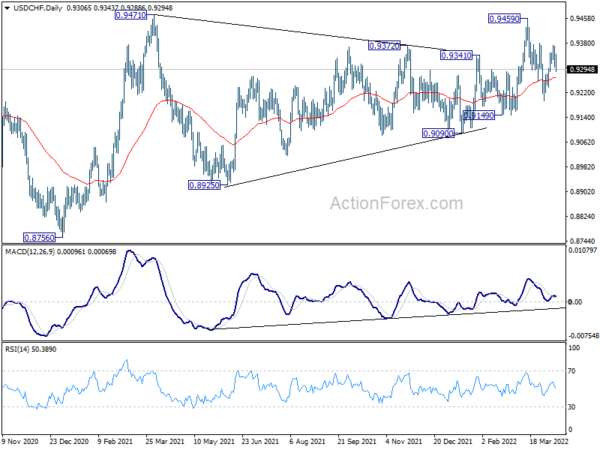