Yen, Swiss Franc, and Dollar are trading higher today on overall risk off sentiment. Selloff was particularly steep in Chinese stock markets on risks of more lockdowns in major cities, in particular Beijing. While European markets and US futures are in red, downside is relatively limited for now. Australian Dollar is still the worst performing one. But it’s hard to pick whether Euro, Sterling or Kiwi is the second weakest. 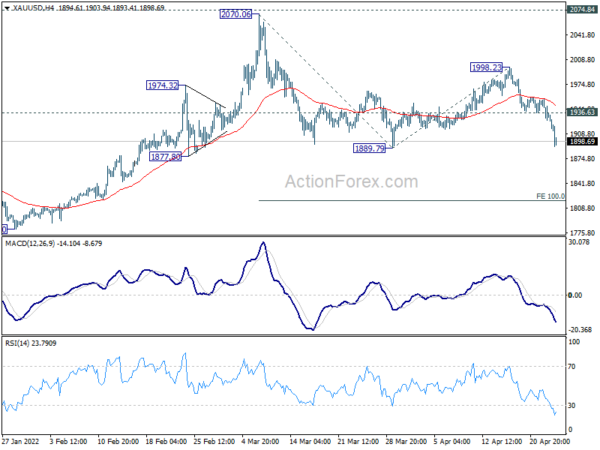 Ifo said, the improvement was “due primarily to less pessimism in companies’ expectations. Their assessments of the current situation are minimally better. After the initial shock of the Russian attack, the German economy has shown its resilience.”

Chinese stocks and Yuan on fear of lockdown spread

The markets in China were in free fall today on fears on the impact of the spread of coronavirus, and more importantly, imposition of strict covid zero policy and lockdowns. Beijing is the believed to be evolving into the next Shanghai, after the government ordered residents not to leave the Chaoyang district. 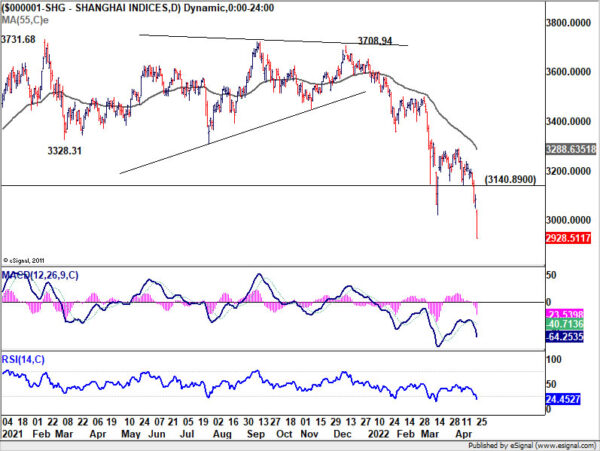 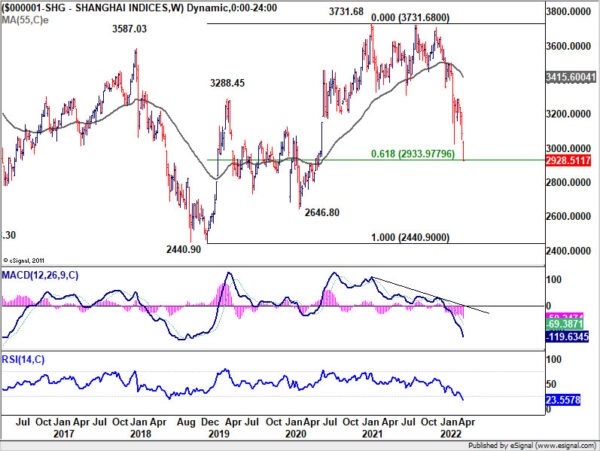 The decline in Chinese Yuan also looks unstoppable, even after the worst week since 2015 last week. PBOC announced to cut foreign exchange deposit ratio of financial institutions by 100 basis point, from 9.00% to 8.00%. The move is to improve the ability of financial institutions to use foreign exchange funds, and thus help stabilize Yuan from recent free fall. But the impact is so far limited.

USD/CNH (offshore Yuan) surged through 6.6 handle today, breaking through another important medium term resistance at 6.5872 (2021 high). The next hurdle is long term fibonacci resistance at 38.2% retracement of 7.1961 (2020 high) to 6.3057 (2022 low) at 6.6458. Strong resistance is expected there to cap upside on first attempt. But overall, break of 6.5214 support is needed to indicate short term topping. Otherwise, outlook will stay bullish in case of retreat. That is, there would be more downside in Yuan then not. 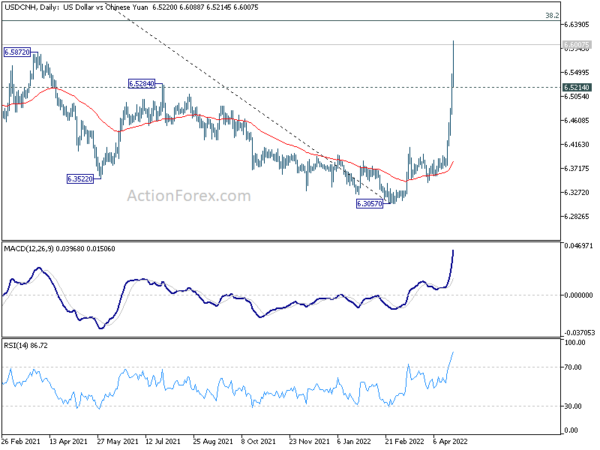 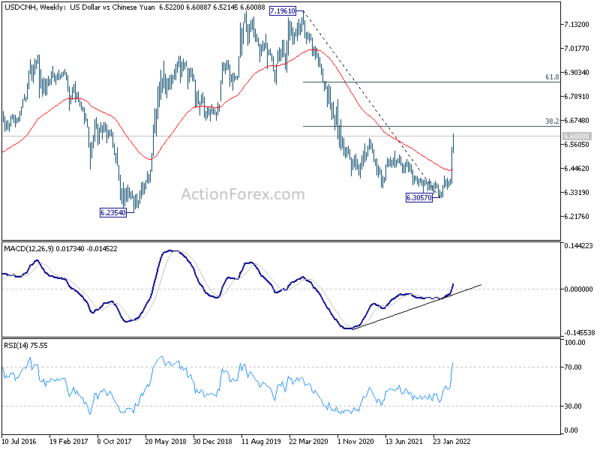 AUD/JPY is under some heavy selling today. The development should confirm that a short term top was formed at 95.73, on bearish divergence condition in 4 hour MACD. It’s now correcting the whole rally from 80.34. Deeper fall should be seen to 38.2% retracement of 80.34 to 95.73 at 89.85. Break of 93.27 minor resistance is needed to indicate completion of the pull back, or risk will stay on the downside. 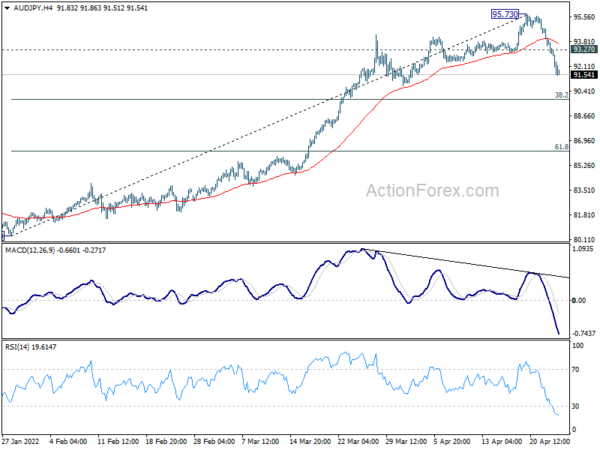 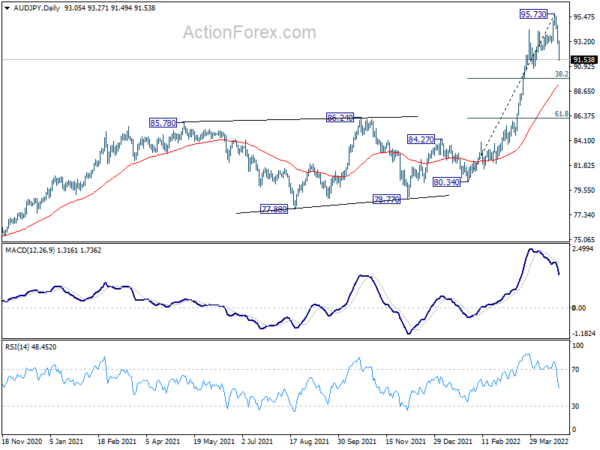 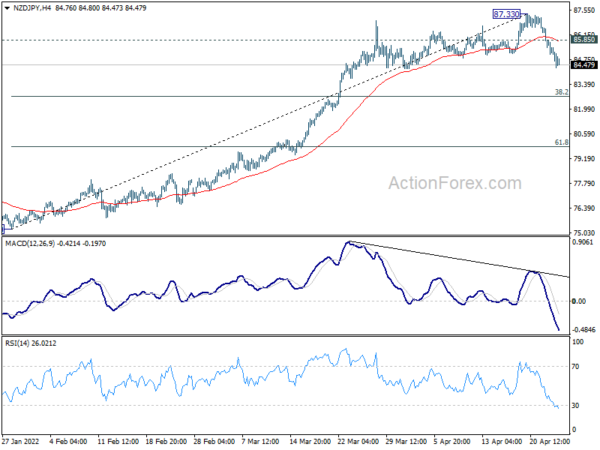 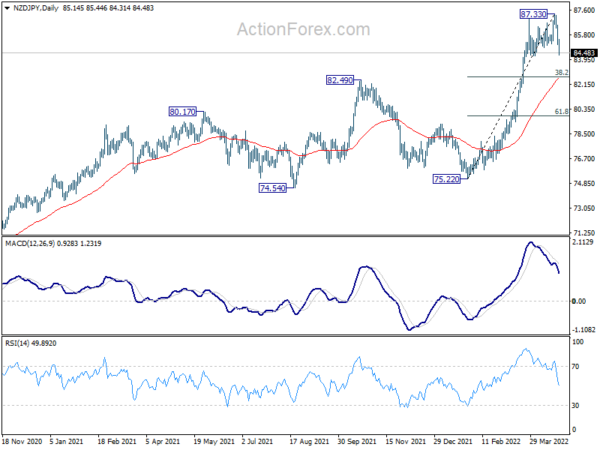 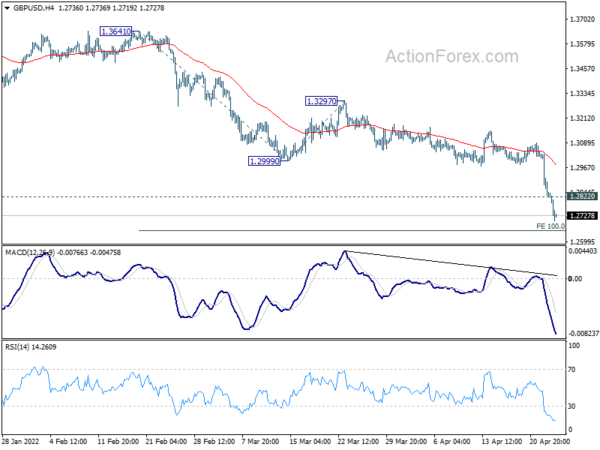 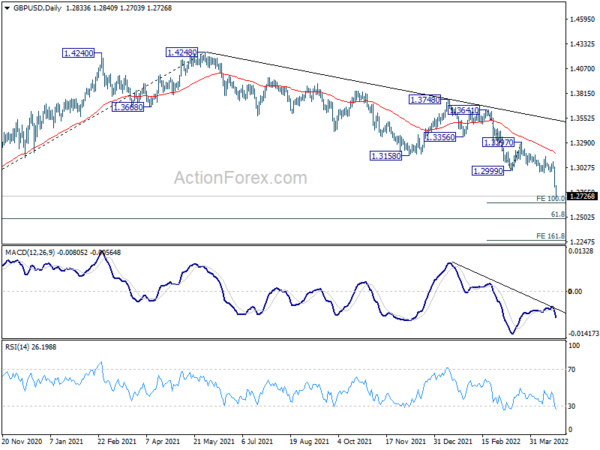