While the stock markets are steady, Aussie, Kiwi, and to a lesser extend Loonie, are trading generally lower. Decline in commodity and energy prices, on concerns over recession, appear to be weighing down on these currencies. Copper prices dropped to the lowest level since March 2021, while iron ore price has fallen 15% in 2 weeks. Yen is currently the stronger one for today, followed by Euro and Swiss Franc. Dollar and Sterling are mixed.

Technically, Aussie would be a focus for the rest of the week. Sustained break of 1.5354 support turned resistance will be a strong sign of medium term bullish reversal. At the same time, firm break of 1.7884 resistance in GBP/AUD would likely set the stage for further rebound to 55 week EMA (now at 1.8134) at least. 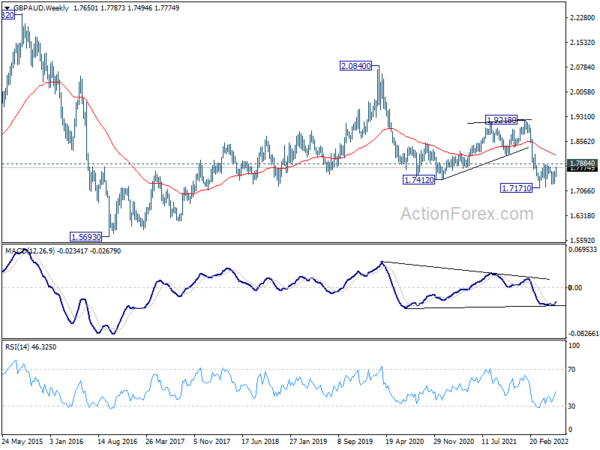 Philadelphia Fed President Patrick Harker said interest rates should go above 3% by the end of the year. Then Fed would assess how much more tightening is needed to bring inflation down.

“We don’t have to overreact in terms of the fed funds rate,” Harker said during a conference held by the regional Federal Reserve bank. “We need to get above neutral, again I’d like to get above three, but I don’t think you have to accelerate rapidly beyond that at this point until we get a better understanding of what exactly the quantitative tightening is doing.”

Fed Evans: Another 75bps hike in line with strong concerns on inflation

Chicago Fed President Charles Evans said another 75bps rate hike is a “very reasonable place” to have a discussion at next FOMC meeting. He said, “I think 75 would be in line with continued strong concerns that the inflation data isn’t coming down as quickly as we thought.”

“The first thing that we’re looking at is to make sure we take the steam out of the inflation pressures,” he added.

“We’re obviously taking on risk when we want to slow demand, to keep it in line with supply,” Evans said. “To think that we can fine tune something like this with tremendous precision — I mean, we just don’t have that ability.”

“Expansion across Australia’s private sector economy continued in June, according to the S&P Global Flash Australia Composite PMI. The easing of COVID-19 policies and opening of international borders has encouraged growth in demand, especially overseas. Stronger demand conditions have had a positive influence on other areas of the economy, with employment levels continuing to rise at a solid rate.

“That said, firms have taken advantage of rising demand levels and passed through higher costs to their selling prices at a substantial pace. With interest rates rising to contain rapid price pressures, as well as a fading boost to economic activity post-lockdown, downside risks to the Australian economy have increased.”

Japan PMI manufacturing dropped to 52.7, but services jumped to 54.2

“Activity at Japanese private sector businesses rose solidly at the midway point of 2022 as border restrictions related to the COVID-19 pandemic were eased. The rise was the fourth in as many months and the sharpest recorded since last November amid the strongest expansion in the services sector since October 2013, with firms relating the increase to the return of international visitors. Concurrently, manufacturers signalled the softest upturn in the current four-month growth sequence as COVID-19 restrictions in mainland China contributed to further supply chain disruption and exacerbated existing supply and demand pressures.

“Private sector firms also noted a further robust increase in prices in June. While the rate of input price inflation remained broadly similar to May’s series record, the slight easing in inflation was the first for five months and provided tentative evidence that the rise in input prices had peaked. That said, prices charged for Japanese goods and services rose at an unprecedented rate for the second successive month as higher material and staff cost burdens were partially passed through to customers.”

Eurozone PMIs and UK PMIs will be released in European session. ECB will publish monthly economic bulletin. Later in the day, US will release jobless claims, current account and PMIs. 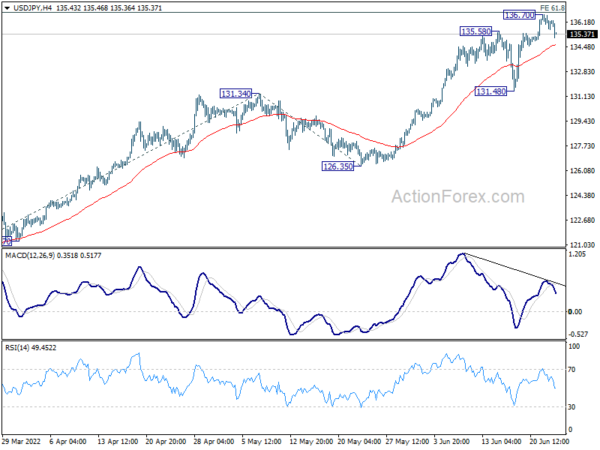 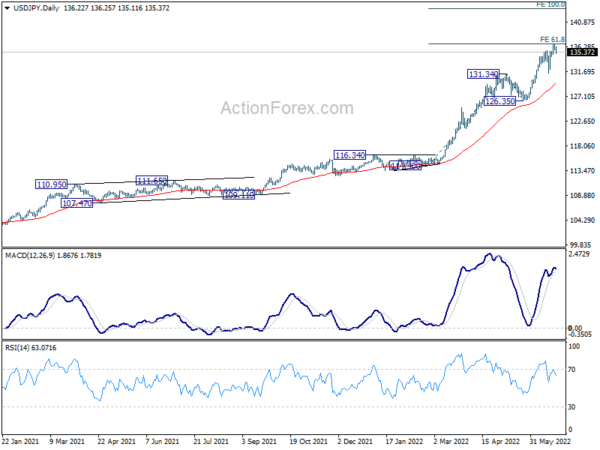