Swiss Franc is staying as the strongest one for today while markets are rather quiet elsewhere. Yen turns slightly weaker and US and European yields recover. But Dollar is also weak on overall steady sentiment. As for the week, however, Aussie and Kiwi are the worst performers, followed by Yen and Dollar. Swiss Franc and Sterling are the strongest ones.

ECB Centeno: Fragmentation has to be dealt with in their genesis

ECB Governing Council member Mario Centeno said the new instrument will “fight the risks of fragmentation” as monetary policy is gradually normalized. He emphasized that fragmentation has to be dealt with “in their genesis and not afterwards”.

The instrument “will certainly demonstrate the determination of the euro system and the council of governors in containing these risks”.

“There is no single typology of indicators to measure the materialization of fragmentation,” he added. “There is no goal regarding specific yield spread values”.

Ifo said: “Companies were somewhat less satisfied with their current business situation. Their expectations turned markedly more pessimistic. The threat of gas shortages is of great concern to the German economy.”

ONS said: “The fall in sales volumes over the month was because of food stores, which fell by 1.6%; reduced spending in food stores seems to be linked to the impact of rising food prices and the cost of living.”

Joe Staton, Client Strategy Director, GfK says: “With a headline score of -41 for June, the GfK Consumer Confidence Barometer has set a record low for the second successive month…. The consumer mood is currently darker than in the early stages of the Covid pandemic, the result of the 2016 Brexit referendum, and even the shock of the 2008 global financial crisis, and now there’s talk of a looming recession.”

BoJ Amamiya: Will continue to support the economy with monetary easing

BoJ Deputy Governor Masayoshi Amamiya said, “the BOJ will continue to support the economy with monetary easing to achieve its inflation target in a sustained, stable manner accompanied by wage rises.”

Amamiya also said the economy is picking up as a trend, but it’s facing “extremely high” uncertainty”. “Against this background, we must closely watch the impact financial and currency market moves could have on Japan’s economy and price,” he added.

But Deputy Chief Cabinet Secretary Seiji Kihara warned in the press conference, “we think it is necessary to pay close attention to the downside risks of the economy such as pushing down private consumption and corporate activities.”

USD/CHF’s fall from 1.0048 is seen as the third leg of the corrective pattern from 1.0063. Strong support should be seen at around 0.9543 to contain downside to bring rebound. On the upside, above 0.9731 minor resistance will turn bias back to the upside for retesting 1.0063 resistance. However, break of 0.9543 will bring deeper fall back to 0.9459 resistance turned support. 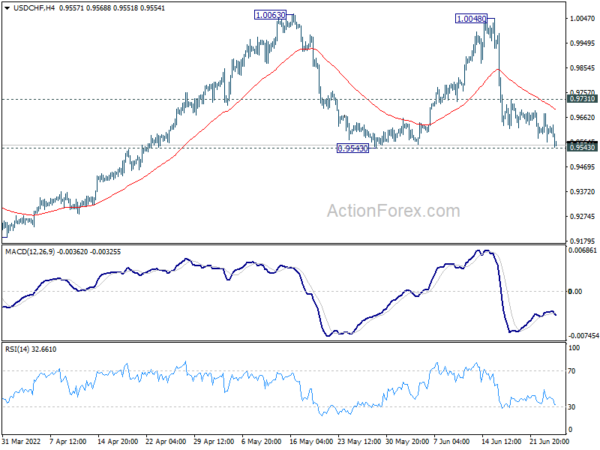 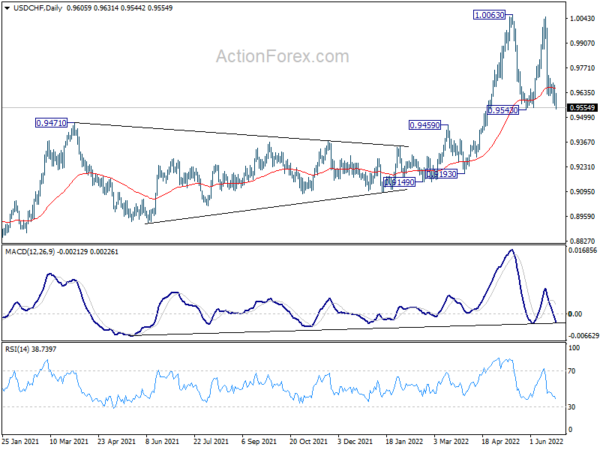