The forex markets are generally steady in Asian session today, as traders are still holding their bets ahead of Fed Chair Jerome Powell’s Jackson Hole speech. US stocks staged a rebound overnight, but there was little reaction elsewhere. For the week, commodity are currently the strongest, led by Aussie. European majors are the worst performers, led by Euro. Dollar and Yen are mixed.

Technically, 10-year yield breached 3.101 resistance this week but couldn’t sustain above there so far. Rejection by 3.101, followed by break of gap support at 2.952, will suggest that corrective pattern from 3.483 is already starting a third leg down towards 2.525 low. In this case, USD/JPY could be dragged down as a corresponding move. Nevertheless, firm break of 3.101 will send TNX towards 3.483, taking USD/JPY higher for a test on 139.37. 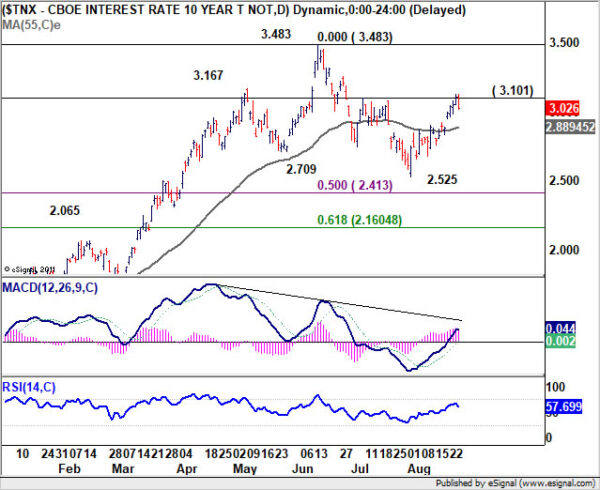 Fed Bullard: Front-loading rate hike could show you are serious about inflation fighting

St. Louis Fed President James Bullard reiterated he would like interest rate to be raised from current 2.25-2.50% to 3.75-4.00% by the end of the year. He added that “front-loading” these rate hikes could “show you are serious about inflation fighting.”

“A baseline would probably be that inflation will be more persistent than many on Wall Street expect, and that’s going to be higher for longer and that’s a risk that is underpriced in markets today,” Bullard added.

Kansas City Fed President Esther George told CNBC it’s “too soon to say” regarding September’s rate hike, “because we have some important data that’s coming up.”

“I don’t think we know yet where [the terminal rate for interest rates] may have to settle out, but it will be higher than it is today for sure,” she said.

“We still have high inflation. We saw some easing in the July numbers, but I think it remains broad-based, so there is more work to be done,” George said.

Fed Harker wants rate to get above 3.4%, open to higher

Philadelphia Fed President Patrick Harker told CNBC, “I’d like to see us get to, say, above 3.4% – that was the last median in the SEP (Summary of Economic Projections) – and then maybe sit for a while.”

Germany Gfk consumer sentiment and Eurozone M3 money supply will be released in European session. Later in the day, US will publish personal income and spending with PCE inflation, and goods trade balance.

Intraday bias in USD/CHF remains neutral at this point. Outlook is unchanged that triangle correction from 1.0063 could have completed at 0.9369 already. Above 0.9691 will resume the rise from 0.9369 and target 0.9884 resistance next. Break there will argue that larger up trend is ready for resumption through 1.0063. On the downside, below 0.9551 minor support will dampen this view and turn bias back to the downside for 0.9369 support instead. 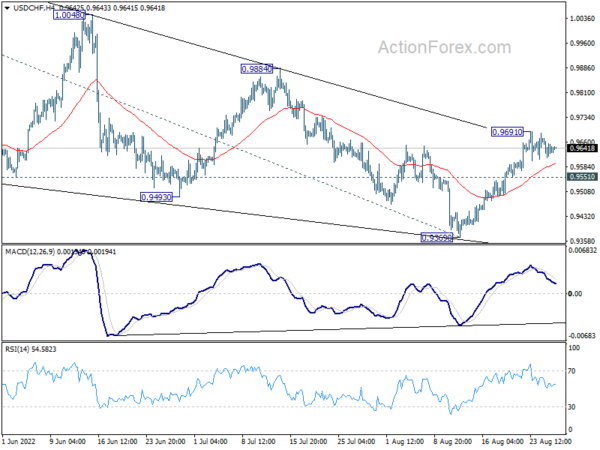 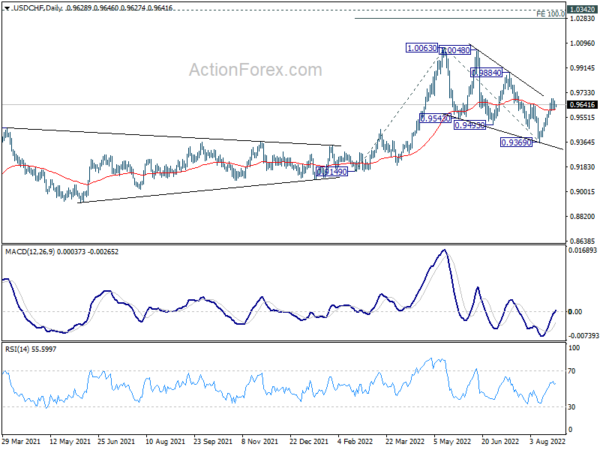