Euro is trying to extend recent rally, but the gains also so far concentrated against Sterling and Swiss Franc. Persistent flow of hawkish comments from ECB official is support the common currency nevertheless. Australian Dollar and Yen are currently the stronger ones for the day. The Pound, Franc and Dollar are the weaker ones.

Technically, EUR/CHF’s break of 0.9698 resistance should confirm short term bottoming at 0.9550, on bullish convergence condition in 4 hour MACD. EUR/GBP’s rally is continuing and break of 0.8585 resistance would set the stage for retesting 0.8720 high. However, EUR/USD is still struggling in established range of 0.9899/1.0094. Downside breakout remains in favor in EUR/USD, but let’s see. 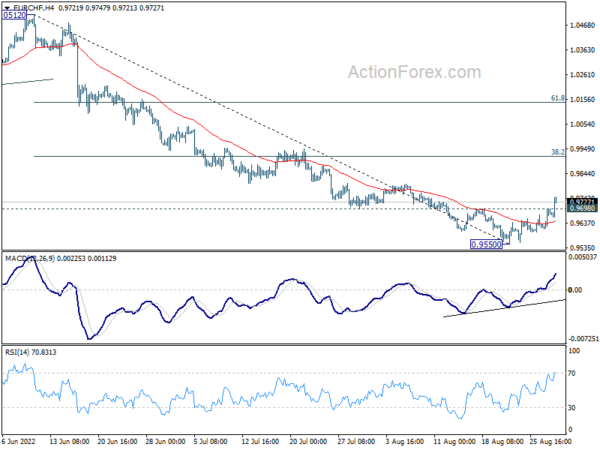 ECB Governing Council member Klaas Knot said, “a swift normalization of interest rates is an essential first phase, and some front-loading should not be excluded. The broadening and deepening of our inflation problem generates the need to act forcefully.”

Knot saw upside risks to inflation, including from higher food and energy prices, a weaker euro, copious budget spending and rising expectations. He added that even if the slowdown in the economy were to materialize, “this in itself is unlikely to bring inflation back to our objective over the medium term.”

Knot said earlier last week that a rate hike of at least 50bps is needed next week.

Swiss KOF Economic Barometer dropped from 90.5 to 86.5 in August, below expectation of 88.6. KOF said the reading is “quite considerably below its long-term average”. Accordingly, “for the near future the outlook for the Swiss economy appears less than encouraging.”

KOF added: ” The decline is primarily due to indicators broadly associated with private consumption, but the manufacturing sector and the construction industry are emitting negative signals, too. The other indicators included in the barometer show hardly any changes.”

EUR/GBP’s rise from 0.8338 continues today and the break of near term channel resistance is a sign of upside acceleration. Intraday bias stays on the upside for 0.8585 resistance first. Decisive break there should confirm that whole pattern from 0.8720 has completed, and bring further rally to retest this high. On the downside, below 0.8520 minor support will mix up the outlook and turn intraday bias neutral first. 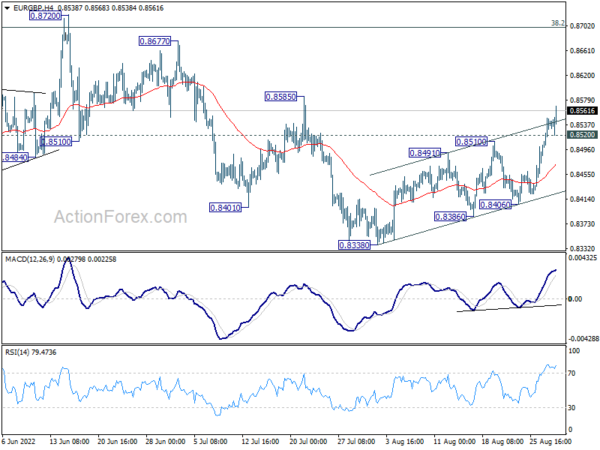 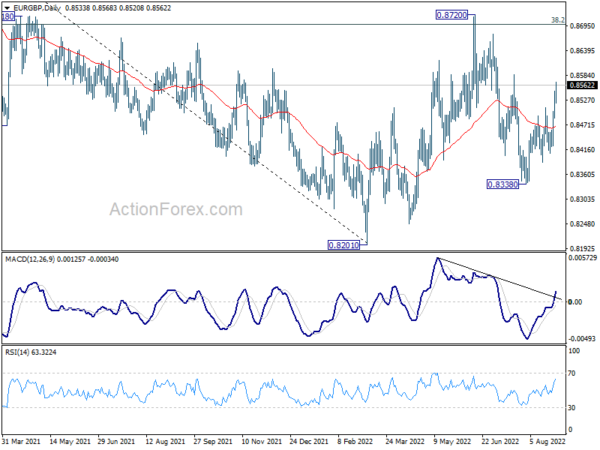