Dollar is losing some momentum but it’s still likely to end the week as the strongest one. The initial reactions for US President Donald Trump’s tax plan were positive. But markets quickly turned into cautious mode as they reassess the situation. DOW gained 0.18% to 22381.20 overnight, but stayed below 22419.51 record high made last week. S&P 500 ended at new record at 2510.06 by was kept below Thursday’s high as 2511.75. 10 Year yield opened sharply higher and jumped to as high as 2.344, but pared back all gains to close flat at 2.309. In the currency markets, commodity currencies are set to end as the weakest ones. Euro, Yen and Sterling could end the week mixed.

Based on the developments so far, the markets seem to be not totally convinced by Trump’s tax plan. There was lift to sentiments, but back then, the markets could have long given up. And, another change to 0% chance of Trump reflation trade is a boost. But there was no follow through buying seen so far as many questions remained unanswered. From trading/investing point of view, the key questions are whether the plan could go through Congress, and in speedy way. And, how much would the tax plan really help the economy?

Based on initially responses, there are already heavy criticisms on raising the lowest tax rate on individuals from 10% to 12%. And, at the same time, tax rate on high earners is lowered from 39.6% to 35% and corporates from 35% to 20%. That creates the impression that the plan is helping the riches rather than the poors and Democrats are in clear objection to it. Also, Trump’s ex-chief strategies Steve Bannon has been calling for raising the top tax rate to 44% and he pledged to batter the "establishment" Republicans on behalf of blue-collars. Trump could be facing a tough battle with his former ally. At the same time, the questions on funding the loss in tax revenue is unanswered yet, at least not satisfactorily answered. And there are questions on whether a cut in tax revenue would eventually lead to constraints in infrastructure spending.

More time is needed for the markets to digest these questions before taking a more decisive stance.

Summary of opinions in the September BoJ meeting showed that one policymaker called for expanding monetary stimulus. Meanwhile, all other nine-members were in consensus to maintain the current program. The dovish member was quoted saying that "it’s necessary to stimulate demand further with additional monetary easing to achieve and stabilize inflation at the BOJ’s target, given a scheduled sales tax hike in October 2019." The dissenting member was not named in the summary, but it’s rather clear that the meeting statement showed newcomer Goushi Kataoka dissented last time. And Kataoka is widely known as a dove that advocates aggressive easing. The summary also showed concerns over escalating tensions between US and North Korea. One member was quoted saying that "if geopolitical risks heighten further, the BOJ must be ready to consider taking necessary policy adjustments to prevent deflationary mindset from re-emerging."

Yesterday, Japan’s Prime Minister Shinzo Abe formally announced to dissolve the parliament before the snap election on October 22. He believed the high popularity of his Liberal Democratic Party (LDP) would secure him another term. However, the results are being far from certain. Polls showed that Tokyo Governor Yuriko Koike’s Party of Hope, only formally launched on Wednesday, has gained support of 18%, compared to LDP’s 29%. A merge between Party of Hope and Japan’s major opposition Democratic Party (Democratic Party has announced to run its candidates under Koike’s Party of Hope) would make this new party a real challenge to the incumbent.

Later in the day, US will release personal income and spending, as well as Chicago PMI. Canada will release GDP and IPPI/RMPI.

AUD/USD dipped to as low as 0.7798 but quickly drew support from 0.7807 key support level and recovered. Intraday bias is turned neutral first. Considering bearish divergence condition in daily MACD, firm break of 0.7807 will indicate near term reversal. Outlook will then be turned bearish for 55 week EMA (now at 0.7670) first. Meanwhile, rebound from 0.7807 will retain bullishness. Above 0.7938 minor resistance will turn bias back to the upside for retesting 0.8124 high. 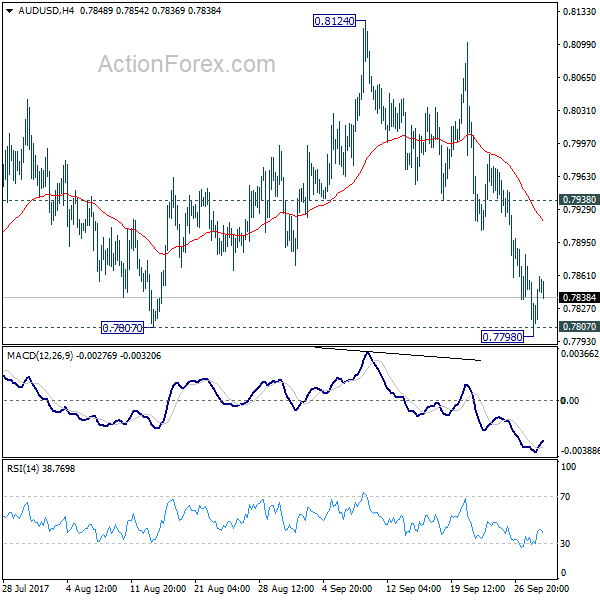 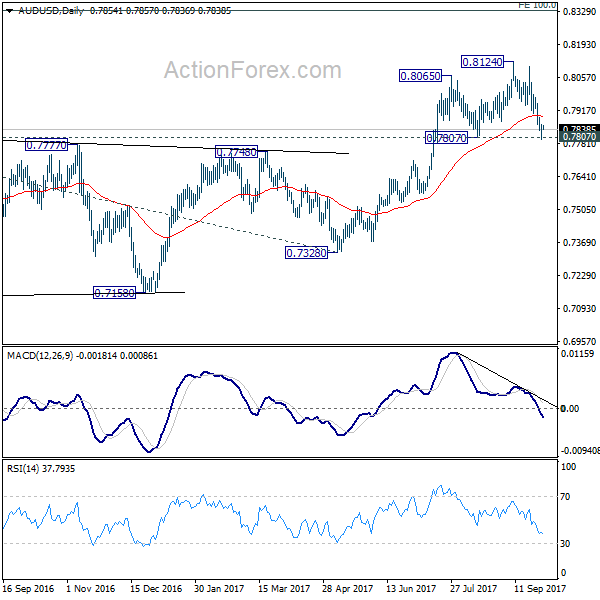