Dollar Rebounds, Yields Up, Stocks Down on US CPI

Dollar rebounds strongly in early US session after stronger than expected consumer inflation reading. 10-year yield jumps sharply and breaks above 3.4% handle DOW futures are down over -300 pts at the time of writing. The case for a 75bps hike by Fed is pretty much sealed. The question is whether markets will bet on more. For now, Aussie and Kiwi are the worst performer for today, but Yen is not too far away.

Technically, USD/JPY will come to spot light with a strong rebound. Firm break through 144.98 temporary top will resume larger up trend. But this time, it might not take other Yen crosses up. Instead, the upcoming session could be dominated by Dollar rally, in particular if risk aversion intensifies. 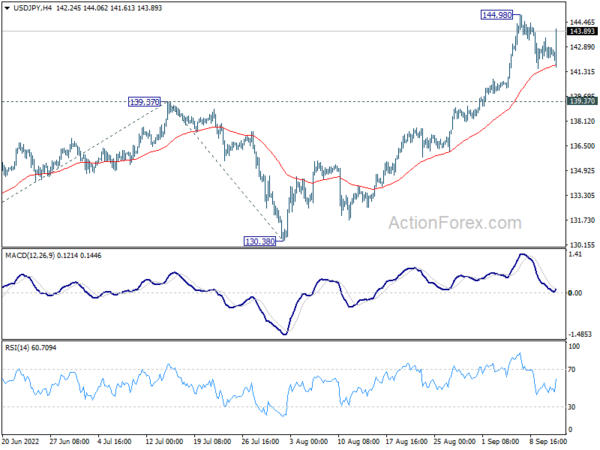 “The ZEW Indicator of Economic Sentiment decreased again in September. Together with the more negative assessment of the current situation, the outlook for the next six months has deteriorated further. The prospect of energy shortages in winter has made expectations even more negative for large parts of the German industry. In addition, growth in China is assessed less favourably. The latest statistical figures already show a decline in incoming orders, production, and exports,” comments ZEW President Professor Achim Wambach on current expectations.

UK payrolled employment rose 71k in Aug, unemployment rate down to 3.6% in Jul

“The recent strength in business conditions carried into August,” said NAB Group Chief Economist Alan Oster. “Official data for retail sales in July confirmed spending remained robust, as suggested by the previous survey, and today’s release shows little sign that August was much different. Conditions are strong across most industries other than construction, where profitability remains a challenge.”

“Confidence rose again in August, as did other forward indicators in the survey,” said Oster. “Confidence took a hit around June as interest rates first began to rise but it seems that firms’ initial concerns about the impact have eased and a more positive outlook is prevailing, at least for the time being.”

EUR/USD’s break of 1.0031 minor support argues that rebound from 0.9863 has completed at 1.1097 already. Rejection by 55 day EMA and channel resistance retains near term bearishness. Intraday bias is back on the downside for retesting 0.9863 low first. Firm break there will resume larger down trend. On the upside, sustained trading above 55 day EMA (now at 1.0169) raise the chance of larger trend reversal, and target 1.0368 resistance. 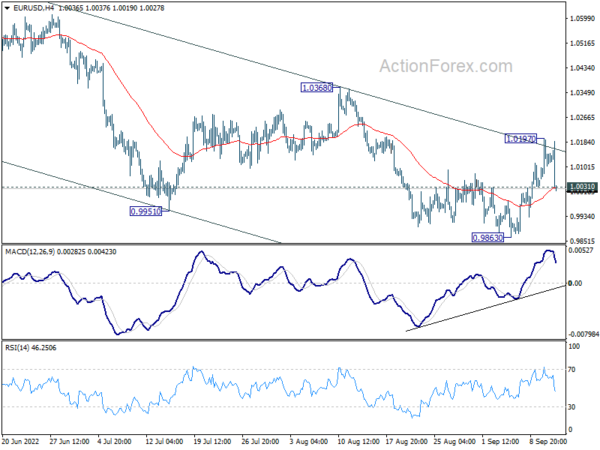 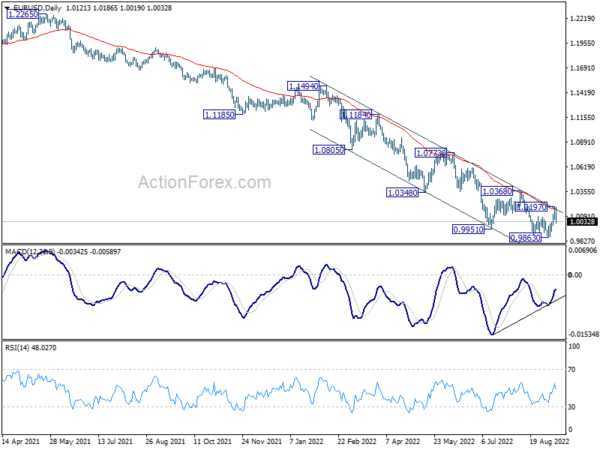