Dollar is lifted mildly after stronger than expected core PCE inflation reading. But overall markets are relatively quite in quarter-end trading. Sterling is still keeping its place as the strongest one for the week, but rebound appears to be losing some momentum. Euro is following as second, and then Swiss Franc. Yen is among the worst performers with commodity currencies. The question is whether risk aversion could give Dollar and Yen a lift in the final hours.

Technically, Euro’s rebound is also momentum as seen in both EUR/USD and EUR/JPY. There’s just isn’t enough follow through buying to push the pairs through 0.9863 and 142.28 resistance respectively. Rejection by these levels, followed by a reversal, will keep near term outlook bearish for another fall through this week’s lows, at a later stage. 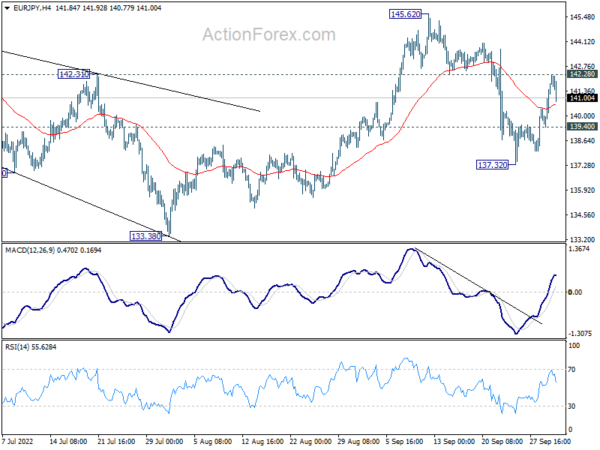 Swiss KOF edged up to 93.8, still augurs a cooling of economy

Swiss KOF Economic Barometer rose slightly from 93.5 to 93.8 in September, better than expectation of of 86.2. yet, the reading remains below its long-term average, “augurs a cooling of the Swiss economy for the end of 2022.”

The slight increase is “primarily attributable to bundles of indicators from the manufacturing and other services sectors”. On the other hand, “indicators from the finance and insurance sector and for foreign demand are sending negative signals.”

Also from Swiss, retail sales rose 3.0% yoy in August, above expectation of 2.8% yoy.

Japan industrial production rose 2.7% mom in August, much better than expectation of -0.2% decline. That’s also the third consecutive month of growth. The Ministry of Economy, Trade and Industry expects production to rise further by 2.9% mom in September and then 3.2% mom in October.

Senior NBS statistician Zhao Qinghe said, “In September, with a series of stimulus packages continuing to take effect, coupled with the impact of hot weather receding, the manufacturing boom has rebounded. The PMI returned to the expansionary range… [The non-manufacturing index] remained above the threshold, with the overall expansion of the non-manufacturing sector decelerating.”

On the other hand, Caixin PMI Manufacturing dropped from 49.5 to 48.1, below expectation of 49.9. Caixin said production fell for the first time in four months amid quicker dropped in sales. Firms cut back on purchasing activity and inventories. Selling prices fell at quickest rate since December 2015.

Intraday bias in EUR/USD remains neutral at this point, and outlook stays bearish with 0.9863 support turned resistance intact. Break of 0.9634 will suggest that larger down trend is ready to resume. Intraday bias will be back on the downside for 0.9534 and below. However, sustained break of 0.9863 will confirm short term bottoming, and bring stronger rally back to 1.0197 resistance instead. 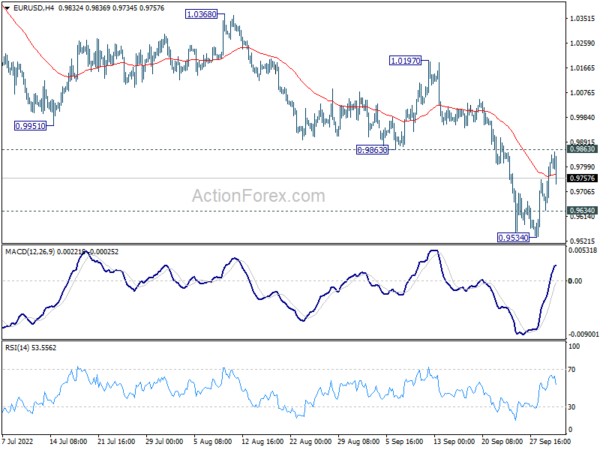 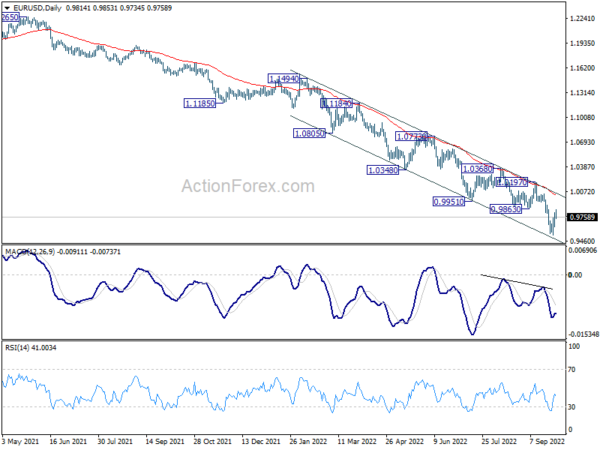