Euro recovers broadly today as markets are looking past the political turmoil in Spain, with focus back on ECB and economic outlook. European markets, except Spain, are steady with Germany on holiday. At the same time, thousands of people protest in Barcelona against police violence during the referendum on Catalonia independence on Sunday. The European parliament will be holding a special session on the issue tomorrow and European commission spokesman Margaritis Schinas urged that "violence can never be an instrument in politics". Elsewhere, Sterling is trading as one of the weakest one today after shockingly bad construction data. Dollar stays firm but struggles to find follow through buying.

UK PMI construction dropped sharply to 48.1 in September, down from 51.1 and missed expectation of 51.1. That’s also the lowest level in more than a year since July 2016. Markit noted that "a shortfall of new work to replace completed projects has started to weigh heavily on the UK construction sector." Also, "survey respondents widely commented on a headwind from political and economic uncertainty, alongside extended lead times for budget approvals among clients". And CIPS noted that ""Respondents pointed to obstructive economic conditions and the Brexit blight of uncertainty, freezing clients into indecision over new projects".

In the minutes of BoE’s September 20 Financial Policy Committee meeting, the central bank noted that "there remained a substantial risk of disruption of cross-border clearing activity" after Brexit. And therefore the central bank was "was continuing to engage financial market infrastructure and firms on their contingency planning." BoE pointed out that some clearing houses are looking at contingency plans like moving activities from UK. However, in some cases, "complexity and cost of any migration was significant" and it’s not an option.

RBA left the cash rate unchanged at 1.50% today. The accompanying statement contained few changes from the previous one. This perhaps explains the modest drop in Aussie after the release, as the market had expected a more hawkish message. The central bank is upbeat over the economic developments, hinging on the improving non-mining investment. Policymakers also acknowledged the strength in the job market, pointing to the rise in participation rate as well as a number of forward-looking indicators. Comments on the exchange rate were limited, with the central bank reiterating the impact of a strong Aussie on inflation, GDP growth and employment. We expect the central bank to keep the policy rate unchanged until 2H18. More in RBA Upbeat On Economic Growth, No Rush To Hike Rates.

In China, PBOC announced to adopt targeted RRR cut in 2018 in some banks to ‘encourage inclusive financing, such as credit support for small and micro-sized enterprises (SMEs), startups and agricultural production, as well as small business owners, impoverished groups and students. We believe the move is a fine-tuning of PBOC’s other tightening measures, rather than a shift towards a loosening monetary stance. Indeed, by choosing a targeted RRR cut, instead of a broad-based cut or a rate reduction, the central bank is sending a signal that it has not changed the monetary policy stance which remains ‘prudent and neutral". More in PBOC Announced Targeted RRR Cut, Just Fine-Tuning Of Monetary Policy.

GBP/USD’s fall from 1.3651 is still in progress and intraday bias remains on the downside. Current decline would extend to 61.8% retracement of 1.2773 to 1.3651 at 1.3108. On the upside, break of 1.3454 minor resistance is needed to signal completion of the decline. Otherwise, near term outlook remains mildly bearish in case of recovery. 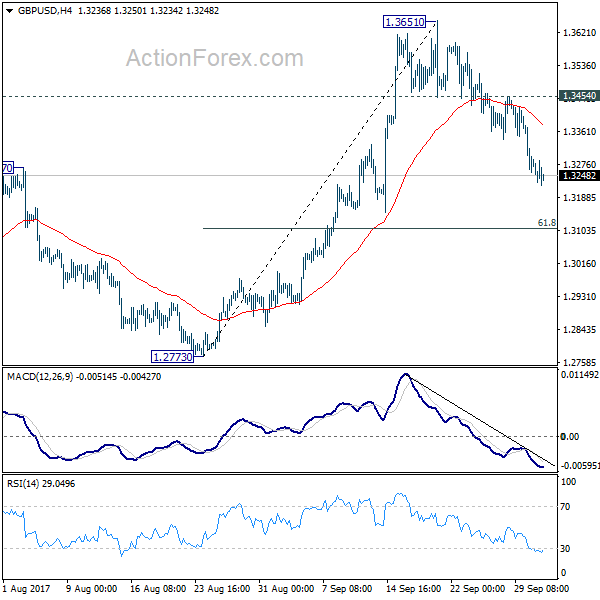 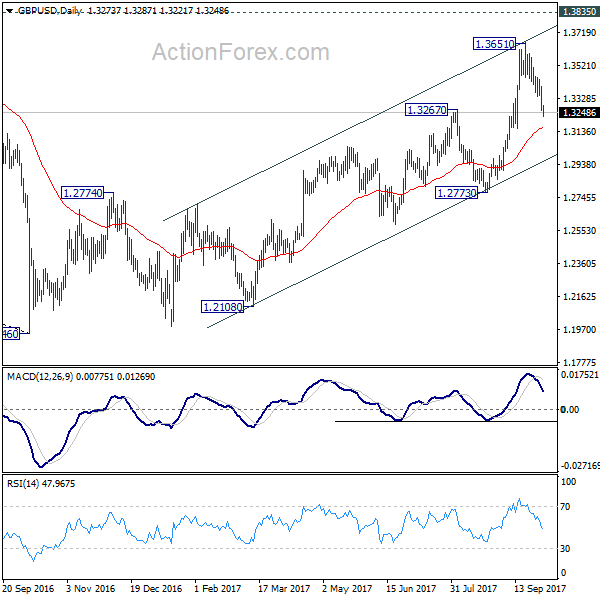