It’s reported that US President Donald Trumps’ advisers have finalized a shortlist of candidate to lead Fed after Janet Yellen’s term expires next year. While Yellen stays in the shortlist naturally, it’s very doubtful if she’s still be considered. Meanwhile, Trump’s chief economic advisor Gary Cohn, Fed Governor Jerome Powell and former Fed Governor Kevin Warsh are part of the shortlist. Yellen, Cohn, Powell and Warsh are believed to be interviewed by Trump last week already. Trump also indicated that he could make a decision in two or three weeks.

Members of the European Parliament voted to delay trade discussions with UK until there is a "major breakthrough" in the negotiation. The motion was backed by 557 MEPs, with 92 against and 29 abstained. While the vote was not binding, it did show the united stance among EU officials on the issue. And, some EU officials are clearly dissatisfied with the way UK is taking the negotiations. The Parliament’s chief Brexit spokesman Guy Verhofstadt blamed the open splits among UK officials for the of progress. He pointed out that "there are differences between Hammond and Fox… and Johnson and May."

UK Brexit Secretary David Davis said that they’re "ready for the alternative" should outcome of Brexit negotiation falls short of "the deal that Britain needs". And, "there is a determined exercise under way in Whitehall devoted to contingency arrangements so that we are ready for any outcome."

More than 15000 people protested in Barcelona yesterday, against the Spanish government’s violence on the disputed Catalonia independence referendum. 50 roads were blocked while most schools and small businesses were closed. The official result of Sunday’s referendum will presented to Catalonian parliament today or tomorrow. And a formal declaration of independence could be declared shortly after. European Parliament will discuss the situation today. Meanwhile, Spain’s King Felipe VI criticized that Catalan leaders have broken the law of the stat and showed and "inadmissable lack of loyalty."

Bank of Japan Deputy Governor Hiroshi Nakaso said that during the exit of monetary stimulus, the BoJ could incur "red ink". But he expressed his confidence that "short-term fluctuations in the BOJ’s revenues won’t disrupt our policy-making." And, the central bank could learn from Fed’s experience on tapering of quantitative easing. Meanwhile, Nakaso also urged the government to take a "balanced" approach on fiscal policies and emphasized that "it’s important to create a sustainable fiscal framework in Japan." This was seen as a response to Prime Minister Shinzo Abe’s plan to delay the target of reaching primary budget surplus by a few years.

UK BRC shop price dropped -0.1% yoy in September. UK services PMI will be a main focus in European session. Eurozone will release retial sales and services PMI final. From US, ADP employment and ISM services will be released.

Intraday bias in USD/CHF remains neutral as it struggled to take out 0.9772 firmly. And outlook remains unchanged. On the upside, decisive break of 0.9772 key resistance will suggest that whole down trend form 1.0342 has completed. In that case, near term outlook will be turned bullish for 0.9860/1.0099 resistance zone. However, break of 09669 minor support will suggest rejection from 09772 and turn bias back to the downside for 0.9587 support. Break will target retesting 0.9420 low. 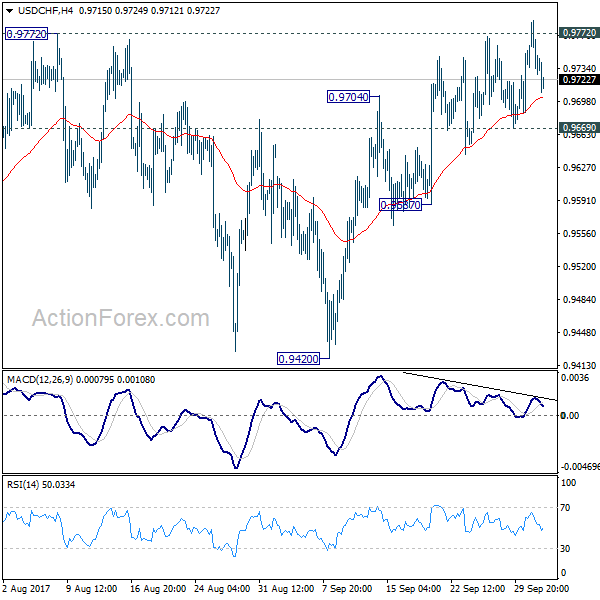 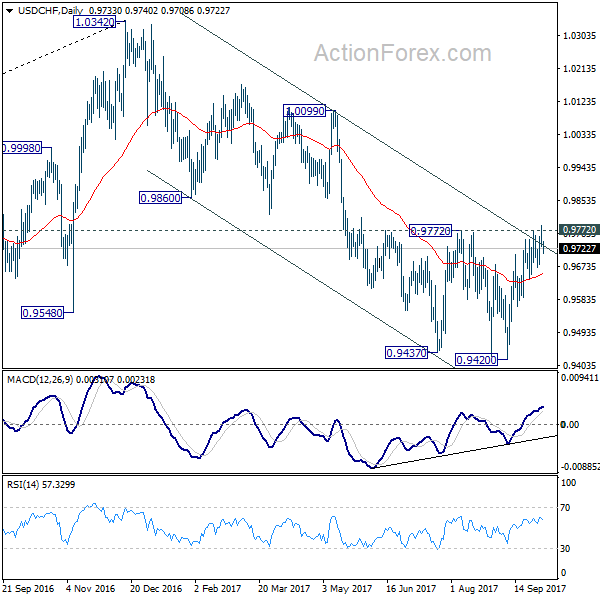