Dollar trades mildly firmer in Asian session today but there is still no follow through buying in listless trading. The greenback is still limited below key near term resistance levels against Swiss Franc, Yen and Aussie. While the Aussie trades mildly softer after weak retail sales, it’s staying as the strongest one for the week so far. Euro is attempting a rebound but the strength is limited by growing tensions in Catalonia. Meanwhile, Sterling was given some support after yesterday’s service data. But there is no sign of a sustainable rebound yet.

Fed Chair Janet Yellen said yesterday that the central bank is working on easing regulations on smaller banks. Yellen noted that "For community banks, which by and large avoided the risky business practices that contributed to the financial crisis, we have been focused on making sure that much-needed improvements to regulation and supervision since the crisis are appropriate and not unduly burdensome." Yellen has already talked a tough line defending post financial regulations. But there has been openness to softening the rules for community banks. And her comments were seen as a reminder to US President Donald Trump that there are rooms for discussions on easing business regulations. These comments come at a time when Trump is considering his short list of five candidates for the next Fed chair position.

Catalonia leader Carles Puigdemont accused King Felipe of Spain of endorsing the "catastrophic" policies of Spanish Prime Minister Mariano Rajoy. He said King Felipe "have disappointed a lot of Catalans". But he also emphasized that "this moment requires mediation". But such calls have so far fallen on deaf ears. Puidgemont is also clear that he would declare independence in the coming days.

European Commission Vice President Frans Timmermans, a Dutch politician, criticized that Catalonia for holding an illegal referendum. Timmermans said in the European Parliament that "there is a general consensus that the regional government of Catalonia has chosen to ignore the law." And, he added that "respect for the rule of law is not optional, it is fundamental." But he also urged that "all lines of communication must stay open. It’s time to talk, to find a way out of the impasse."

Guy Verhofstadt, a Belgian member of the European Parliament, who’s also the Brexit negotiation representative, talked about Catalonia yesterday. He branded the independence referendum and condemned its ‘deception and manipulation’. He also warned that any declaration of independence is "totally irresponsible" Manfred Weber, a German politician said "the EU has neither the will nor the right to intervene in a true liberal democracy such as Spain." But Weber warned that "who leaves Spain, leaves the European Union."

On the other hand, Greens group leader Ska Keller, another German politician, condemned that "this was massive police violence against people and that was beyond any proportionality. Violence so disproportionate cannot be justified. No buts and no excuses, whatever you think about the referendum,"

Australian Dollar trades mildly lower today after disappointing retail sales, that contracted -0.6% mom in August, much worse than expectation of 0.3% mom rise. That’s also the steepest decline in more than four years. Also, the contraction is broad-based, as sales dropped in every state and territory across the country. The sluggish sales is seen partly a result of poor wage growth in the job market, and partly due to high household debt level. Also from Australia, trade surplus widened to AUD 0.99B in August, above expectation of AUD 0.87B. Exports grew 1% to AUD 32.2B while imports were flat at AUD 31.2B. The trade data was somewhat also consistent with retail sales, suggesting weak domestic demand growth. That’s seen as one of the major reasons for RBA to stand pat while global central banks are exiting stimulus.

Staying in Australia, former RBA board member John Edwards warned that "very low interest rates at a time of firm economic expansion invite trouble." And, there is "too great a risk that the price of assets like houses and shares may get too far out of whack with what prove to be sustainable levels." Then he pointed to Australia 10 year bond year at around 2.6%, 1.1% above the cash rate. The long-term average premium sits at 0.8%. So, "there is perhaps some allowance for a rise in the cash rate over the ten years of the bond, but not much."

Japan Abe to meet US Trump on November 6

Japan Prime Minister Shinzo Abe held a telephone call with US President Donald Trump yesterday. Regarding North Korea, they both agreed that "dialogue for the purpose of dialogue was meaningless". Abe is expected to meet Trump in November, during the latter’s visit to Asia including China, the Philippines, South Korea and Vietnam between November 3-14. That’s also not long after Abe’s snap elections. The summit will be held on November 6 with focuses on North Korea and trade relations.

AUD/USD continues to stay in tight range above 0.7784 and intraday bias remains neutral first. Focus stays on 0.7807 key near term support. Considering bearish divergence condition in daily MACD, firm break of 0.7807 support will indicate near term reversal. Outlook will then be turned bearish for 55 week EMA (now at 0.7674) first. Meanwhile, rebound from 0.7807 will retain bullishness. Above 0.7907 minor resistance will turn bias back to the upside for retesting 0.8124 high. 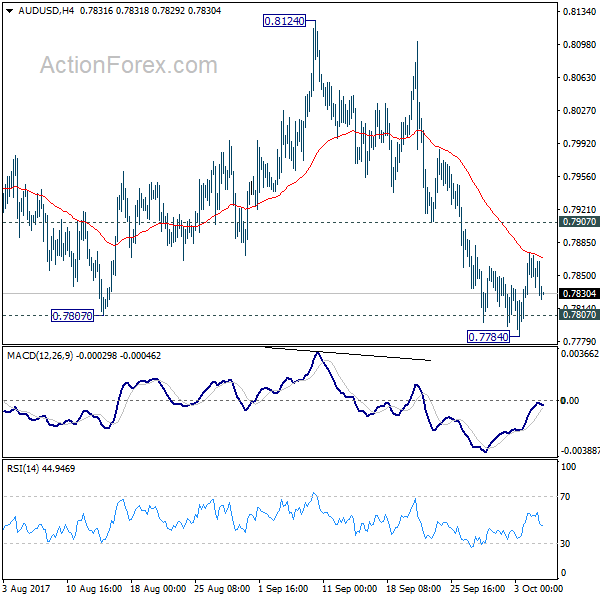 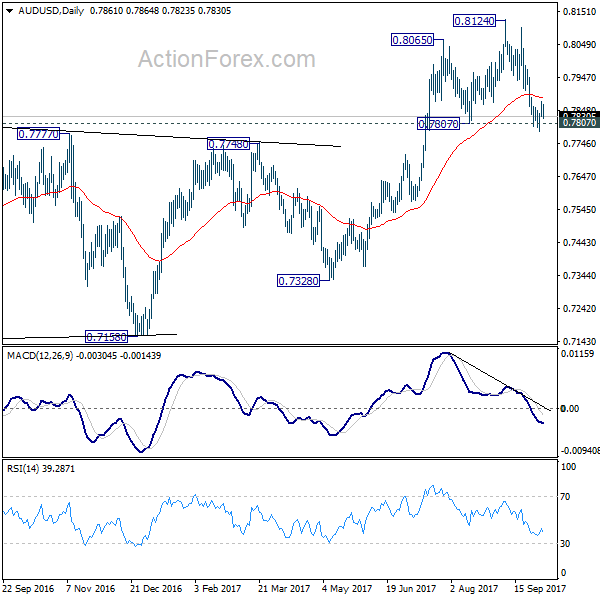