Fresh, broad based selling is seen in Sterling today and the currency staying as the weakest one for the week. Political uncertainty seems to be a main driver. Talks of UK Prime Minister Theresa May being ousted by her own party members surface. That comes after May’s keynote speech at the Conservative Party Conference yesterday. And the occasion was overshadowed by her coughing as a prankster storming the stage.

It’s reported that some Tory MPs want May to quit. However, the underlying split down the middle of the party is seen as the more serious problem. A clear representation of the division is the conflicting messages from ministers regarding UK’s Brexit position. And that leads to a lack of position which has been heavily criticized by EU officials.

Meanwhile, markets could be reassessing BoE outlook after a string of weaker than expected data released this week. This is no change in the expectation for BoE to hike in November. And, the central bank will continue to do so barring any disasters. However, a 25bps hike would just bring interest rate back to pre-Brexit referendum level. BoE will very likely stop there afterwards, until the Brexit picture becomes clearer.

The account of ECB’s September 6-7 monetary policy meeting showed that policymakers kicked start the discussion on adjustment of policies after the current asset purchase program ends in December. And, "a view was put forward that conditions were increasingly falling into place that would allow the intensity of monetary policy accommodation to be adapted and would provide an opportunity to scale back the Eurosystem’s net asset purchases."

The account also noted that there were discussions on "general trade-offs inherent in various scenarios for the future recalibration of the APP and, in particular, the choice between the pace and the intended duration." It added that,  "the benefits from a longer intended purchase horizon, combined with a greater reduction in the pace, were compared with those from a shorter period of purchases and larger monthly volume."

Still, the account emphasized that "any reassessment of the monetary policy stance should proceed in a very gradual and cautious manner, while maintaining sufficient flexibility." And there was "broad agreement" among ECB officials that substantial accommodation is still needed. Also, "discomfort was widely expressed about the very prolonged period over which inflation had been — and was still expected to remain — distant from the Governing Council’s aim."

Dollar is trading generally firm, except versus Yen. But there is still no follow through buying in the greenback yet. Traders seem to be holding their bets ahead of non-farm payroll report tomorrow. In addition, the lack of decision from US President Donald Trump on the next Fed chair could be rather unsettling. adding to that, there is no more news regarding Trump’s tax plan, which he targets to get through Congress by the end of the year. Release from US, initial jobless claims dropped 12K to 260K in the week ended September 30. Trade deficit narrowed to USD -42.4B in August. Canada trade deficit widened to USD -3.4B.

Yen is picking up momentum for a more sustainable rebound as traders are starting to turn cautious. And, volatility in Japanese financial markets is set to intensify as the snap election for the parliament (Lower House), scheduled on October 22, approaches. Our base case is that PM Shinzo Abe’s LDP would remain the biggest party. He would continue to be the leader of the LDP/Komeito coalition in the new term. However, the rapid rise of the new party Kibo no To (Party of Hope), led by Tokyo Governor Yuriko Koike, might result in a decrease in number of seats for LDP. This, together with the decline in Abe’s approval rating, has created much uncertainty in the upcoming election. More in Japan’s Snap Election And The Impacts On Policies.

Australian Dollar trades mildly lower today after disappointing retail sales, that contracted -0.6% mom in August, much worse than expectation of 0.3% mom rise. That’s also the steepest decline in more than four years. Also, the contraction is broad-based, as sales dropped in every state and territory across the country. The sluggish sales is seen partly a result of poor wage growth in the job market, and partly due to high household debt level. Also from Australia, trade surplus widened to AUD 0.99B in August, above expectation of AUD 0.87B. Exports grew 1% to AUD 32.2B while imports were flat at AUD 31.2B. The trade data was somewhat also consistent with retail sales, suggesting weak domestic demand growth. That’s seen as one of the major reasons for RBA to stand pat while global central banks are exiting stimulus.

Staying in Australia, former RBA board member John Edwards warned that "very low interest rates at a time of firm economic expansion invite trouble." And, there is "too great a risk that the price of assets like houses and shares may get too far out of whack with what prove to be sustainable levels." Then he pointed to Australia 10 year bond year at around 2.6%, 1.1% above the cash rate. The long-term average premium sits at 0.8%. So, "there is perhaps some allowance for a rise in the cash rate over the ten years of the bond, but not much." 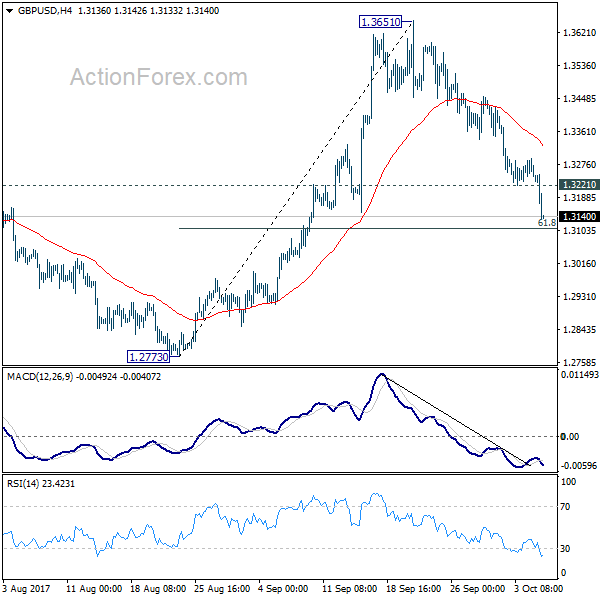 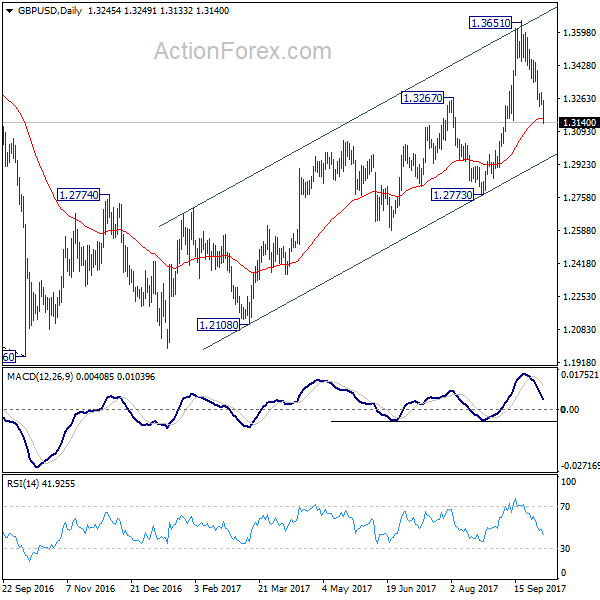