Fed is widely expected to hike federal funds rate by 25bps to 0.75-1.00%. The rate hike itself is well priced in. Thus the focus will be largely on three things, the FOMC statement, new economic projection, and Fed chair Janet Yellen’s press conference. Markets are looking through today’s hike and are eager to get the hints on what Fed would do next. The table below showed FOMC’s median projections back in December.

Federal funds rate are projected to be at 1.4% by the end of 2017, 2.1% by the end of 2018. They equivalent to 3 rate hikes in total for this year and 2-3 hikes next year. Any upward revision to the numbers will imply a faster path. In particular, some analysts are anticipating a meaningful revision to 2018’s projections to reflect a firmer chance of 3 hikes. Meanwhile, the markets will also look closely to the revisions to economic projections, with focuses on the core PCE number for this year and next.

Sterling recovers notably today after stronger than expected job data. ILO unemployment rate dropped to 4.7% in January, better than expectation of being unchanged at 4.8%. Also, that’s the lowest level in more than four decades since mid-1975. Employment rose 92k, and hit the highest level on record. However, was growth was disappointing as average weekly earnings rose 2.2% 3moy slowed from 2.6% 3moy and missed expectation of 2.4% 3moy. Meanwhile, claimant counts dropped -11.3k in February versus expectation of 3.2k rise. Claimant count rate was unchanged at 2.1%.

Strength in the Pound is relatively limited though as markets await FOMC rate decision today and then BoE rate decision tomorrow. At the mean time, traders are still awaiting UK prime minister Theresa May to finally trigger the Article 50 to kick start Brexit negotiation with EU.

The Dutch election held today is generally seen as a first gauge of spread of populism into Europe, ahead of elections in France and Germany. There have been voices from right-wing parties in the core of EU calling for anti-EU referendum. Meanwhile, the exact result of the election in the Netherland could be less important than the implications. The fractured political environment will certainly produce no majority in the parliament. And as many as five parties are possibly needed to form a coalition. Also from Europe, Swiss PPI dropped -0.2% mom rose 1.3% yoy in February. Eurozone employment rose 0.3% qoq in Q4.

BoJ monetary policy decisions will be the focus in the coming Asian session. The central bank is widely expected to keep interest rate unchanged at -0.1%. Also, it will maintain the Yield Curve Control framework to guide 10 year yield to around zero. With the YCC, BoJ will likely keep the pace of asset purchase at JPY 80T per annum. The announcement could end as a non-event.

GBP/USD formed a temporary low again at 1.2108 and recovered. Intraday bias is turned neutral for another round of consolidation. But still, outlook stays bearish as long as 1.2346 support turned resistance holds. As noted before, consolidation pattern from 1.1946 is completed at 1.2705 is resuming larger down trend. Below 1.2108 will target a test on 1.1946/86 support zone. Break of 1.1946 will confirm our bearish view. 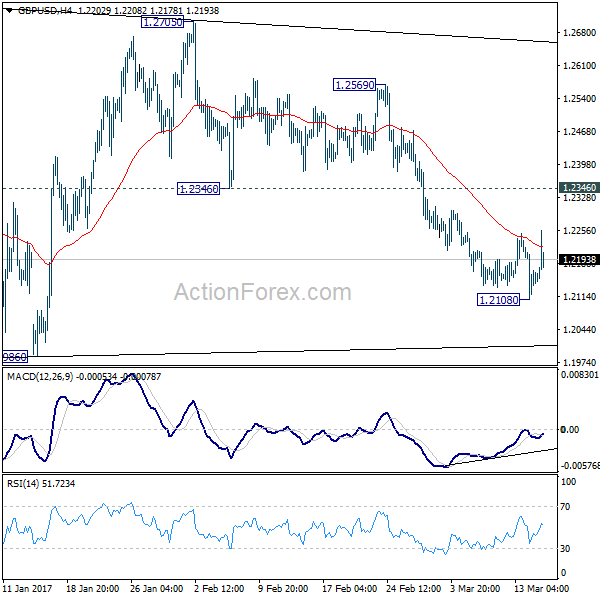 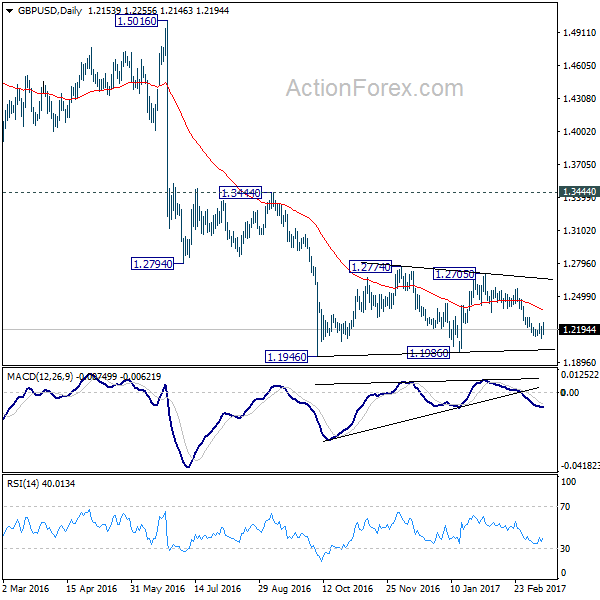