The financial markets have mixed, or probably just little reaction, to the outcome of the G20 meeting in Germany over the weekend. Markets in Australia, South Korea traded mildly lower. Meanwhile, stocks in Hong Kong jumped. Japan is on holiday today. In the currency markets, Sterling is paring back some of last week’s gain while Dollar stays generally weak. On the other hand, commodity currencies are trading broadly higher as led by Kiwi and Aussie. In other markets, Gold breaches last week’s high and is extending rebound to as high as 1235 so far. WTI crude oil dips back to 48.3 as last week’s recovery failed below 50. While RBNZ will meet this week, the main focus will turn back to economic data in most countries.

In the communique released by the G20 countries during the weekend, they dropped the pledged to "avoid all forms of protectionism." Instead, they toned down to a much tamer version of "working to strengthen the contribution of trade to our economies." This is seen as a response to the protectionist approach of US president Donald Trump’s administration. Yet, Trump didn’t get the pledge to ensure "fair" trade neither. Meanwhile G20 also dropped the pledge on climate change. Regarding global recovery, G20 noted that "the pace of growth is still weaker than desirable and downside risks for the global economy remain. We reaffirm our commitment to international economic and financial cooperation."

US Mnuchin: past communique not necessarily relevant

US trade secretary Steven Mnuchin described the meeting as "incredibly productive". And, he emphasized that "what was in the past communique is not necessarily relevant from my standpoint." He said that "I understand what the president’s desire is and his policies and I negotiated from there." He also said that the US believes in "free trade" but "we want to re-examine certain agreements".

French FM Sapin: there was disagreement within the G-20 between a country and all the others.

On the other hand, EU Economic Affairs Commissioner Pierre Moscovici said that "it is not the best meeting we’ve had, but we avoided backtracking." He hoped that "the wording will be different" at the July G20 meeting in Hamburg. German finance minister Wolfgang Schaeuble tried to talk down the changes and said it’s untrue that officials failed to find the common ground. And Schaeuble said that "it’s completely clear we are not for protectionism. But it wasn’t clear what one or another meant by that."

French finance minister Michel Sapin said that he regretted that the discussions "didn’t end in a satisfactory manner." But he noted that "there wasn’t a G-20 disagreement, there was disagreement within the G-20 between a country and all the others." Canadian finance minister Bill Morneau said that "the Americans were doing what any new administration would do — they were looking at the language through their lens." And, "their lens is: how can trade benefit the U.S.? Everyone else has the same lens, but every other country has the advantage of being at the previous meeting."

NZD/USD heading higher ahead of RBNZ

New Zealand dollar is trading high ahead of RBNZ rate decision later in the week. The central bank is widely expected to keep the OCR unchanged at 1.75%. Technically, NZD/USD formed a short term bottom at 0.6888 and rebounded strongly. The development argues that price actions from 0.7484 are merely forming a consolidation pattern. And that is, medium term rise from 0.6102 low is not completed yet. Further rise would now be seen back to 0.7128 near term resistance first. Break will pave the way for at least a test on 0.7374/7484 resistance zone. 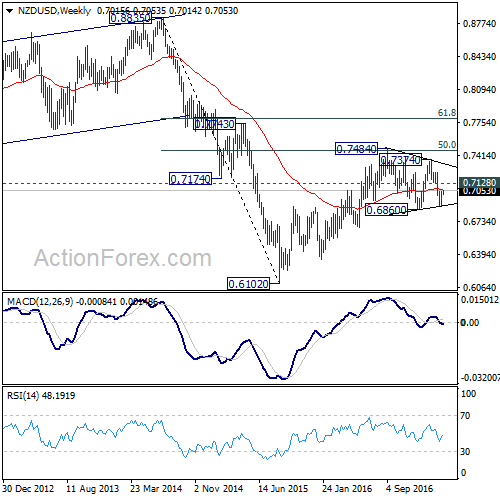 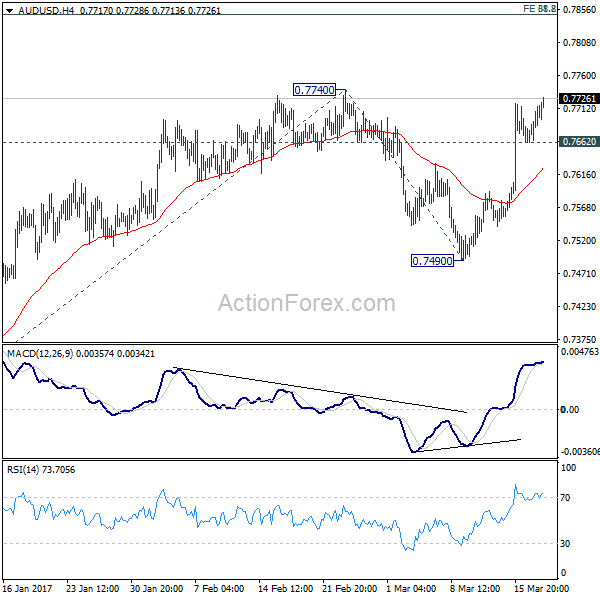 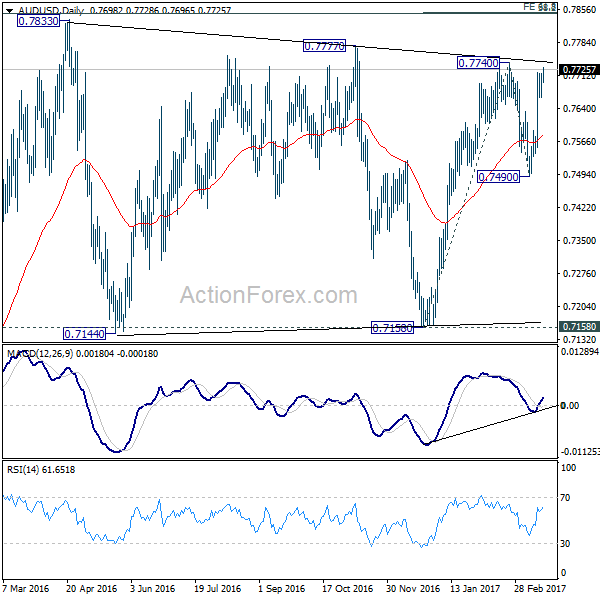