Sterling dips broadly today but loss is limited. UK Prime Minister Theresa May’s spokesman James Slack said that Article 50 on Brexit will be triggered next Wednesday on March 29. And, UK representative to EU Tim Barrow has already informed European Council President Donald Tusk of the plan. Slack also noted that "after we trigger, the 27 will agree their guidelines for negotiations and the Commission’s negotiating mandate." And, "President Tusk has said he expects an initial response within 48 hours. We want negotiations to start promptly." Meanwhile, it’s reported that UK and Germany are planning to sign a new defence pact after the trigger. German defence ministry confirmed that they are working on joint projects. And, the ministry emphasized that "independent of the effects of Brexit, Great Britain remains a strong partner and ally in Nato and also bilaterally."

Dollar is trying to recover in early US session but momentum is weak so far. Chicago Fed President Charles Evans sounded hawkish in his comments today. He noted that he support three rate hike this year if the economic outlook holds. Meanwhile, depending on the developments, he is open to more or less rate increases. That is, he is open to four rate hikes this year. Meanwhile, he expects the economy to growth at 2.25% clip his year.

ECB Visco: Could Shorten the time between QE end and rate hike

ECB governing council member Ignzaio Visco said that the time between end of asset purchase and rate hike "could" be shortened. He said that "I cannot say that QE is somehow coming to an end, and at the same time that interest rates are being maintained at a low level." And, "it is a package, not single measures — one by one — that we’ll discuss." But he emphasized that "the consistency between these various components is important," he said. "We have to be convinced that we are out of the low-inflation conditions that we have lived in in the last 3-4 years with one major consideration: that the risk of deflation seems to be really past." ECB governing council member Ewald Nowotny said last week that the central bank could raise interest rate before ending the quantitative easing program.

In the communique released by the G20 countries during the weekend, they dropped the pledged to "avoid all forms of protectionism." Instead, they toned down to a much tamer version of "working to strengthen the contribution of trade to our economies." This is seen as a response to the protectionist approach of US president Donald Trump’s administration. Yet, Trump didn’t get the pledge to ensure "fair" trade neither. Meanwhile G20 also dropped the pledge on climate change. Regarding global recovery, G20 noted that "the pace of growth is still weaker than desirable and downside risks for the global economy remain. We reaffirm our commitment to international economic and financial cooperation."

GBP/USD edged higher to 1.2435 today but lost momentum. Nonetheless, with 1.2308 minor support intact, intraday bias remains on the upside for 1.2569 resistance. Consolidation pattern from 1.1946 is extending with another rising leg. And the larger down trend is not ready to resume yet. Break of 1.2569 will target .2705/74 resistance zone next. At this point, we’d expect strong resistance from 1.2705/2774 to limit upside to extend the sideway pattern. Break of 1.2308 minor support will turn bias back to the downside for 1.2108 support. Though, sustained break of 1.2774 will extend the rise towards 1.3444 key resistance level. 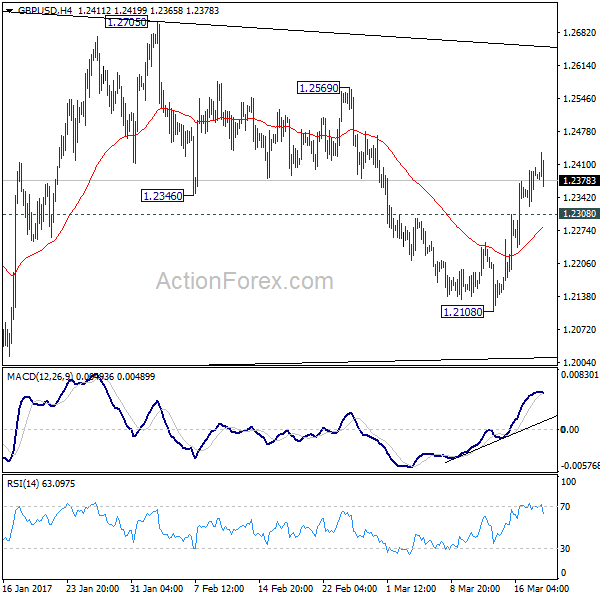 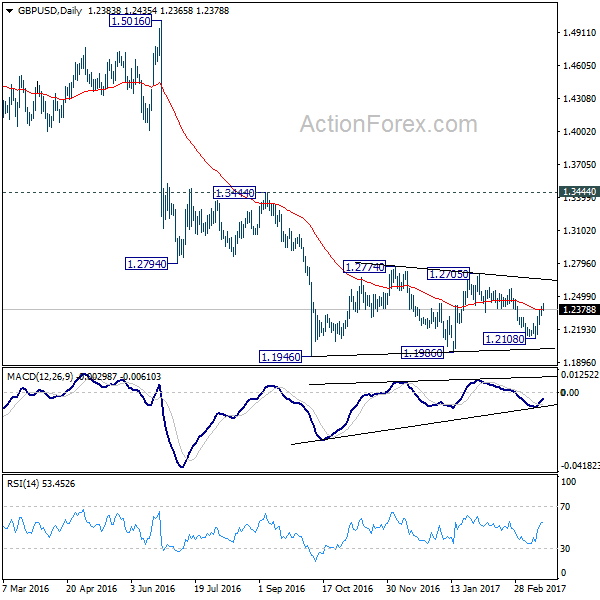