Australian dollar’s hit a four month high overnight but lost momentum after strong housing data and RBA minutes. RBA highlighted in the meeting minutes the risks from the heat-up housing markets. It noted that "data continued to suggest that there had been a build-up of risks associated with the housing market." And, "growth in household debt had been faster than that in household income."

Regarding the job markets, RBA said that "it was clear that spare capacity remained and there continued to be significant differences in labor market outcomes across the country." Also, "domestic wage pressures remained subdued and household income growth had been low, which, if it were to persist, would have implications for consumption growth and the risks posed by the level of household debt."

In UK, BoE chief economist Andy Haldane said that low interest rates could have hurt productivity. He pointed out that the "total factor productivity" had its longest stagnation in history since the financial crisis. And low interest rates had kept unproductive "zombie" businesses alive. Meanwhile, he emphasized the importance of free trade and foreign direct investment to UK. He noted that "for a foreign-owned (company), it’s twice as productive as domestically run firms. Higher exports, higher productivity – that screams from the data." And he hoped that "both of those features were preserved, ideally enhanced, in a post-Brexit world."

Talking about Brexit, UK Prime Minister Theresa May’s spokesman James Slack said that Article 50 on Brexit will be triggered next Wednesday on March 29. And, UK representative to EU Tim Barrow has already informed European Council President Donald Tusk of the plan. Slack also noted that "after we trigger, the 27 will agree their guidelines for negotiations and the Commission’s negotiating mandate." And, "President Tusk has said he expects an initial response within 48 hours. We want negotiations to start promptly."

Chicago Fed Evans: It could be three, two, or four hikes this year

In US, Chicago Fed President Charles Evans said Fed is on track for two more rate hike this year. Meanwhile, he maintained that a total of three hikes this year is "entirely possible". And, "as I gain more confidence in the outlook I could support three total this year. If inflation began to pick up, that would certainly solidify (that expectation). It could be three, it could be two, it could be four if things really pick up."

Minneapolis Federal Reserve President Neel Kashkari, the lone dissenter in last week’s FOMC meeting when FOMC hiked interest rate, spoke again yesterday. He reiterated that "when the data do call for removing some monetary accommodation, my preference would be that we … articulate a plan of exactly how and when we’re going to roll off the balance sheet." And, "as we move forward, we allow the balance sheet to start running off. Then we can return to fed funds rate hikes when the data call for it." And in short, his preference is "the balance sheet should be the next move."

Elsewhere, UK inflation data will be the main focus in European session. Headline CPI is expected jump to 2.1% yoy in February and core CPI is expected to rise to 1.7% yoy. RPI, PPI, house price index, public sector net borrowing will also be released from UK. Swiss will release trade balance. Later in US session, Canada will release retail sales while US will release Q4 current account. 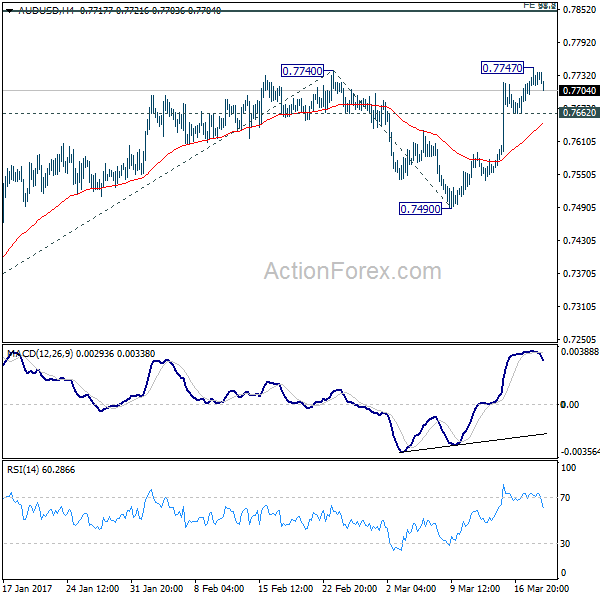 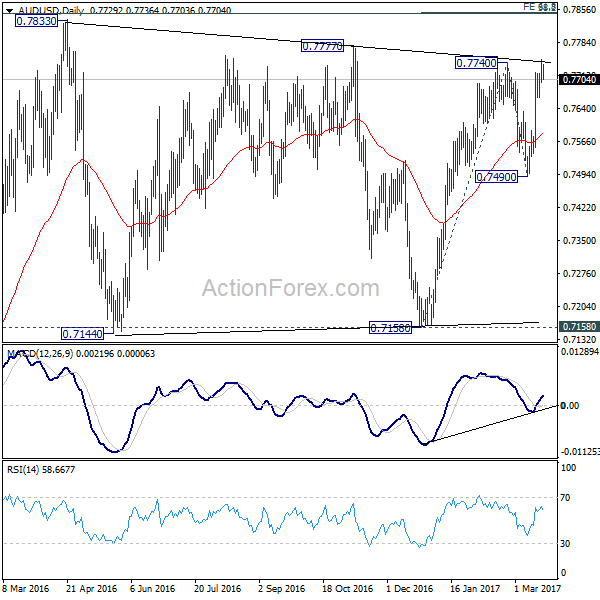