Global stock markets selloff continues today. At the time of writing, all major European indices are trading in red. FTSE 100 is down -1.9%, DAX down -2.4% and CAC 40 down -2.7%. DOW just had the biggest single day point drop yesterday. US futures suggest the selloff is going to continue, at least in the early part of today’s US session. In the currency markets, Dollar is trading broadly higher today, but overwhelmed by New Zealand Dollar. Yen follows closely as the third strongest today, but the strongest for the week. Notable weakness is seen in European majors.

German Chancellor Angela Merkel is still in overtime coalition negotiation with SPD today. Merkel said that "each of us will have to make painful compromises and I am ready for that." Specifically, she pointed to the "the movements on the stock markets over the last hours" and said "we live in turbulent times". Andreas Scheuer, secretary general of CSU said "we have to come to an agreement tonight. Anything else would be unreasonable for our citizens." SPD negotiator Carsten Schneider said a deal was close and "we have 90-95 percent".

BoJ Kuroda: Inappropriate to hike or even lift yield target

BoJ Governor Haruhiko Kuroda ruled out the possibility of an early hike today. He said that "Japanese inflation hasn’t even reached 1 percent. As such, it’s inappropriate to prematurely shift monetary policy just to create future policy space." He further added that "it’s inappropriate to raise our 10-year government bond yield target now, even by a small margin." Also Kuroda downplayed recent stock market routs and said the recovery in Japan, US and Europe is "broadening across sectors and the outlook remains good as a trend."

RBA maintained cash rate unchanged at 1.50%. The decision had been widely anticipated. As suggested in the accompanying statement, the central bank continued to see positive economic developments both globally and at home. Policymakers have turned slightly more upbeat over the domestic growth outlook, projecting GDP to expand ‘a bit above 3% over the next couple of years’. Meanwhile, RBA revealed that the central forecast for CPI is ‘a bit above 2% in 2018. This marks a more hawkish tone when compared with December’s language. While the job market has improved a lot, with the unemployment rate falling to the lowest level in 4.5 years, wage growth has remained lackluster. This has raised concerns over household expenditure. More in RBA Left Policy Rate At 1.5%, More Upbeat Over Growth And Inflation Outlook

GBP/USD’s decline accelerates to as low as 1.3835 today and breaks 1.3915 support. The development suggests that a short term top is at least formed at 1.4345 and deeper decline should be seen. Intraday bias is now on the downside for 1.3651 resistance turned support. For the moment, it’s unsure where the decline is corrective rise from 1.3038, or that from 1.1946, or it’s reversing the trend. Break of 1.3651 will turn to key fibonacci level at 1.3429. On the upside, above 1.3999 minor resistance will turn intraday bias neutral first. 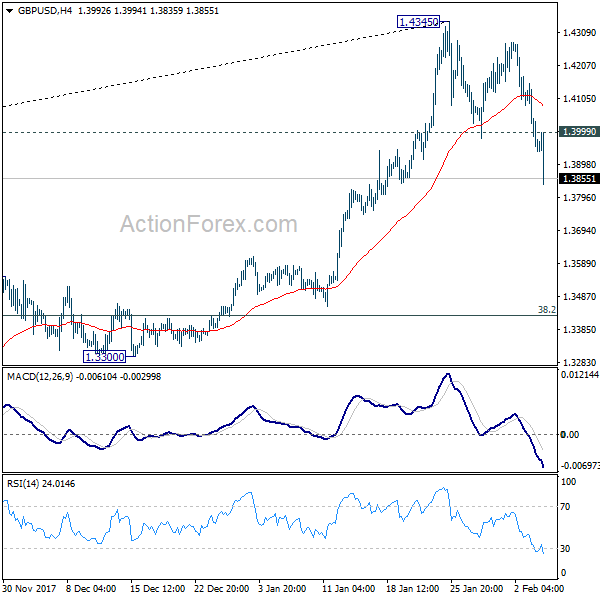 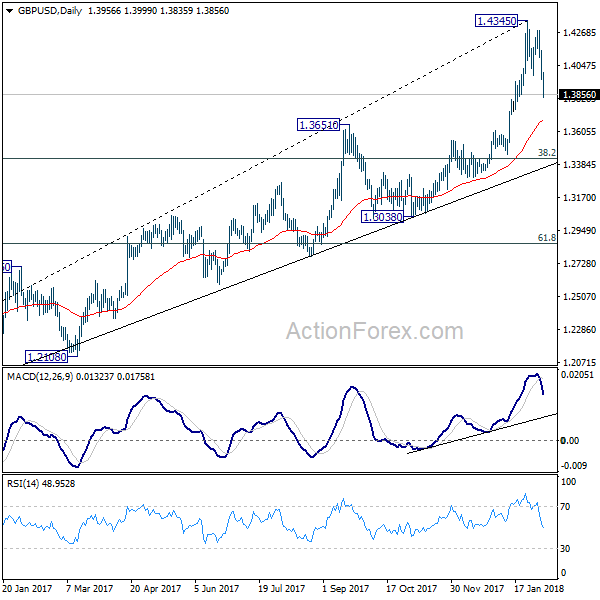