Euro drops sharply today, taking over Sterling as the weakest major currency for the week. The selloff in the common currency is triggered by reports that the markets have over-interpreted ECB’s message in the March meeting. Back than, there was a slight change in the language in the guidance. Markets took that as a sign that ECB is moving closer to stimulus exit. However, Reuters quoted unnamed source saying that policy makers merely wanted to communicate reduced tail risk. There were also talks that ECB could just lift interest rate back from negative to zero first. But another unnamed source described that as "communication nightmare" since markets would automatically price in a few hikes after rate is back to zero. Ad that would push the entire curve sharply higher. Meanwhile, another unnamed source was quoted that policy makers are not too worried about inflation as it has peaked for now with oil price down 10% from recent high.

More on ECB: No ECB Rate Hike or Tapering Until 2018

UK has finally submitted a formal request for exiting European Union today, triggering the Article 50 of the Lisbon Treaty. EU President Donald Tusk has confirmed receiving the request and tweeted that "after nine months, the UK has delivered". UK Prime Minster Theresa May said that "this is a historic moment from which there can be no turning back". But she emphasized to forge "a deep and special partnership" with EU. And she told the Parliament that "there should be no reason why we should not agree a new and special agreement between the UK and EU that works for all."

The Brexit request is widely expected and May has already announced the schedule. The question now is what comes next. It’s generally expected that EU leaders will take a tough stance in the negotiation considering the rise in euroskeptism, nationalism and populism in Europe in general. There are three main topics for negations including immigration, trade relationship and the cost of the "divorce".

At the same time the UK is now facing resurgence of Scottish independence risk. The Scottish Parliament approved a plan to request another independence referendum with 69-59 vote yesterday. And that could take place just before UK completes the Brexit process even though the timing was rejected by UK PM May. The British government’s Scottish secretary David Mundell said that the government "won’t be entering into any negotiation at all until the Brexit process is complete." That should refer to first half of 2019. But Scotland’s First Minister Nicola Sturgeon argued that by Autumn 2018, the details of Brexit agreement should be known.

Fed Vice Chair Stanley Fischer sounded hawkish in his interview by CNBC yesterday. He said that two more rate hikes "seems about right" for this year. He noted that it is "the sensible thing to do" to watch and wait White House’s fiscal policies which jumping the gun on the results. US President Donald Trump’s failure on health care act changed Fischer’s "internal calculus" but the the overall economic outlook. Separately, Fed Governor Jerome Powell said Fed is "getting closer" to achieving maximum employment. Inflation is "still a bit short, but not terribly short" of target. He reiterated that "it’s appropriate if we stay on this path for us to gradually raise interest rates."

In Canada, BoC Governor Stephen Poloz emphasized yesterday that the "correlation between economic progress and openness" is "striking". And, "when trade barriers are falling, when people are coming to our shores and when investment is rising, Canadians prosper." In response to the current protectionist approach of US Trump, Poloz warned that "protectionism does not promote growth and its costs are steep." Regarding immigration, Poloz said that Canada would have to rely entirely on immigration in less than 30 years to maintain population growth. And, "take away the force of international migration since Confederation, and Canada would be around 10 million people, not 36 million as we are today."

EUR/USD’s sharp fall and break of 1.0760 support today argues that rise from 1.0494 has completed at 1.0905 already. Meanwhile, the rise from 1.0339, a corrective move, is possibly finished too. Intraday bias is back on the downside for 55 day EMA (now at 1.0677) first. Sustained break there will affirm this view and target 1.0494 resistance for confirmation. On the upside, above 1.0826 minor resistance will indicate that the corrective rise from 1.0339 is still in progress. Intraday bias would then be flipped back to the upside for 1.0905 and above. 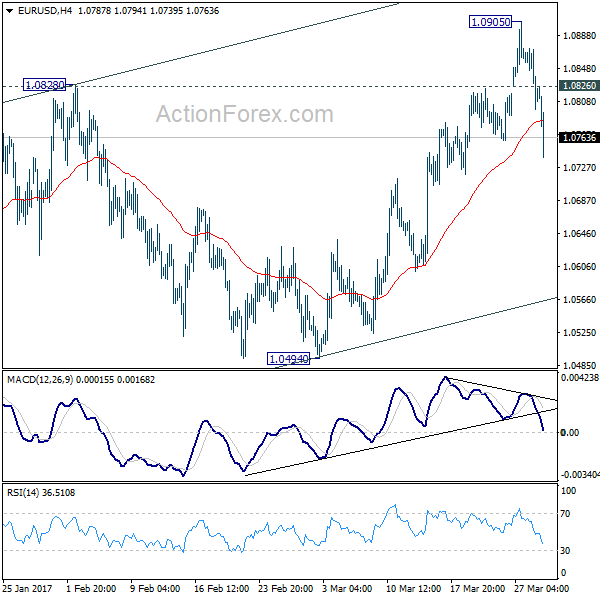 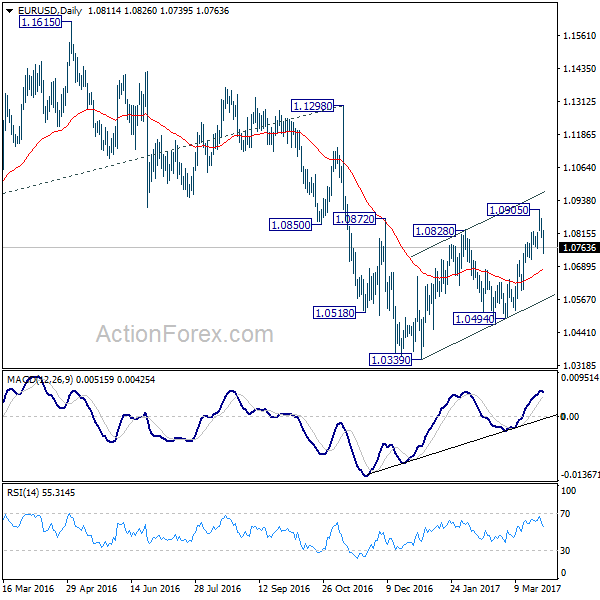