The forex markets remain generally in consolidation mode today. US President Donald Trump’s State of Union address provides little inspiration. Nonetheless, the soft tone of Dollar in Asian session suggests that it might be ready to resume recent decline, probably subject to FOMC statement. In other markets, DOW dropped -362 pts overnight to close at 26076.89. The index has likely started the long overdued near term correction and should head lower, possibly back to 25000 handle. 10 year yield extended recent rally to 2.726, up 0.030, but again, provides little support to Dollar.

BoJ Iwata: Some distance to 2% inflation

BoJ Deputy Governor Kikuo Iwata said today that the "powerful" monetary easing should be maintained. He noted "the economy is expanding moderately but prices remain weak." And, "there’s some distance to 2 percent inflation." And he called for "government steps, as well as appropriate monetary policy, are necessary to achieve price stability with sustained economic growth." BoJ released summary of opinions from the January meeting. One member said that recent surge in market expectation of stimulus exit would be "undesirable".

Australia CPI accelerated to 1.9% yoy in Q4, up fro Q3’s 1.8 yoy. However, this came in weaker than expectations of 2.0% yoy. On RBA’s other inflation measures, the trimmed mean CPI stayed unchanged at 1.8%, missing consensus of 1.9%. The weighted median CPI rose to 2.0% from 1.9% in the third quarter. This exceeded expectations of 1.9%. The set of inflation data gives no pressure for RBA to hike any time soon. And indeed, recent rally in Aussie’s exchange rate could give some downward pressure to inflation in near term ahead. And, there is still a lack of evidence of pick up in wage growth. Aussie weakens mildly after the release.

From China, official manufacturing PMI slipped -0.3 point to 51.3 in January, comparing to consensus of 51.5. Non-manufacturing PMI added 0.3 point to 55.3, beating expectations of 55. Note the government’s PMI estimates cover large corporations while the one compiled by Caixin/ Markit covers medium to small firms. Traders should interpret China’s economic data with caution as the accuracy is under question. HSBC complained about the country’s lack of transparency and withdrew from being the partner of Markit in compilation of China’s PMI data in 2015. Meanwhile, several provincial and local governments including Inner Mongolia and Tianjin have admitted exaggerating the economic data earlier this month.

British pound resumed strength as BOE Governor Mark sent some hawkish messages. As he suggested, "as slack in the economy has been taken out, we’ve moved into a more conventional area for monetary policy where the focus is increasingly on returning inflation sustainably to target over an appropriate horizon".

FOMC rate decision is the main focus of the day. While it is widely expected that no change would be made in the monetary policy, the market focus is on the Fed’s economic outlook and whether there are hints on the rate hike path. Notwithstanding the fact that inflation has remained soft, the robust employment market, with unemployment rate below the Fed’s long-term target, should have anchored the Fed’s confidence over the economic outlook. We do expect the Fed to address the issue recent USD weakness. On the monetary policy outlook, the market continued to price in over 70% of a rate hike in March.

USD/JPY continues to stay in consolidation above 108.27 temporary low. Intraday bias remains neutral for the moment. As long as 110.18 resistance holds, deeper decline is expected. On the downside, break of 108.27 will extend recent fall through 107.31 support to next fibonacci support at 106.48. Nonetheless, break of 110.18 will be the first sign of near term reversal and will turn bias back to the upside for 111.47 resistance. 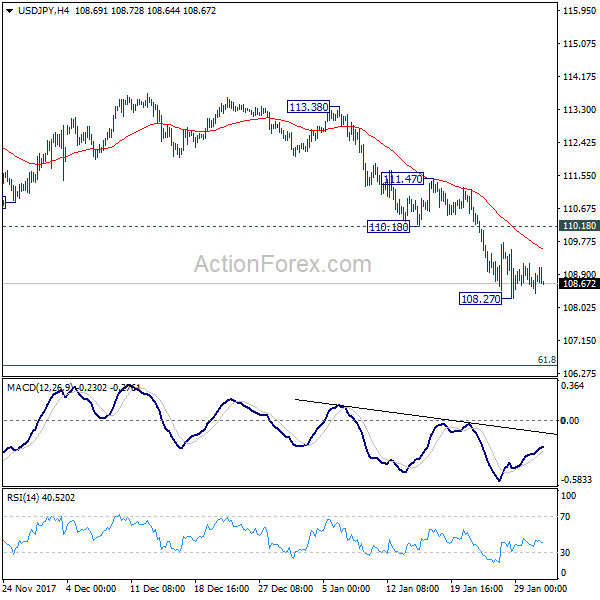 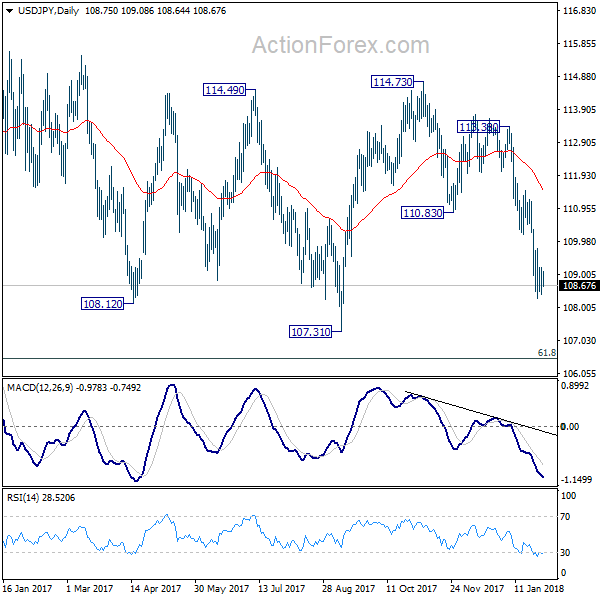