Canadian Dollar suffers steep selling today as US President Donald Trump singles out Canada and Mexico in his trade war rhetorics. He said in a tweet that “NAFTA, which is under renegotiation right now, has been a bad deal for U.S.A. Massive relocation of companies & jobs.” And, “tariffs on Steel and Aluminum will only come off if new & fair NAFTA agreement is signed.” It should be noted that again that Canada (16%) and Mexico (9%) were the first and fourth steel importers to US in 2017. Technically, USD/CAD took out a key resistance level at 1.2919 and which confirmed resumption of medium term rise from 1.2061.

Released from US, ISM non-manufacturing composite dropped to 59.9, down from 59.9 but beat expectation of 59.0.

UK PMI services: May BoE hike very much in place

Pound regains some footing today as supported by services data. UK PMI services rose to 54.5 in February, up from 53.0 and beat expectation of 53.3. Markit noted in the release that “business activity rises at fastest pace for four months” with “strongest upturn in new work since May 2017”. Chief Business Economist Chris Williamson said that “the service sector overtook manufacturing as the fastest growing part of the economy for only the second time since the referendum in February, thanks to the combination of the largest rise in services activity for four months and waning growth of factory output.”

Regarding interest rate outlook, Williamson noted that “with Bank of England policymakers sounding hawkish even following the January fall in the PMI to a one-and-a-half year low, the February upturn in the surveys surely leaves a May rate hike very much in play. The Bank seems keen to normalize interest rates even if output growth is below levels it would usually like to see when tightening policy.”

Eurozone Sentix: Economic turnaround is in the air

Euro is also firm, after initial selling. Eurozone Sentix investor confidence dropped to 24.0 in March, down from 31.9, much worse than expectation of 30.9. Sentix noted the index “fell significantly” and “expectations are clearly losing ground. “Deterioration in Germany” is one of the main reasons. And, “international environment is also deteriorating.” In particular, “the US expectations are close to zero. Trump’s comments on punitive tariffs give investors a great deal of thought.” Sentix warned that “an economic turnaround is in the air!”

Also from Eurozone, retail sales dropped -0.1% mom in January. PMI services was revised down to 56.2 in February, from initial reading of 56.7.

RBA rate decision is the main focus in the upcoming Asian session. RBA is widely expected to keep interest rate unchanged at 0.50%. Governor Philip Lowe and other policymakers have been clear in their neutral stance. RBA is not going to follow other global central banks for tightening. NAB recently adjusted their expectation to just one RBA hike this year, not two. Westpac maintained their forecast that RBA will be on hold throughout this year.

USD/CAD surges to as high as 1.2988 today and the firm break of 1.2919 resistance confirms resumption of whole medium term rise from 1.2061. Intraday bias is back on the upside for 1.3065 fibonacci level next. On the downside, below 1.2888 minor support will turn intraday bias neutral first. But outlook will now stay bullish as long as 1.2757 resistance turned support holds. 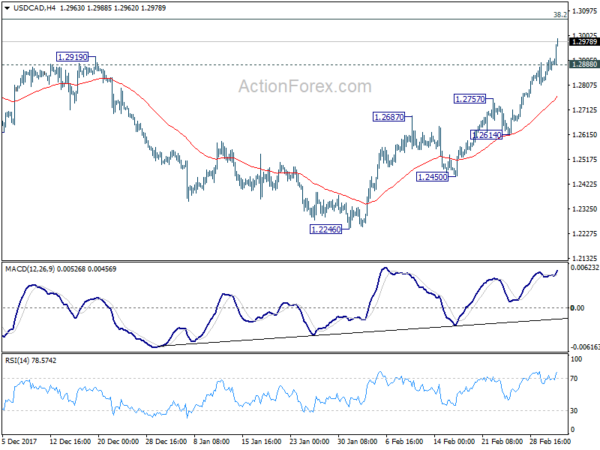 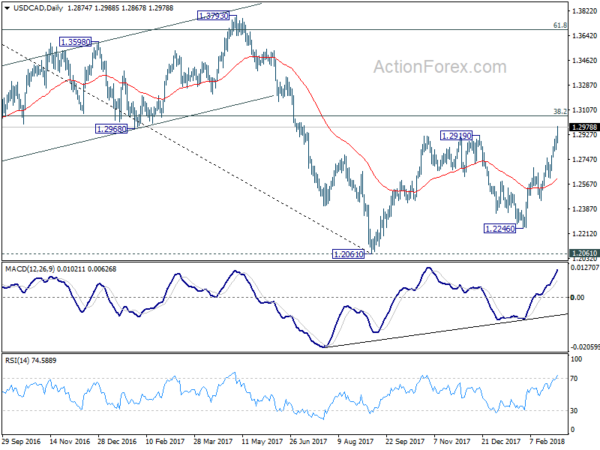