Risk appetite returned overnight with financial sector leading stocks higher. The surge in WTI crude oil through 50 handle also boosted overall sentiments. DJIA closed up 0.33% at 20728.94 and would be testing 20757.89 near term resistance today. NASDAQ has indeed closed at new record high at 5914.34, up 0.28%. But the sentiments didn’t carry on in Asian session as Nikkei closed down -0.81% at 18909.26, below 19000 handle again. Dollar index is back above 100 handle and broke near term resistance at 100.48, indicating the possibility of reversal. In the currency markets, Aussie and Canadian Dollar are leading the way up for the week on risk appetite, followed by Dollar. Meanwhile, European majors are generally weak with Euro setting to close as the weakest one.

In US, New York Fed President William Dudley said that federal funds rate remains "unusually low". And, "it seems appropriate to scale back monetary policy accommodation gradually in order to reduce the risk of the economy overheating," and, "to avoid a significant inflation overshoot in the medium term." Also Dudley noted that the economic outlook abroad has "brightened" with risks "significantly lower than they were a year ago." On the other hand, Dallas Fed President Robert Kaplan continued to sound cautious. He noted that US is "finally in a situation where the consumer capacity to spend is in pretty good shape." But, he’s "frankly more worried about and watching to make sure we don’t enact policies or some uncertainty that might cause consumers to take a little pause." Three rate hike this year is still Kaplan’s "base case".

US Transportation Secretary Elaine Chao indicated that the government would roll out USD 1T infrastructure plan later this year. Without offering further details, Chao suggested that plan would include "a strategic, targeted program of investment valued at USD 1T over 10 years. The proposal will cover more than transportation infrastructure, it will include energy, water and potentially broadband and veterans hospitals as well". But again, it should be noted that there is no detail about the plan yet. And US president Donald Trump’s failure in health care act raised much doubts on his ability to push through his economic agendas. Such doubts are still remaining in investors’ minds.

European Council President Donald Tusk will issue draft guidelines on negotiation with UK on Brexit. The guidelines are expected to set the tone for the negotiations which could last for two years. And such proposals will be sent to the governments of the 27 EU members today. It’s reported that the initial phase of the negotiation will center mainly on the terms of separation. The second phase will be on future trade relationship. Meanwhile, the third phase be on the transition between the relationship.

In UK, a policy paper "the Great Repeal Bill" was published yesterday to set out the government’s proposals for ensuring a functioning statute book once we have left the EU". Around 12000 EU regulations are in force in UK and around 7900 statutory instruments have implemented EU directives. There is a huge scale of tasks for legislators to work on. Brexit Secretary David Davis said that "it will mean that as we exit the EU and seek a new deep and special partnership with the European Union, we will be doing so from a position where we have the same standards and rules".

Japan data not too encouraging

In Japan, national CPI core rose 0.2% yoy in February, meeting expectations. This is also the first back to back increase in CPI since late 2015. However, it should be noted that Tokyo CPI dropped -0.4% yoy in March, worse than February’s -0.3% yoy and missed expectation of -0.2% yoy. Unemployment rate dropped to 2.8% in February, lowest since 1994. Household spending dropped -3.8% yoy in February,below expectation of -1.6% yoy. Industrial production rose 2.0% mom in February, above expectation of 1.2% mom. Housing starts dropped -2.6% yoy. All in all, the set of data from Japan is not too encouraging.

A major focus today is Eurozone CPI which might miss market expectation and give Euro some pressure. UK will release GDP, current account and index of services. Canada will release GDP later in the day. US will release PCE and Chicago PMI

The rebound from 110.10 continues today and break of 111.57 minor resistance indicates short term bottoming, on bullish convergence condition in 4 hour MACD. Intraday bias is back on the upside for 55 day EMA (now at 112.91). Sustained break there will raise the chance of near term reversal and target 115.49 resistance for confirmation. On the downside, though, below 110.99 minor support will turn bias back to the downside for 110.10 and break will extend the corrective fall from 118.65. 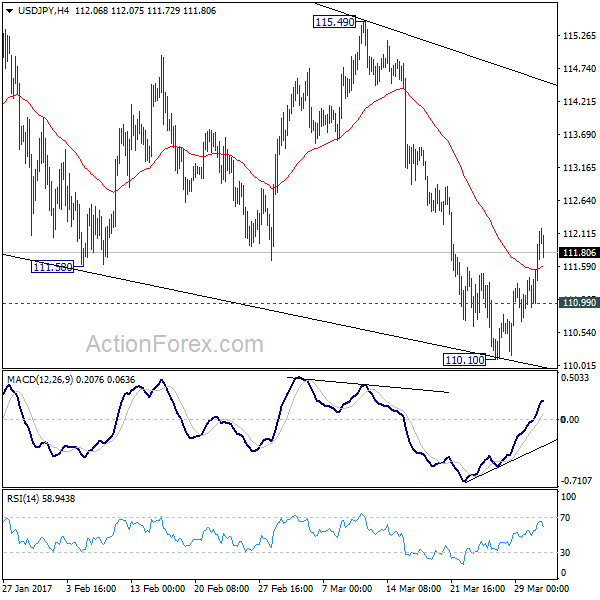 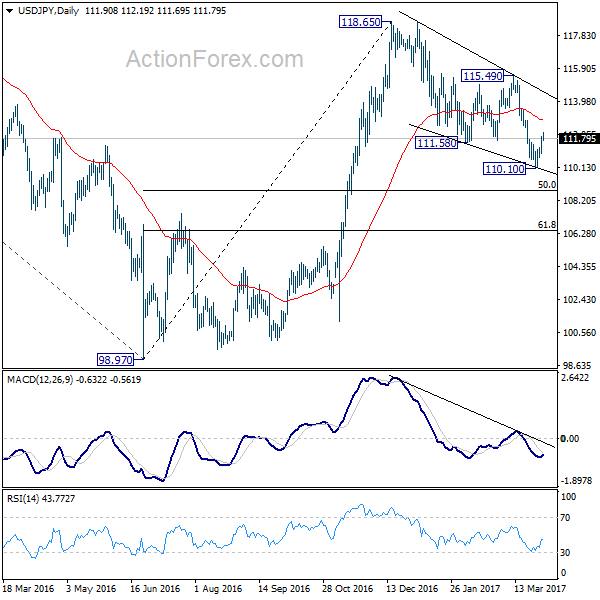