Dollar suffers broad based selling in early US session as in-line with expectation CPI data is a relieve to market participants. Additional, the greenback is weighed down by political turmoil in the White House. Headline CPI accelerated to 2.2% yoy in February, up from 2.1% yoy and met expectation. Core CPI was unchanged at 1.8% yoy, also met expectation. The data will not change Fed’s path to hike in March, likely in June too. But it doesn’t give Fed any support to hike the fourth time in December.

Separately, it’s reported that US Secretary of State Rex Tillerson is fired by President Donald Trump after clashes. Trump confirmed by tweeting “Mike Pompeo, Director of the CIA, will become our new Secretary of State. He will do a fantastic job! Thank you to Rex Tillerson for his service! Gina Haspel will become the new Director of the CIA, and the first woman so chosen. Congratulations to all!”

In Eurozone, ECB Governing Council member Philip Lane expressed his optimism that ” our confidence that inflation will converge to the target over the medium term improves.” While there are always talks of ECB stimulus exit in the markets, Lane emphasized that “whenever net asset purchases come to an end, there will still remain considerable monetary accommodation baked into the system.” Regarding the Euro’s exchange rate, he has “no concern about the current level”. But Lane warned that ” if it moves a lot within a short time interval then you have to think about the implications.”

EU Barnier urged UK to “face up to the hard facts”

EU Chief Brexit negotiator Michel Barnier warned UK that “One cannot have at the same time the status of a third country and demand at the same time the advantages of the (European) Union.” And UK should “face up to the hard facts”. Meanwhile, Barnier is still hoping to seal a deal this month on a transition period after Brexit, and start talks on the future relationship this spring.

European Commission President Jean-Claude Juncker said in European Parliament that “there is increasing urgency to negotiate this orderly withdrawal.” He added that “as the clock counts down, with one year to go, it is now time to translate speeches into treaties, to turn commitments into agreements.” Meanwhile, he urged UK to provide “further clarity” regarding the future relationship.

Australia NAB business condition jumped 3 pts to 21 in February, hitting a record high. However, business confidence dropped 3 pts to 9. NAB noted in the release that “business activity in Australia is robust” and “strength in conditions is broad based across industry groups.” The fall in confidence was seen as reactions to global market “turbulence” back in early February only. But the impact of those turbulence was “relatively limited”.

Overall, NAB maintained that view that RBA will hike by late 2018, but may delay till early 2019. It noted that “we expect by late 2018 the RBA will feel relaxed enough about the domestic fundamentals to cautiously start withdrawing the stimulatory policy stance it is currently running. However, it will depend heavily on the data flow and the risk is that the RBA will delay rate rises until early 2019”.

RBNZ Governor Grant Spencer hailed the success of macroprudential tools in a speech to finance industry professional today. The policy infrastructure including the LVRs (loan to value restrictions). helped limit the risks of surge hour prices. It also helped keep interest low to boost inflation. And, after adopting the policy for five years, Spencer suggested a review would be run with the Treasury to consider ways to expand it. He also suggested to introduce a new committee on macroprudential policy alongside the monetary policy committee.

OECD forecast global economy to strengthen in 2018 and 2019. And, global GDP growth is projected to climb to 4%, up from 3.7% in 2017. US tax cuts and government spending, together with fiscal stimulus in German are the key drivers of the upward revision. However, inflation is expected only to “rise modestly”. And there are risks from monetary policy normalization on exchange rates and capital flow, in particular in emerging markets. OECD also said that “Safeguarding the rules-based international trading system will help to support growth and jobs. Governments should avoid escalation and rely on global solutions to resolve excess capacity in the global steel industry.”

GBP/USD’s break of 1.3929 indicates resumption of rebound from 1.3711. The break of near term trend line resistance suggests that corrective pull back from 1.4345 has completed at 1.3711 already. Intraday bias is back to the upside for 1.4144 resistance first. Break should confirm this bullish case and target 1.4345 high and above. On the downside, below 1.3780 minor support will turn bias to the downside to extend the corrective fall from 1.4345 instead. 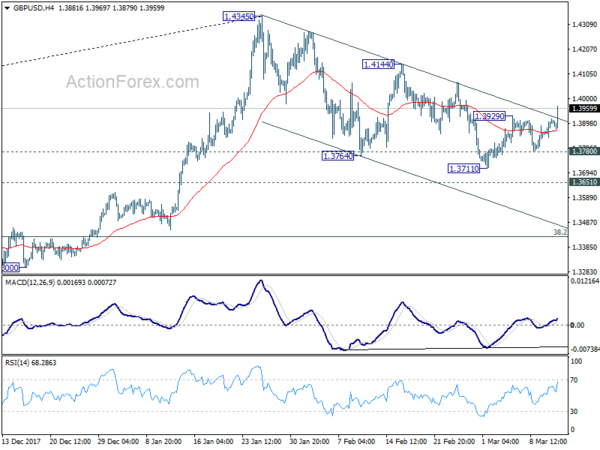 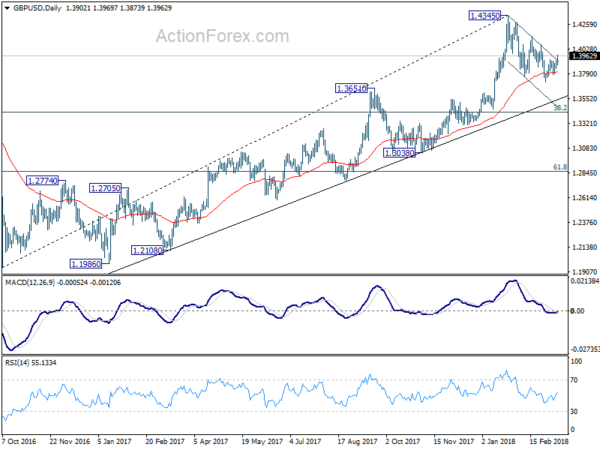