Action Forex
HomeAction InsightMarket OverviewUSD and NZD Weak ahead of FOMC and RBNZ, Sterling lifted by...

USD and NZD Weak ahead of FOMC and RBNZ, Sterling lifted by Job Data

Sterling is staying in the spotlight today as the set of job and wage data boosts the chance of a May BoE hike. The central bank’s announce tomorrow is now rather important as some hawks could come back flexing their muscles. Similar strong for today is Canadian Dollar, riding on positive news regarding NAFTA. On the other hand, Dollar, Aussie and Kiwi are under broad based pressure. FOMC and RBNZ will announce rate decision within a few hours from now. While one is expected to hike and the other is expected to stay dovish, the fate of them doesn’t differ much, at least for today.

Fed is widely expected to raise federal funds rate by 25bps to 1.50-1.75% today. There is practically no chance for a surprise in it. The main question in everybody’s mind is whether Fed will hike a total of three times this year, or four. As usual with a March FOMC meeting, new economic projections will be released. Given that the Republican’s tax cuts were done, there could be upward revisions in growth. Unemployment rate forecast might be left unchanged. PCE core at 1.5% in January, is still way off Fed’s median projection of 1.9% in 2018. There is little chance of a change in that figure. Meanwhile, any slight change in the federal funds rate projection would be market moving. The event also bears additional significance as it’s Powell’s first press conference as Fed chair. Powell might maintain an upbeat tone today and indicate his confidence in continuing the tightening cycle.

The set of data overall should be more than welcomed by BoE hawks. In particular, wage growth is picking up pace and would add to their argument of a May hike. Be ready and we might see a hawk or two vote for a hike in the announcement tomorrow. In particular, UK has the Brexit transition deal in pocket already.

Ifo Institute forecasts German economy to grow 2.6% in 2018, then slow to 2.1% in 2019. It’s head of f Economic Forecasting Timo Wollmershaeuser noted that the calculations “confirm figures from our December forecast.: However, “underlying forces have shifted somewhat.” In particular, forecast for household consumption expenditure was scaled by by 0.5% in 2018, because of lower than expected spending back in 2H 2017. Government spending forecast was raised by 0.5% in 2018, as new government policy will provide a stimulus. Export growth was revised up by 0.5% in 2018, thanks to upturn in Eurozone economy and US tax cuts.

Regarding risks, “the debate over the introduction and/or increase in tariffs on transatlantic trade and the appreciation of the euro are weakening sentiment among German companies.” Also, the new coalition government is “disappointing in terms of reforming the tax and social security system.” In particular, Wollmershaeuser said that was no response to US, France and UK tax cuts.

Canadian Dollar rebounds strongly on news that US will drop contentious auto-content proposal in NAFTA talks. It’s seen as clearing and important road block in NAFTA renegotiation. The Loonie is trading as the strongest major currency in Asian session. There was a demand for vehicles made in Canada and Mexico for export to the US contain at least 50% US content. But Canada’s Globe and Mail reported that this contentious demand was dropped during NAFTA meeting in Washington last week. This is seen by some as one of the US toughest protectionist demand.

RBNZ will announce rate decision in the upcoming Asian session. RBNZ is widely expected to keep the Official Cash Rate OCR unchanged at 1.75%. In the prior statement, RBNZ noted that “monetary policy will remain accommodative for a considerable period. Numerous uncertainties remain and policy may need to adjust accordingly.” That’s clearly seen as easing bias by the markets. We’re not expecting any change in the OCR, nor the slightly dovish stance in tomorrow’s announcement.

No change in EUR/USD’s outlook that price action from 1.2445 are forming a corrective pattern, possibly a falling wedge. For the momentum, further rise remains mildly in favor. Break of 1.2358 resistance will revive the bullish case. That is, pull back from 1.2445 has completed. Intraday bias will be turned back to the upside for 1.2445 and then 1.2555 key resistance. However, firm break of 1.1238 will now turn bias back to the downside, to resume the fall from 1.2555 through 1.2154. 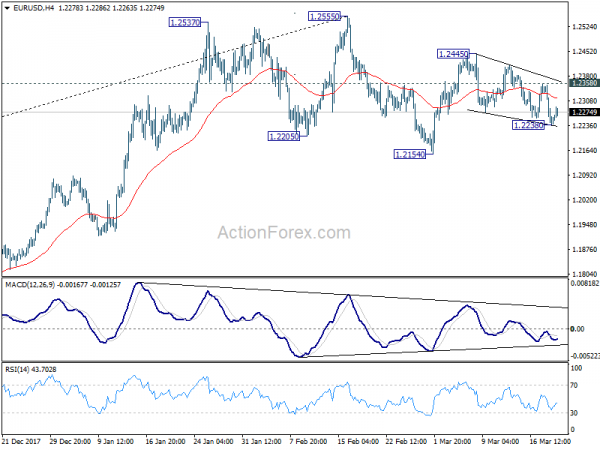 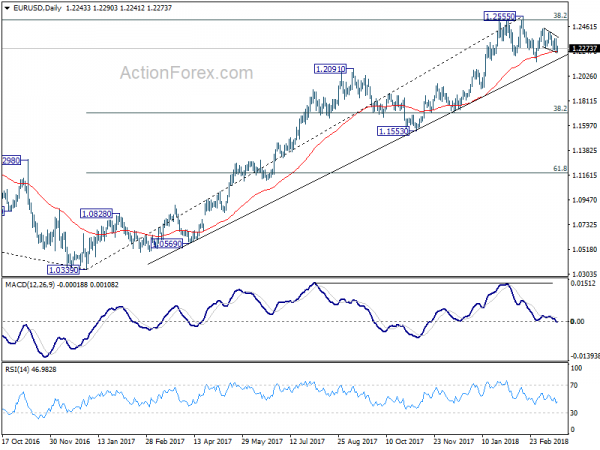