Dollar weakens broadly as another week starts. EUR/USD and USD/CHF extend recent near term move with EUR/USD hitting as high as 1.0749 so far. GBP/USD also takes out 1.2432 resistance. Some analysts attribute the selloff in the greenback to uncertainty over US president Donald Trump’s policies. The markets were generally let down by the lack of details, or even direction other than "America first", in Trump’s inauguration last Friday. Trump reiterated over the weekend that he’s going to withdraw from the Trans-Pacific Partnership trade pact. However, nothing has been said regarding what pushed the markets higher since election. That is, expansive policies with lower taxes and higher infrastructure spending. The greenback will stay weak until the markets get some more clarity on the issues.

Q4 GDP report from UK and US will be the main focus of the week ahead. Dollar and Sterling are so far the weakest major currencies this month, for different reasons. Dollar is weighed down by uncertainties on Trump’s policies while Sterling is pressured by concern of hard Brexit. Traders will likely look pass the GDP data from both countries and stay cautious. Eurozone PMIs and German Ifo will also catch some attentions. Meanwhile, Australian CPI will also be closely watched. Aussie is so far the strongest major currency this month and would look into inflation reading for additional strength.

Canadian dollar was sold off sharply last week after dovish message from BoC governor Stephen Poloz that rate cut cannot be ruled out. The surge in AUD/CAD suggests that decline from 1.0396 has completed at 0.9591 already. More importantly, the cross stayed inside medium term channel from 0.9148, arguing that rise from there is still in progress. Near term outlook is mildly bullish for 1.0396 resistance and above. But overall, the cross is bounded in long term consolidation pattern after making a top at 1.0784 (2012). Price actions from 0.9148 doesn’t warrant a break out yet and the consolidation is still set to extend with at least another medium term decline. 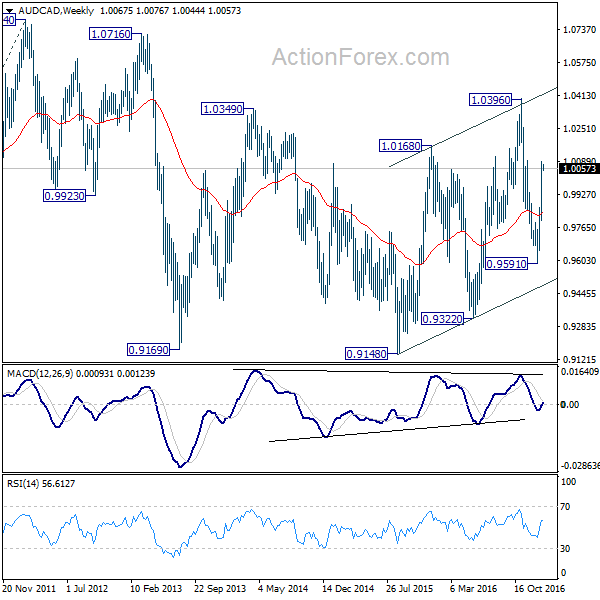 In the bigger picture, rejection from 1.0327 resistance suggests that consolidation pattern from there is still in progress. Fall from 1.0342 is seen as the third leg and retest of 0.9443/9548 support zone could be seen. But we’d expect strong support from there to contain downside. At this point, we’re still expect the larger rally to resume later to 38.2% retracement of 1.8305 to 0.7065 at 1.1359. 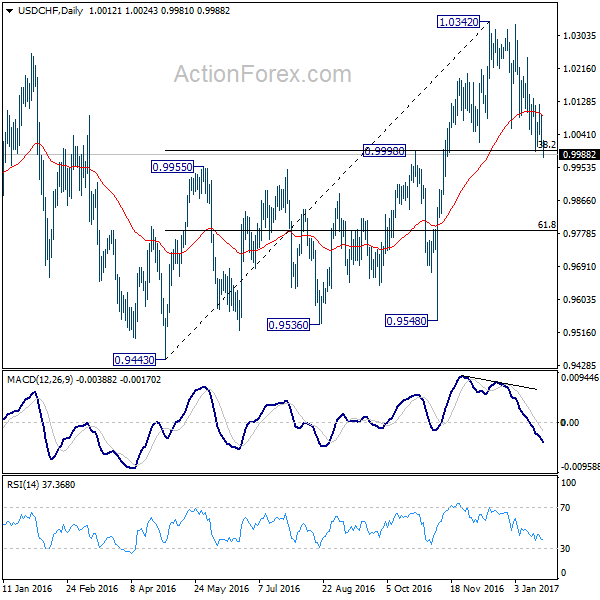